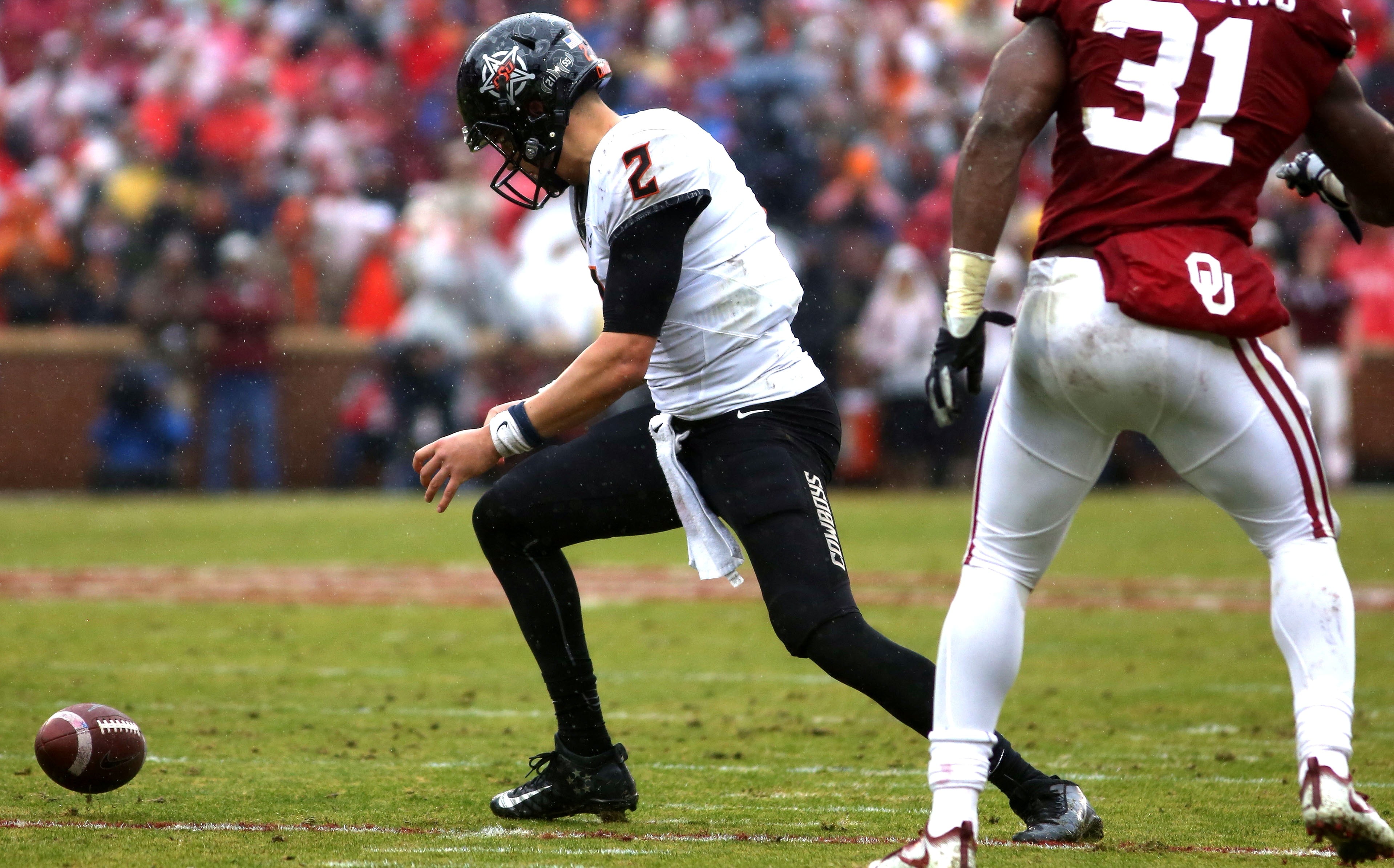 Maybe PFB is having an existential crisis. Maybe not. But reader (and OSU student) Jordan Miller sent in these six questions/comments, and instead of just responding via email where only Jordan could see, we decided to responded publicly so all of you could share our agony. Here they are.

I was so excited for this game, so hyped after how we dominated TCU and developed a run game. Statistically speaking, it should have been a close game, so naturally my hopes for this team were really high. Then the second half happened and we were left getting dominated on both sides of the ball. Am I stupid for thinking we could actually roll with the Sooners?

We feel the same way. There is a naivety that seems to be erased with 12 months of time every single year. I don’t think you’re stupid for getting your hopes up. I think OSU just played a bad game at the worst time. And we might have some big Gundy issues.

2. What in the world do you guys see in Yurcich?

Let me preface this by saying I’ve been trying to have an open mind about him. But what I saw against Baylor and OU this year was too much to make me think he is good. This is OSU. One of the first teams to adopt the air raid, up tempo offense. I understand we need a run game. I love how that has developed. But we constantly put a group of tremendous athletes on the field that have little yield in points scoring. I do not want an average offense because we cannot rely on our defense.

I see a top-20 offense going into Bedlam that took a poo in its own bed. Is it flashy? No it is not. But it is efficient, and Gundy likes the continuity a guy like Yurcich offers (i.e. not getting hired after a year or two). I’d say Yurcich is pretty strong but not elite. I also wonder if he’s able to adjust as well on the fly as some other top coaches.

3. Glenn Spencer is the truth

He is one of the best defensive coordinators I have seen at OSU. His defensive game plan was tremendous and we were a couple blown coverages away from holding OU to a touchdown-less first half. We stopped the run and forced mayfield to make plays with his arm which is what I thought we needed to do.

It’s true that Spencer has come on strong the second half of the year, but the reality is that his last few defenses have been outside the top 70 in the country in points per drive given up. This is bad. OSU *basically* gave up 45 to OU which was 3.46 points per drive which is their average. And this is with Sinor pinning them on their own 21 on average.

He had an elite defense in 2013, but he has been largely average throughout his career at OSU. He gets a free pass because he does flying chest bumps with college kids and seems like a great guy.

4. What do we do if Rudolph leaves?

Rudolph is a far from perfect quarterback but I have been raving about him since the spring game in 2014. We are very reliant on his ability to make plays and after he is gone, I don’t see Cornelius, Wudtee or Kolar being nearly as good. Rudolph has become a much better decision-maker, but worse athlete? I think Rudolph has a much better arm than Chelf, but Chelf played lights-out in big games. Which leads me to again question: what do you see in Yurcich?

First off, Rudolph is not going anywhere this year. But if he were, the quick answer is that OSU would take a step back offensively. Aside from last Saturday *and a couple of games last year* you’re right. He’s been very good.

Oklahoma State will be just fine if he does leave. But the offense would be a far cry from what it is under MR. Wudtee could end up being the guy, but I wouldn’t be completely surprised if true frosh Jelani Woods, and early enrollee, could push for time if given the opportunity.

I am tired of having a good team that can’t beat OU. I really don’t think we should get rid of Gundy because he has done so much for our program both on and off the field and wouldn’t want anybody else (except Saban?) coaching this team. What is the answer? Are we destined to be little brother forever?

Wow. Let’s get right to it. Oklahoma State had a .016 win percentage against OU in the 99 years before Gundy took the job. During his tenure? It’s been .016. I don’t know if that means OSU is destined to forever be “little brother”. But in a state that has accounted for only 1.2 percent of the nation’s “blue-chip” players in the last five years, the Cowboys will always have to compete with Oklahoma. As much as it pains me, I think OSU will have a tough time as long as Stoops manor is stationed in Cleveland County.

I have been to every game this year (home or away) except K-State and TCU. I was lucky enough to have a roommate who is a player that was able to get me tickets to most, but I paid $70 to see OU blow us out. I don’t particularly want to pay upwards of $100 to go to San Antonio (I assume) and get beaten by USC or Colorado. On the other hand to my senior year and this is the last chance I have to go as a student to a bowl game. What’s the play?

I have always been a proponent of not telling a grown person what to do with his or her money. But with that being said, I think San Antonio is a great place to be on New Year’s Eve weekend. The weather should be great comparatively.

Also, I think the Cowboys have a great chance against Colorado. The Buff’s defense has been good and they are the favorite on paper, but I think Mike Gundy coaches these types of bowl games different than New Year’s Six bowls and even Bedlam. He’s probably more comfortable or something like that. San Antonio is good for recruiting. It’s good for the alumni. And it’s good fun. So why the heck not?