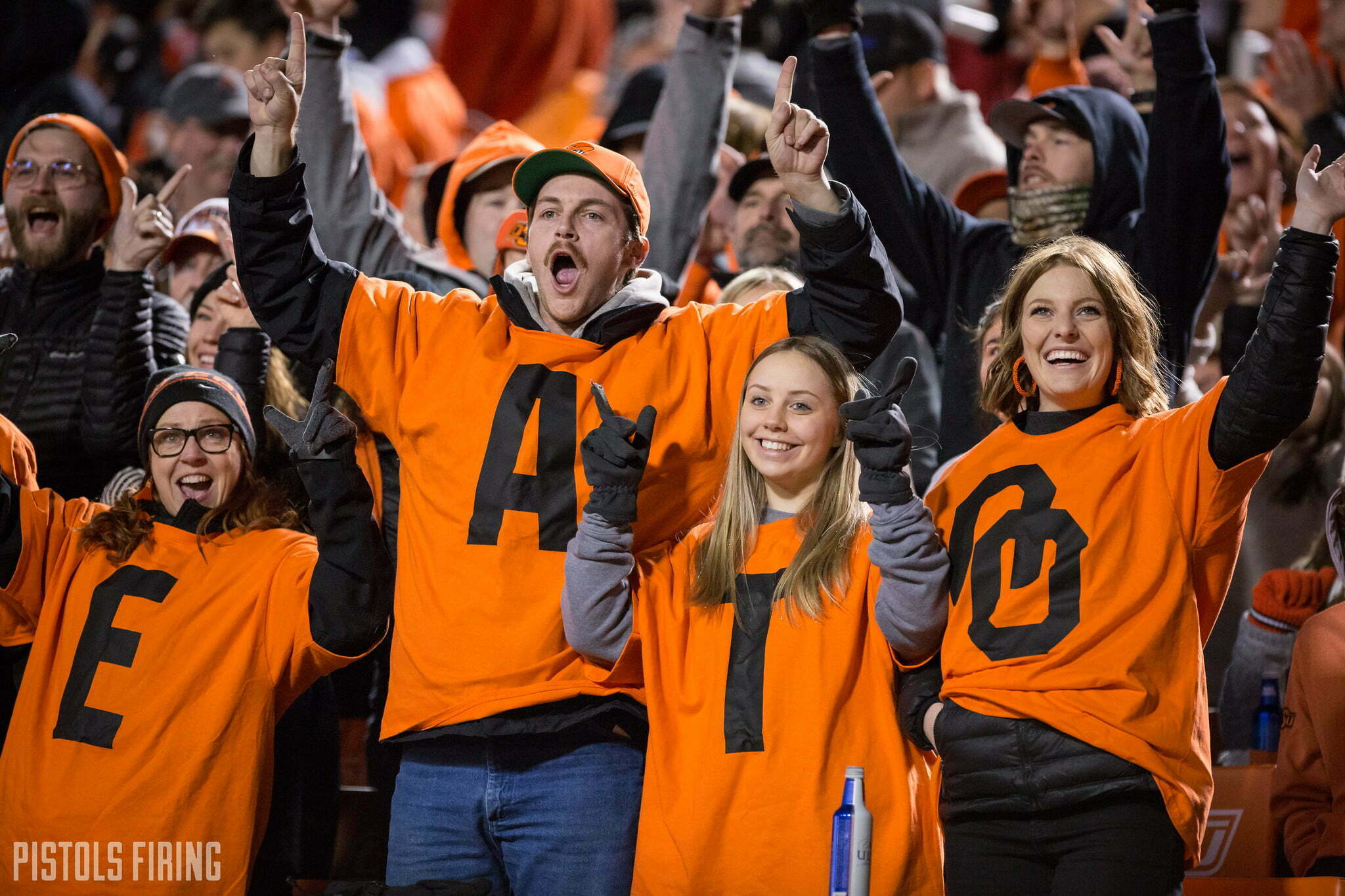 Got some great emails (and some legendary ones) from readers this week. Here’s one of the better ones from James E. (which Carson and I discuss on the podcast as well).

I’m sitting on some hot takes and I don’t know what to do with them so I figured I’d force you to read them.

Okay so here’s my thing. I love Gundy, and I don’t think we need to fire him or anything like that because he’s changed our program in ways no one ever imagined. But I challenge you to write a pros and cons list for Gundy. What is he exceptionally great at? What are his improvement opportunities? What do you wish he did that he doesn’t do? What do you think other coaches can learn from Gundy?

Is he an offensive guru or was that all Monken, Holgerson and Yurcich? Does he turn 3-star players into 5-star players (Blackmon, Weeden, Washington) or does he turn pros into utility players (Tyreek, Jarwin, Tyron). Clearly he’s good at establishing culture but is that worth losing talent on the recruiting trail? After you finish your pros and cons list, are you okay with that list being in charge of OSU football?

Okay rant over. I’d love to hear your thoughts

I laid most of this out here, but I’ll add to it a little bit. Gundy is great at the following two things.

1. Program building. I can’t emphasize enough how difficult this is. I can barely lead a team of, like, eight other humans to make content every day. Gundy had to construct an infrastructure featuring 200 people and move them all in the right direction.

2. Institutional knowledge. You can’t buy this one either. Gundy understands what nine wins looks like because he’s been doing it for 15 years. That sounds simple, but when you know exactly what something looks like and know the paths you’ve taken to that destination, it’s a lot easier to get there than it is for somebody who doesn’t and hasn’t.

I think Gundy is pretty good at hiring, too, but I’d throw that into program building. And hiring is the primary way you boost player development, which they’ve also been pretty good at. Or — I’ll say it this way — they’ve been good at creating systems in which players shine in college and get drafted maybe a little higher than they should.

Their two best pros in his time there are probably Dez and Tyreek (I’ll listen to Okung arguments, I suppose). They were two of the top-12 recruits (out of high school) in program history. One they used perfectly, the other they couldn’t figure out at all (although he did save Gundy from being 1-14 in Bedlam).

I would say Gundy is above average at player development but better at system development, given they haven’t had that many great pros and most of the great ones they have had you knew were going to be great out of HS. He’s also good at either finding or developing QBs. The lifeblood of the Gundy era has been elite QB play.

He’s bad at recruiting (willfully so!) and I guess fine at in-game coaching. Their game plans are generally pretty good, but I’d have to say he’s been pretty weak in recent years at preparation — having his teams play down to their competition instead of setting the bar. It was always a staple that OSU was going to beat teams it should beat. It hasn’t been for a few years now.

It’s a conundrum though. Because you can’t say well he stinks at recruiting but also his teams should beat X, X, X and X. Technically speaking, OSU shouldn’t be beating the TCUs and Baylors because they aren’t out-recruiting them by that much. Same with Texas and OU. But for the most part — and especially with Texas — they are beating them. Other than OU. So that to me goes back to infrastructure and systems. Invaluable stuff.

As for the Iowa thing, I have no good response. Iowa — as an aside — scored 12, 18, 19 and 22 points in games this year. This is almost impossible. I would imagine they’re the first team in post-WWII college football to have four scores of those exact numbers.

Anyway, when you look at the two teams side by side, it’s a tough scene for OSU fans. A lot of Alamo Bowls, a lot of losses to OU (Wisconsin), few bad seasons, few elite ones, long-time coach, tons of postseason appearances, one 12-win run.

PLASE DON’T LET THIS BE TRUE! 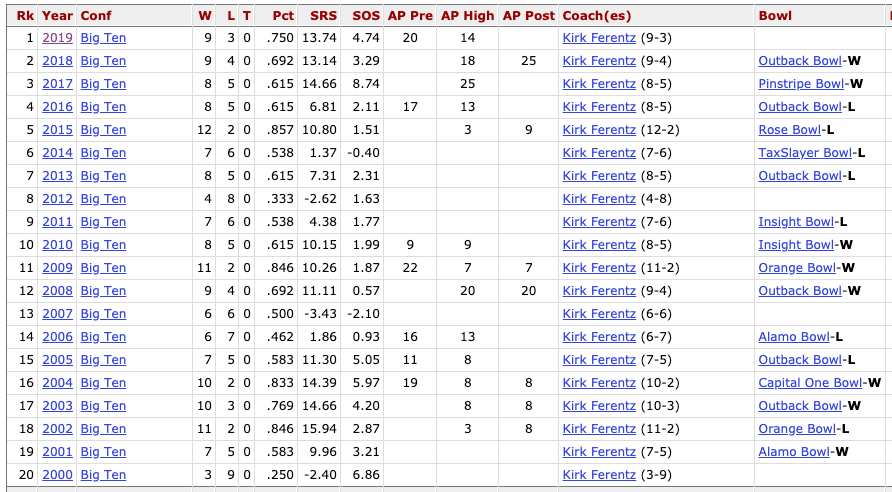 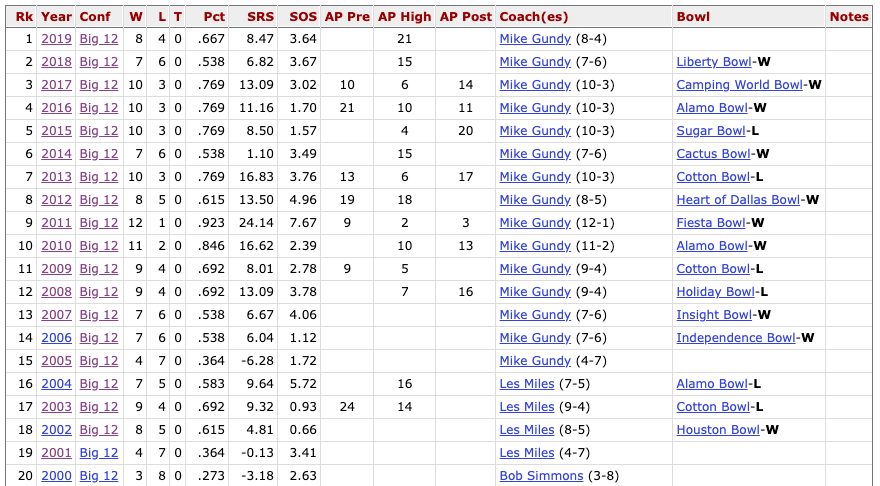