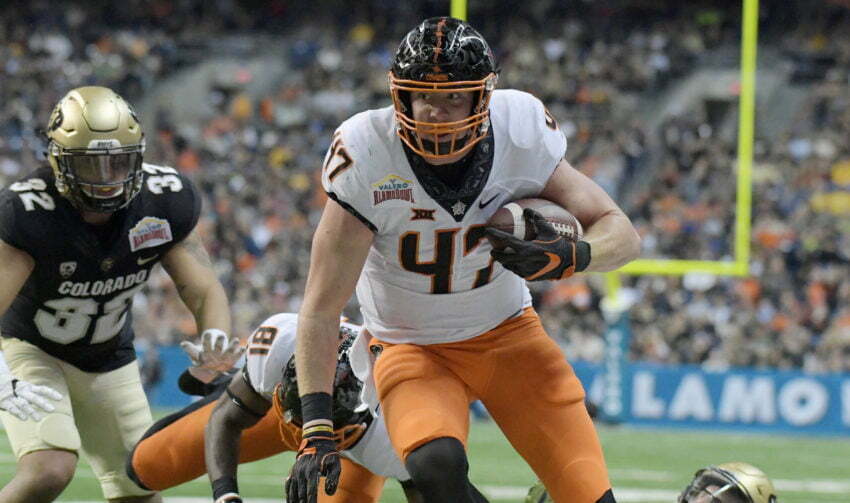 The Oklahoma State Cowboys head into the 2017 season with arguably the most talent they’ve ever had at the wide receiver position. But head coach Mike Gundy has made it clear on how important it is to get production from the cowboy back, OSU’s fullback-tight end hybrid. Many are calling for the Pokes to significantly minimize the role of the cowboy back, while some even want the position to be eliminated completely. Here’s why that won’t happen:

Even while more and more teams are turning to variations of the spread, the tight end hasn’t become obsolete. In fact, according to ESPN, the usage of tight ends among Power Five teams has actually increased in the past five years. Although the traditional tight end (primary blocker, treated like a sixth lineman) has become a rarity, teams have devised ways of incorporating tight ends into their offenses. The tight end, especially the modern, catching-oriented prototype, is a matchup nightmare for defenses. The ideal spread tight end is one who’s too big for cornerbacks or safeties and too fast for linebackers. Despite relative inexperience, converted wide receiver Keenan Brown is pegged to play that role for OSU in 2017, just like Blake Jarwin did for the Cowboys a year ago.

The position has value by creating matchup problems in other ways, too. One of the biggest advantages of using a cowboy back is the formational diversity it brings an offense. When they were used in 2016, the CW moved all over the field in various formations, and defenses often couldn’t adjust quickly enough. The Cowboys moved the CW everywhere — from the split end to the slot to the backfield, players like Jarwin and Zach Veatch played from a number of different spots. Such movement creates difficulties for linebackers, who are often responsible for the tight end or fullback. Even the slightest change forces the defense to adjust, and the tempo makes it tougher to identify offensive tendencies.  This touchdown drive against Texas Tech serves as an example of the Cowboys using different formations with tempo, and in this case, on four consecutive plays:

Changing formations at a high tempo can create confusion for any defense, and when a team doesn’t allow time for its opponent to identify the formation and properly align, defensive responsibilities like run fits and assignments become much more difficult to identify and execute.

But the biggest reason why it will be used this season, and the reason why the position was created, is to run the ball. Coach Gundy spoke on the position’s importance in the run game multiple times during Big 12 Media Day. “We need somebody that can play that role, maybe not to the level we had last year … but that’s a very important part of what we did with our offense and what we need to do in the future,” Gundy said. “It allows us to run the ball much more effective.”

The Cowboys had a strong run game in 2016, and it was significantly better than theirs two seasons ago. The increase in talent aided the Pokes’ raise in production, but the cowboy back played a role as well. The cowboy back helps because it acts as an extra blocker while simultaneously enabling the offense to have diversity in the run game without getting overcomplicated. Take OSU’s usage of the CW in the TCU game, for example, when the Cowboys had 334 yards on the ground.

This isn’t the only example of the CW being used in the run game. In fact, this was one of OSU’s eight games with over 150 rushing yards, and the cowboy back played a role in each of them. This season should see more of the same, because even with a potent passing game, an offense has to have an adequate run game to succeed. “If you wanna throw the ball deep you gotta run the ball.” said cowboy back coach Jason McEndoo in a PFB interview. “You gotta suck them up on defense to get the ball over their heads. But if you can’t run the ball, they’re gonna play back and not let [receivers like] James Washington get behind them … the cowboy back’s obviously been a huge part of [OSU’s run-game success], and we’re gonna continue to do that.”

It would be foolish to think that OSU will use the cowboy back on every play next season. With their current receiving talent, it’s in their best interest to use 10 personnel formations (one back, four receivers) fairly frequently. Additionally, OSU only used the cowboy back on roughly one-third of their plays last season, and they’ll likely use it slightly less in 2017, but the position will probably be sprinkled in on most drives. After all, an offense that frequently interchanges personnel can be a headache for a defensive coordinator. The Cowboys have the potential to do big things this season, but don’t forget that the cowboy back will, and should, have a role in it all.

How much would you use the cowboy back? Leave you answers below in the comments!