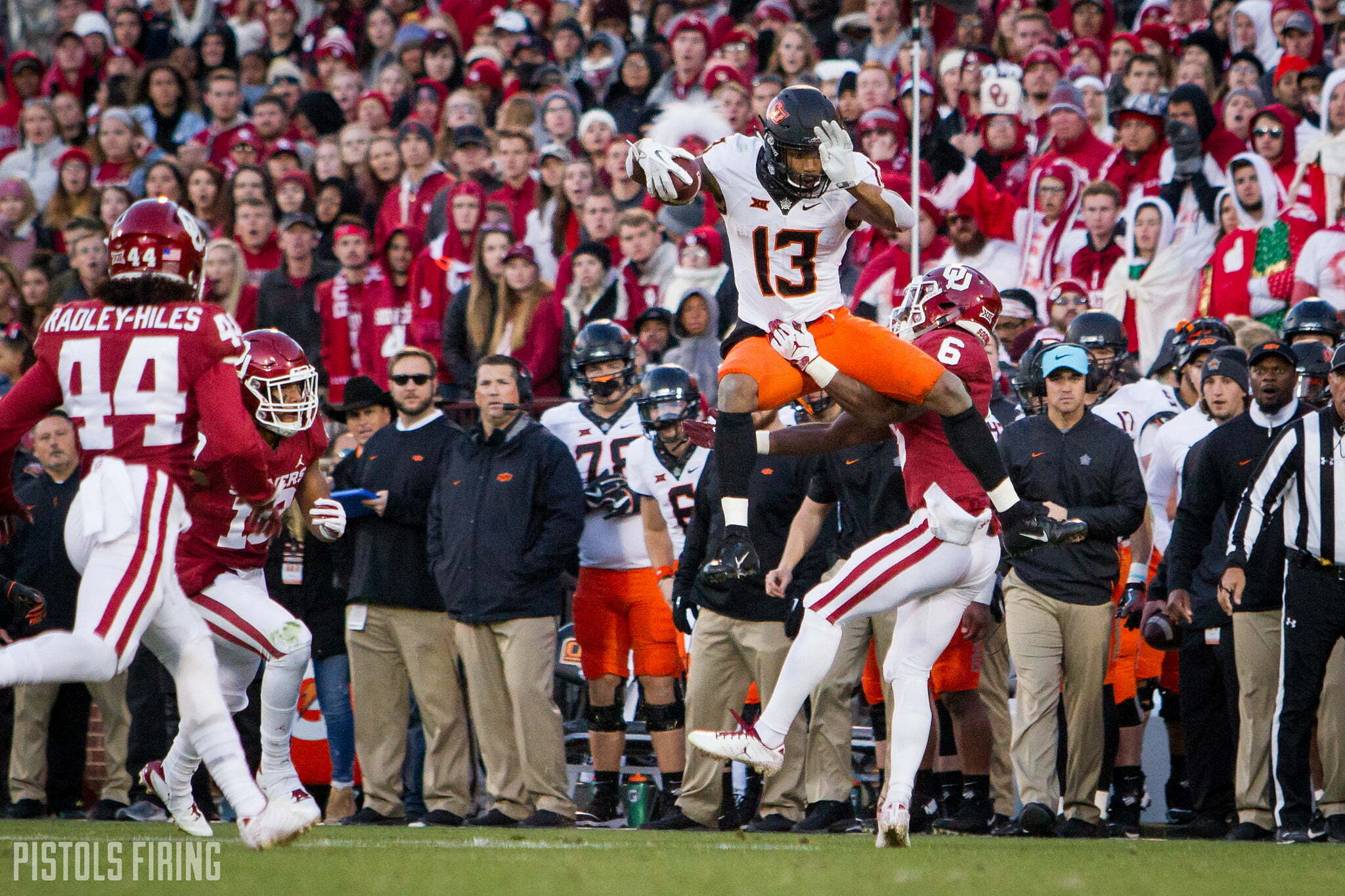 The 2018 regular football season is in the books and — though, at times it didn’t feel like it — we learned quite a bit from and about this team. There were a few pleasant surprises and even more ? moments.

Before we learned any of that, the PFB staff laid out 15 preseason storylines to watch going into that season opener. So let’s revisit them through that 20/20 hindsight lens.

Justice Hill was the Cowboys’ leading rusher, so no surprises there. But a nagging injury limited him to 10 games and halted him on the precipice of his third-straight 1,000-yard season.

J.D. King impressed in spurts during his true frosh season in 2017 and was expected to retain the RB2 role throughout 2018 — especially after showing that he could power clean the combined weight of his fellow backs during the offseason.

But Chuba Hubbard ran like a quick gust of north wind and quickly established himself as Justice Hill’s backup. LD Brown also contributed to the effort, especially after King announced his intention to transfer after nine games

The top four guys all saw meaningful reps and on-field production and injuries seemed to be the deciding factors, so I’ve got no gripes with how carries were distributed. The Pokes lose a lot in the backfield heading into 2019, but at least appear to have a star in Chuba who looks ready for a starting spot as a sophomore.

Storyline No. 14: Will Rodarius Williams and A.J. Green have to play as much as they did in 2017?

The returning duo of cover men have each started every game this season and shouldered a heavy load. Even more so than last year when you consider the youth at safety OSU is dealing with.

As Marshall Scott pointed out, despite the big plays OSU has given up — that’s going to happen when you play the part of Wilson to each Big 12 team’s Tom Hanks on a weekly basis — the CBs performed admirably, all things considered.

The good news is that there are a slew of young corners, some of which were able to retain redshirt status, who saw varying degrees of experience and should be able to help out next year. Tanner McCalister played in eight games and will not redshirt but other frosh like JayVeon Cardwell and Gabe Lemons did. All should see an increased role next year, as well as more seasoned vets like Kimah Siverand and Tyrell Alexander.

Storyline No. 13: Is Tyron Johnson the X-Factor for OSU?

Tyron was not OSU’s No. 1 option in the passing game, but when he got his opportunities, he mostly took advantage.

Mr. ? racked up 704 yards and six total TDs, and added big play after big play as a nice compliment to OSU’s Biletnikoff finalist, who we will get to later.

I wonder how much more we could have seen from Johnson if not for the early season inconsistency on deep passes by Taylor Cornelius. Cue the comment section ire.

Storyline No. 12: Which Cowboy Back will emerge for OSU?

Last year at this time, Woods was sitting in the QB room with then fellow backup Taylor Cornelius. A few months later he was catching passes from him.

The rangy freshman’s 120 yards and two scores will hardly earn him buzz outside of Stillwater, but his 6-7, still developing frame, should make him all the more dangerous a weapon as time goes on.

Storyline No. 11: How does a reloading year shape expectations?

While (at least) my expectations coming into this past August were tempered, I didn’t not see a 6-6 season coming in. A retool/reload, at times, looked like a rebuild.

The frustrating thing is that while the disparity at QB was stark for good chunks of the year, you can’t point to just one issue. It was a bad game by the offensive line here, inconsistency from Corn there, then a head-scratcher from the defense.

Then just when you’d thought, this team had gotten it figured out, they lay followup eggs to their three biggest wins of the season.

The inconsistency, which is largely a result of a lack of leadership, made this team almost impossible to figure out and even harder to predict.

Storyline No. 10: Why is Mike Yurcich not more beloved in Stillwater?

Is Yurcich the best playcaller to ever grace a motel room in Payne County? Absolutely not. Is he vastly underrated by at least an outspoken minority, if not the majority, of OSU fans? Yep.

I will not copy and paste the same evidence that we’ve laid out several times on these pages in clear, easy to understand facts. OSU’s offense has been mostly really good with Yurcich’s hairline between the ears of its headset, and it’s been elite for a significant portion of his tenure.

Why is he not more beloved? When I type it out, it seems silly to ask. Fans rarely show an affinity for their team’s offensive coordinator. Add to that the fact that he came from a Division II school that no one outside of *checks Google* Pennsylvania has ever heard of, and throw in some silly LEGO jokes, and I guess that’s it.

Storyline No. 9: How much better will the offensive line be in 2018?

I think it was better, but I can’t say it was significantly better looking at the entire season as a whole. Part of that was due to injury, but even early, the group had some rough patches.

As far as the injuries go, 1) they happen 2) OSU needs to get to the point where a turned ankle doesn’t have such drastic effect on a season. That takes time when you are left with an empty cupboard — although it has been five years now — and Josh Henson seems to be the guy to get OSU there, but it’s like watching paint dry. That is, if the paint randomly missed its assignment and got pancaked in the backfield on top of its quarterback.

That being said, I think 2019 should be the year we truly judge Henson on. He will have two classes of his guys in the fold and will have had three total years in the program (including his year as an analyst). All in for the O-line renaissance coinciding with the start of Spencer Sanders’ tenure.