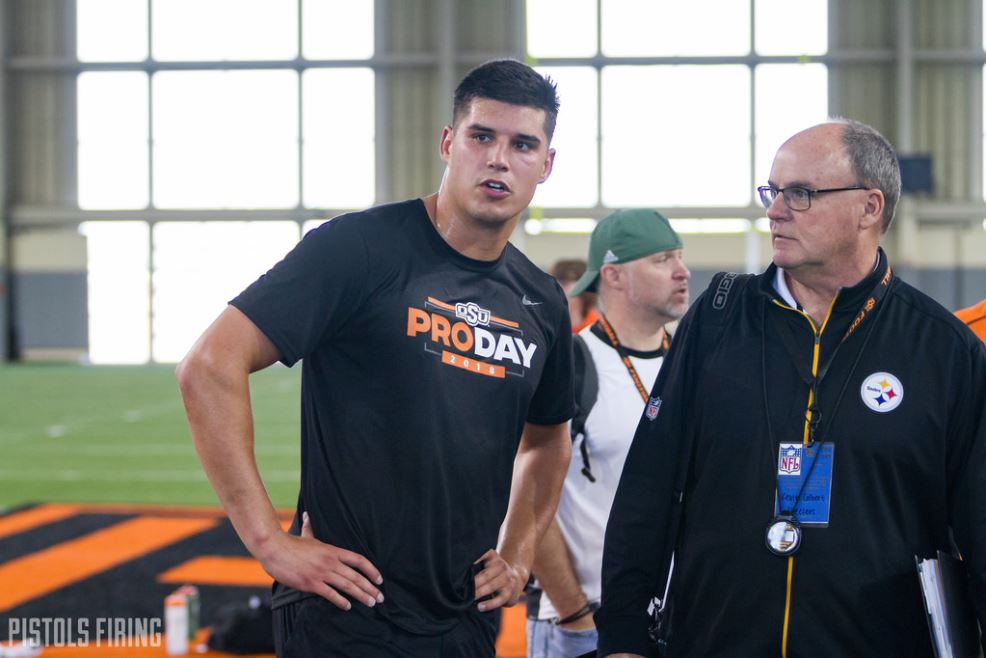 The NFL offseason continues to roll on. On Thursday, teams concluded the final day of their mandatory minicamps and now look forward to the start of training camp just over a month from now.

Let’s check in with several former Pokes and where they sit heading into the summer.

When Mason Rudolph was selected in the third round of this year’s NFL Draft, there was little doubt what the Steelers’ intentions were. They had placed a higher-than-third round value on him and scooped him up with the hopes that he can be their franchise QB of the future.

But the speculation as to where Rudolph sits on the Steelers QB totem pole has been wide-ranging. As recently as last week, the thought around the Steel City was that Rudolph was likely to be no higher than QB3 if not QB4.

According to Steelers.com’s Bob Labriola, Landry Jones (our favorite Sooner QB) would probably enter Week 1 as the established No. 2 behind Ben Roethlisberger and Rudolph and second-year quarterback Josh Dobbs would duke it out for No. 3.

While Jones would be the team’s No.2 quarterback if it started today, don’t be surprised if Rudolph makes a run at this job while creating a competition position battle heading into Week 1 of the regular season. Simply put, it’s going to come down to how much Rudolph continues to impress Pittsburgh’s brass. Even though Jones has the reps and live experience, Mike Tomlin’s philosophy has always been to play the best players regardless of age or experience. That could lead to Rudolph eventually beating out Jones for his job…as long as he takes care of his business against Dobbs first. [247Sports]

But Rudolph has impressed (as much as you can in shorts) through rookie minicamp, OTAs and now through the veteran minicamp that concluded on Thursday.

According to Ed Bouchette of the Pittsburgh Post-Gazette, Rudolph’s candidacy for the job of Big Ben’s backup may be picking up some steam.

It does not mean others watching Steelers practices since the rookie minicamp in May held back their own thoughts, and among the most significant is this:

Quarterback Mason Rudolph lived up to their expectations and then some. He has performed better as a rookie than any other quarterback they’ve drafted since Ben Roethlisberger, and they think he can compete in training camp to become his backup. [Pittsburgh Post-Gazette]

“Mason has been everything we’ve asked,” Fichtner said. “Throws obviously a nice ball. The physical tools are all there. Obviously, mentally and learning is an acquired taste that comes through reps, physical reps and in-helmet perspectives, things that you’re not going to get and it’s not going to happen overnight. I just thank God every day we have the opportunity to have a franchise quarterback.” [ESPN]

Fichtner, who spent the last eight seasons as Pittsburgh’s quarterbacks coach took over as offensive coordinator in January but retains his role coaching QBs. Roethlisberger has his concerns about the lack of a dedicated position coach, according to an article by Mark Kaboly for the Athletic, but the young QBs (Rudolph included) seem to be on board so far.

“I know I have coach Fichtner and he can cover all the bases and does a great job,” Rudolph said. “He can do everything from your footwork to your mechanics to understanding the offense and calling the plays. He has a lot on his plate and he’s doing a good job of facilitating all the quarterbacks.”

Mason Rudolph said he and Josh Dobbs are scheduled to run most of the offense in Thursday's Steelers minicamp. 'Looking forward to tomorrow,' he said.

Here’s Rudolph on some of what he’s learning from Big Ben so far.

It’s possible that Pittsburgh doesn’t keep four quarterbacks on the roster into this next season, but the Steelers’ current cap situation could allow them to keep all four. Josh Dobbs might be the obvious choice if someone were to be let go sooner than later.

If the QB room is still four-deep at the end of 2018, the Steelers will have another decision to make with Landry Jones in a contract year. If Rudolph has shown that he can be at least a dependable backup, the Steelers could let Jones walk in lieu of the possible future franchise player with a more team-friendly price tag.

Rudolph and the remaining rookies will continue working out through next Wednesday before their last break of the offseason. Pittsburgh’s training camp kicks off on July 25.

Rudolph Wasted No Time Getting out in the community

Rudolph along with some of his new teammates, took time to visit UPMC Children’s Hospital in Pittsburgh.

This is par for the course with Rudolph as we saw during his time in Stillwater. In a recent Q&A with Steelers.com, Gundy said as much about what he and Washington will bring to the Steelers organization off of the field.

More from the Twittersphere

• Washington has a blueprint for early success in Pittsburgh with last year’s rookie breakout JuJu Smith-Schuster. On Wednesday, Smith-Schuster talked about some of what the rookie needs to learn heading into his first training camp.

JuJu Smith-Schuster gives advice to rookie James Washington and is ready for an expanded role in the Steelers offense. “This is why I’m here,” he said Wednesday. pic.twitter.com/SmOD7qxHXu

Comin' in at #48 on the #NFLTop100, @CamHeyward stopped by to chat about Big Ben/Mason Rudolph, the absence of Le'Veon Bell at OTAs, and the @Steelers' upcoming season! ⤵️ pic.twitter.com/S9BDKAD6MD

• Marcell has been mostly flying under the radar since he slipped all the way to Round 7 in the draft. But if he can make a name for himself among a crowded WR room, he’s still got a chance to be a valuable tool at the next level.

When pressed at the LOS, Ateman recorded a passer rating of 152.65 when targeted, which ranked 3rd among the 164 FBS pass-catchers with at least 15 press targets in 2017.

• A couple of former Cowboy safeties showing out in minicamp.

• If you pay close attention, you can catch Chris Lacy in this OTA promo from the Detroit Lions. He’s wearing No. 18.