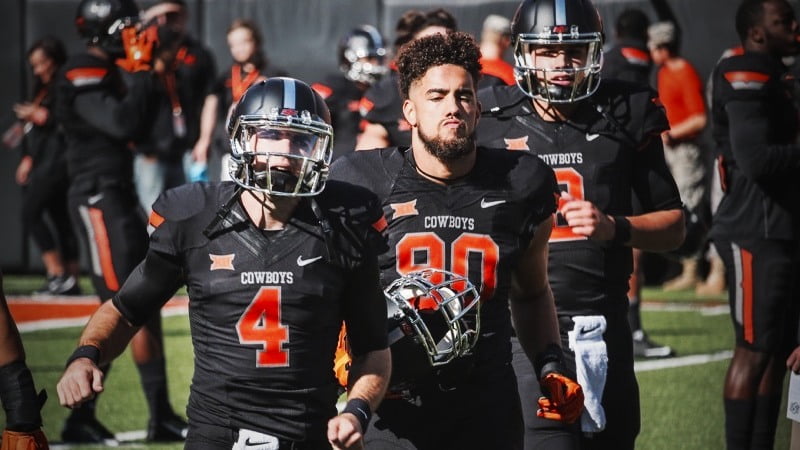 I’ve been thinking a lot this week about the differences between 2011 and 2015. The only two 10-0 teams in the 114-year history of Oklahoma State football. That 2011 team was like watching a painter paint his masterpiece in a soundproof glass box from 100 feet away. Breathtaking, but completely removed from reality. That team was, by the sports definition of the word, unreal.

As OSU fans, we’d never considered, much less experienced, anything like it.

This 2015 team is wildly different and yet, somehow, just as accomplished. The experience of rooting for them every Saturday is totally other from that 2011 experience thought. As if somebody shattered the soundproof glass box and told those of us watching that we had to help the artist paint his masterpiece in under three minutes by handing him every color he needs. Then doing that 12 weeks in a row.

Evan Epstein came back on our podcast on Thursday and confirmed what I had been considering.

“We knew we were going win every game (in 2011) because we were just destroying people,” said Epstein on our podcast on Thursday. “(This team) knows they’re going to win every game because it doesn’t matter if they’re destroying people or not. They’re just going to win. That’s almost an even more advanced level of temperament. There’s cockiness and knowing how good your team is. Then there’s confidence and knowing how good your teamwork is. Those guys have the latter. It’s tough to beat a team like that.”

It is really, really tough to beat a team like that.

Sure, this team has been lucky. It has caught a lot of breaks. What teams don’t during dream seasons? That’s one of the things that has frustrated me about the College Football Playoff committee. It’s like they’re trying to readjust what should have happened in a college football season instead of what actually happened. There’s a reason going 12-0 is so dang hard and why teams that do it catch a bunch of breaks along the way.

That 2011 team was more like an Alabama powerhouse than any of us were used to. This year’s team is 100 percent orange, through and through. I’ve written before why I prefer the latter (although I didn’t mind the former every once in a while) and I guess that gets at why OSU fans have been so euphoric about this year’s team.

This team is a microcosm for all Oklahomans. Hard-working, gritty as hell and not excited to let you know about it. This team is all Oklahomans. It is not grandiose. It resonates and keeps coming back to resonate some more. We didn’t understand that 2011 team. It was like an alien. This one we get. This one is all of us in some way, bootstraps and all.

And the best thing is that none of this was supposed to happen. OSU was 100-1 to win it all in August. It isn’t even a favorite to win this weekend against a suddenly-reeling Baylor team on its second (and maybe third) QB. That’s how we like it. That’s how it’s always been for OSU teams and fans. This team was what all OSU teams are supposed to be — a year away. A couple of players from being great. Maybe it was going to upset a few teams, have a little fun, but not this.

The unexpectedness is what’s made it feel so grand. The games in 2011 were a relief. Actually, most of the time they were routs. That was fun. But it wasn’t this kind of fun. It wasn’t fun like this every Saturday.

“They need to embrace this moment,” said Mike Gundy on Monday about his team. “All of us do. That’s one thing that I’ve been able to do this year. I really enjoy the team, and I think they’re maximizing who they are as individuals. As a team concept, we’re getting what we can get out of our football team. We put a lot of work in and buy into the system, and then you go home at night and go to sleep. It has been really fun for me.”

It’s been a lot of fun for all of us.