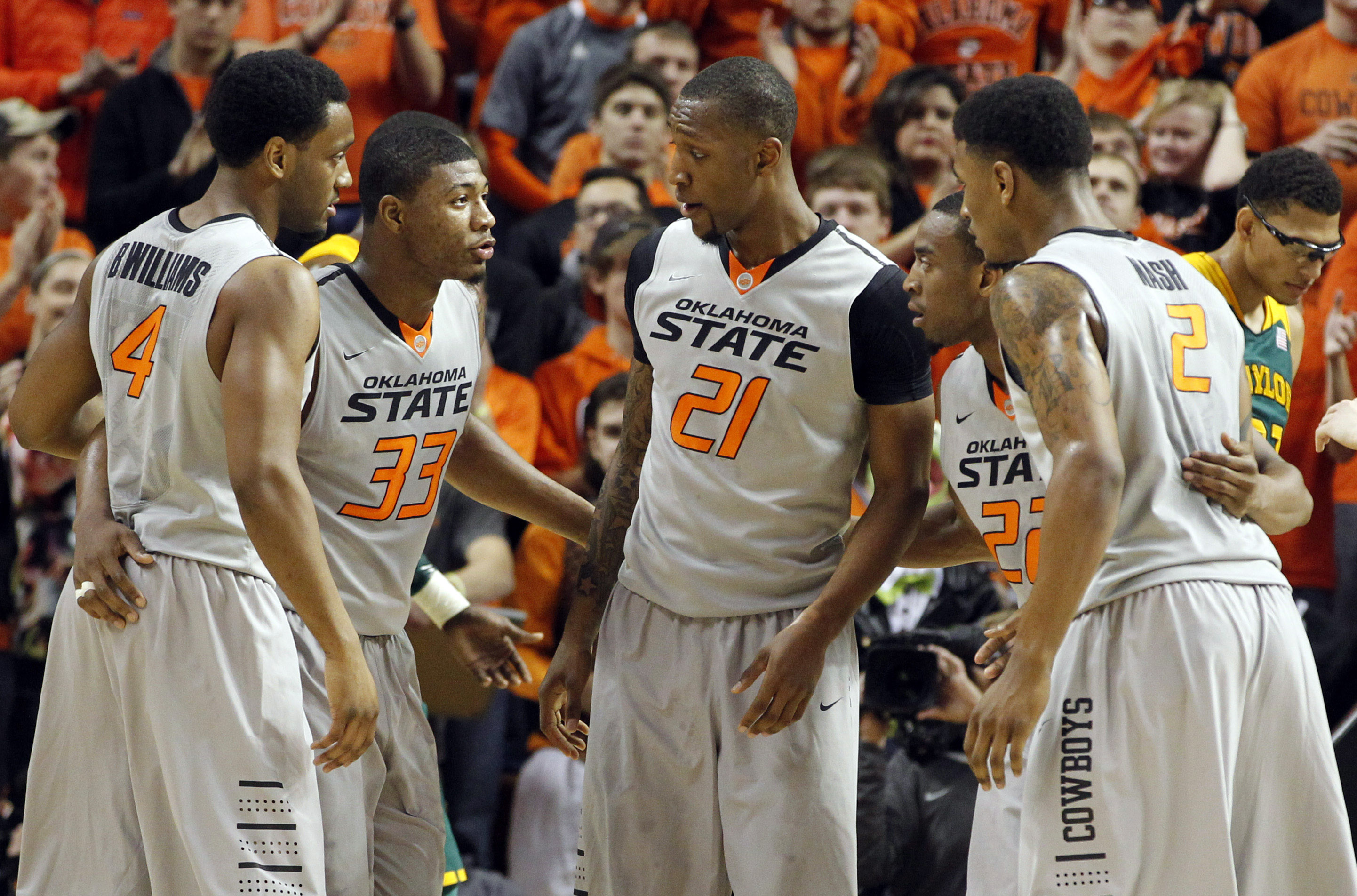 Roundtable Wednesday — OKC Dave, Amilian, and Carson joined me for a discussion on what OSU’s final Big 12 record will be (4-5 right now) and what seed it will get in the NCAA Tournament.

Kyle Porter: Question: What is this team’s final Big 12 record/finish and what seed will it get in the NCAA Tournament (if any)?

Matt Amilian: I see them finishing 10-8 in the Big 12, with wins against Tech twice, Kansas State, TCU and taking two from the remaining games of OU, KU, @ Texas, @ Iowa State and @ Baylor. A lot of people will write off those road games, but Austin and Waco are not difficult places to play and I give us a shot at revenge on the 3OT game.

When I read what I just wrote, I seem way too optimistic.

OKCD: I like your optimism. If this team can get some confidence back, they are very capable of winning some big games.

This is the same crew (minus Clark) that very nearly beat Kansas in Lawrence. A big part of this it is obviously Smart – he has not been himself in this 4-of-5 losing streak. If he can get back on the right path, this team plays with anyone in the Big 12.

I have talked myself into thinking we would win the last three games (@ OU, Baylor, ISU) based this idea. The problem is that we need at least 2 of our big 3 to have huge games to win against good teams. If you don’t have that, there is absolutely no margin for error (turnovers, bad possessions, foul trouble).

I’ve watched every minute of every game and I’m acutely aware of the freefall and I still can’t believe I’m reading that even though I know it’s a viable final outcome.

I’m strangely more optimistic than 9-9 as well. I think they’ll win Tech, Tech, KSU, TCU, Bedlam, Texas (am I the only one who hasn’t bought into Texas?), and one of KU/Baylor/ISU to finish 11-7.

I have no reason other than “a team with Marcus Smart on it can’t possibly be this bad.” They went 13-5 last year! You’re telling me trading Cobbins and Jurick for a more healthy Brian Williams = four fewer losses. I don’t believe that. The overall picture is so hard to see when you’re in the middle of the gauntlet (see 2013 Big 12 football, OU in) but the ship will be righted and I think it could take off once it is.

OKCD: I think you’re making it too complicated with the Cobbins/Jurick/Williams talk. It’s all about Smart. Let’s look at some conference-play-only numbers:

His 2-point FG% is basically unchanged…the issue is that he’s shooting roughly 2 more 3-pointers per game in conference play than he did last year – and he’s missing them. This team basically doesn’t get offensive rebounds, so those shots might as well be turnovers. If he was attacking the paint more like he was last year, he would help the team so much more by either getting fouled, finishing at the rim, or by kicking out to “real” shooters.

If Ford can help Smart realize that he’s hurting the team by shooting us out of games, I can see winning 10-11 games.

MA: Yeah, you have to start looking at some of Smart’s missed 3’s as turnovers. It’s baffling because we don’t need him to hit those shots for this team to reach its peak. Smart doesn’t need a score-first mindset to put up 20 points. When dishes it off to one of the other 4 guys on the court for a high-percentage shot on three straight possessions, those lanes open up a little bit more for him. This seems too obvious. Either Smart isn’t listening or one particular individual isn’t telling him.

Carson Cunningham: I’m of the opinion they would be losing these games even if they had Cobbins. As Dave mentioned, Smart’s shot selection is one of many, many issues. Which is another e-mail entirely.

When I look at the schedule, there’s not one game where I say, “That’s a win” immediately. (well, sans TCU) The three games that will make or break their season are:

• at Tech (only road game left I have them winning, sans TCU obviously. Can we just call them “Sans TCU”?)
• Bedlam
• home vs. Kansas State

If they win those three, I think they finish 9-9 in Big 12 play. With their depth, they’re not making a deep run in the Big 12 tournament, either.

OSU will be sitting on the bubble come selection Sunday. But I think the strength of the conference will get them in.

I mean, like Dave said we are talking about a team that nearly beat KU in Lawrence in a 20-point second half comeback. If you think they’ll finish 9-9 then you believe, again like Dave said (can we just call him “like Dave said”?) that the Smart we’ve seen in the last four games is the real Marcus Smart. Not the “first 45 games of his career” Smart.

I just don’t believe that. Though I think it’ll take Ford or a teammate or somebody (Glenn Spencer?) to motivate/coax it out of him.

OKCD: “If you think they’ll finish 9-9 then you believe that the Smart we’ve seen in the last four games is the real Marcus Smart.”

It becomes less about the team and more about the major changes happening in their lives over the next few months. I’m not sure that Ford can hold things together if things don’t go our way. Still a lot of basketball left to be played, though. I would say it will be fun to see how it plays out, but it might not be.