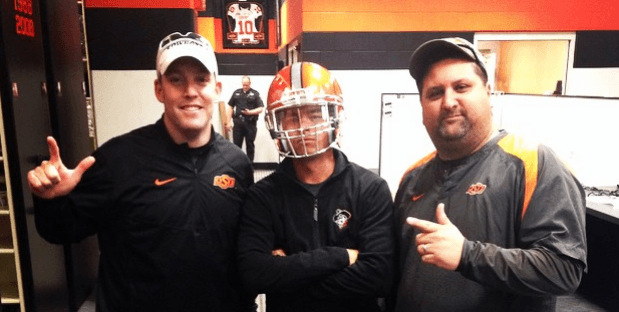 That’s a lot. I don’t know that this stat is tracked nationally but I would wager that nobody else has more than five.

#okstate has seven receivers with a reception of at least 39 yards. @OSUAthletics

If you aren’t following him Kyle Boone is doing a great job covering recruiting for PFB. I haven’t really known how to do it well since I started this site and he continually nails it.

Rickie Fowler really does have the coolest OSU shirts. I presume they’re all sold in Stillwater to the general public which begs the question of whether or not Fowler roams random Stillwater stores until he finds the best ones or if folks just send them to him…?

.@RickieFowlerPGA where do you get all your #OKState t-shirts? You have the best, I've never seen anywhere else. #GoPokes

First official day of practice for them big 12 champs. #okstate #pokenation we won't get tired!! @OSUMBB

He really is. I need to do a power ranking of Pokes in the pros but off the top of my head it’s Dez at No. 1 and then up for grabs at No. 2 between Cox and Bailey, right?

Haha, this made me laugh — Bailey has been insanely good so far for Dallas.

Whoa, this is pretty wild.

He would be a kicker, no doubt.

Beautiful look at the stadium from Saturday. I can’t believe there are only two home games left.