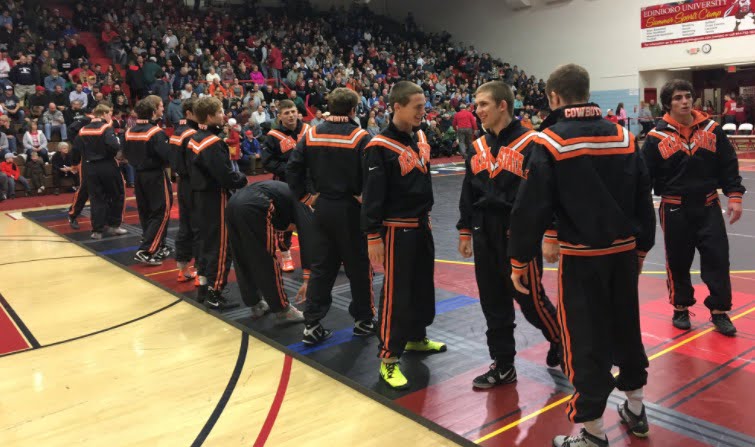 Oklahoma State downed No. 24 Edinboro 24-12 on Friday night before a quick turnaround on Saturday against Kent State. I kept a running diary of the festivities on Friday evening. Here are the highlights as OSU stays unbeaten.

Brock starts fast with the takedown, cut, quick second takedown, cut, and a quick third takedown to take a 6-2 lead. After a re-start, Brock looks to turn Meyer over, and is successful to get the two near fall points. Meyer then escapes to move the match to 8-3, which will hold to the second. Brock starts on bottom, his weakest position.

Looks like coach wants him to work on this position. Brock tries to roll out, Meyers gets him into some trouble with a hold, but Brock gets the escape after a scramble. Brock then starts to attack and gets a single leg takedown. Brock then starts to work from the top position to roll Myers to his back and is successful to get the two near fall points and two back points to end the period with a score of 15-3. Brock starts on top for the third and quickly lets Myers out.

Needs four points for a tech fall. Myers gets a deep single leg, but Brock fights it off. Brock goes for the takedown and tries to score the tech, but can’t finish and the match ends with a 16-4 major decision for Brock.

Dean starts really fast and aggressive with the immediate takedown and goes for the pin. This is a big surprise from a typically defensive wrestler Dean Heil. Unable to get the fall, but starts with a quick 6-0 lead. Heil continues to work from top to roll over, gets in to deep, and Lugo is able to get a reversal. Heil gets out quickly.

Heil gets another takedown, and takes Lugo to his back for four more points. Will take a 13-2 lead into the second period. Heil starts on bottom. Heil gets a semi-peterson on Lugo while trying to escape, gets near fall points, gets the reversal, and gets more near fall points. Match is stopped due to a tech fall for Dean Heil 17-2.

Wrestlers start with some hand fighting. Lugo gets a shot in on Collica’s face and the refs restart with a talking to. Collica gets in on a single leg and executes on a Lugo escape to get the takedown. Lugo gets the escape and a shot, but can’t convert. Lugo being very physical while Collica is wrestling smart. 2-1 Collica to end the first. Collica starts second on top.

Collica gets a tight hold around Lugo’s waist and is building riding time. Lugo can’t do anything from the bottom due to Collica’s tight hold with his leg. Fans call for stalling on Collica, which might be the most ridiculous thing I’ve heard from a fan in a while. Collica rides out the entire second period. Very impressive display. Collica starts on bottom for the third. Collica gets the escape, 3-1 for the Cowboy with two minutes + of riding time. Collica holds off Lugo for the 4-3 decision.

Looks like Joe Smith is going to continue to be held out. Not sure why he is not wrestling. Hopefully PFB’s new correspondent on the ground in Stillwater can help us out with this one. Dolan takes a nice shot and finishes the duck under takedown. Dolan maintains the top position for the remainder of the first and finishes the period with some short time near fall points.

Dolan goes into the second 4-0 and elects to start on bottom. Delande eats away on Dolan’s ride time in the second. Delande gets a deep cradle and turns Dolan to his back. Not a good position for the Cowboy. Dolan hangs on and gets out, but the score ties at 4-4 and rides out the second. Delande gets choice for the third period and elects to stay on top. Dolan needs to get out before the riding time gets over a minute by Delande. Dolan unable to get out.

Re-start on a potentially dangerous call. Dolan gets the reversal on the restart! Dolan needs to ride out Delande. Weird spot with 18 seconds left. Dolan hangs on for the win in a great match! 6-5 decision.

Edinboro not mathematically eliminated. Looking for some senior leadership from Boyd here to lock up the dual victory. Quick takedown on the start for Boyd. Boyd gets a locking hand penalty and then Geer escapes to tie it up. Boyd gets a deep single leg, but Geer drives through to get the takedown. Boyd gets out before the first ends. 3-4 deficit for Boyd going into the second.

Boyd chooses down position to start. Boyd gets out immediately with a reversal to take the lead. Geer gets out on a restart and then gets his ankle to finish the takedown after a scramble. Boyd escapes on a restart. Boyd gets a takedown on the edge much sooner than it was called by the refs. 8-7 lead for Boyd going into the third.

Geer gets choice and selects to start the third on bottom. Geer gets out quickly. Geer gets Boyd’s ankle again and Boyd tries to fight it off by keeping his leg out to the side. Graciously gets the stalemate and restart. Boyd takes a shot and gets a low single leg. Needs to finish. Geer’s legs seem to be made of rubber bands. Boyd sticks with it and needs to his leg behind. He does! Picks up the win 10-8. Great match.

Preston Weigel sitting out again. Will be his second missed match since losing to No. 1 J’Den Cox of Mizzou last week. Scoreless first period. White chooses to start on bottom. Quickly escapes to take the lead. Pretty boring match.

White has a significant size advantage on Reynolds. White wrestling like he has no offense, which is not typically the case. 1-0 advantage for White going into the third. Reynolds starts in the neutral position. Wants nothing to do with trying to escape White. Reynolds starts to get agressive with 30 seconds left, but it’s too little too late. White picks up the win 1-0 to clinch the dual.