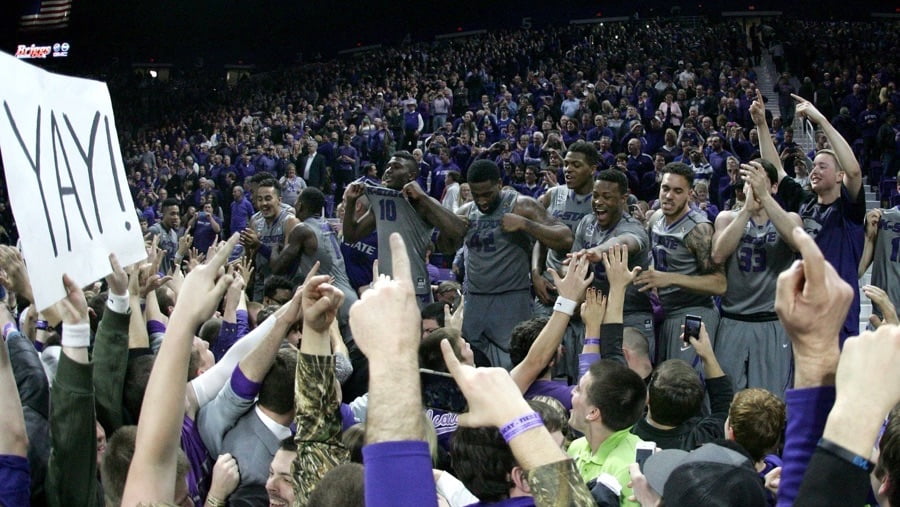 Kansas State fans should know how it feels. (USATSI)

Earlier this week, Big 12 Commissioner Bob Bowlsby and Assistant Commissioner John Underwood held a press conference to announce a new rule that the NCAA will pilot during the Big 12 tournament.

“We’re very excited for this opportunity,” said Underwood, “to show the nation that the Big 12 is the leader in basketball innovation. We’re the top conference in the country, and we’d like to do everything to stay that way.”

Underwood explained that the new rule would allow for great player/fan interaction and give each game a greater sense of community.

During timeouts or other significant breaks when awards or special entertainment is occurring, players and coaches currently involved in the game on the court are allowed to “rush the stands” to celebrate the moment with the fans.

“We want out players to be there for the fans of our conference,” said Bowlsby. “Whenever a fan catches a Chick-Fil-A T-shirt shot from a PVC cannon or gets caught in an awkward moment on the kiss cam, we want our players to be there, having that moment with them.”

Bowlsby clarified that the conference was in no way advocating players kissing fans during the game.

“But if it happens between two consenting adults,” said Bowlsby winking several times, “who are we to judge.”

Underwood said while he has worked to spearhead the idea to the NCAA, the original concept came from Bowlsby.

But it wasn’t until late February when he watched the end of the Kansas State upset victory over Kansas that he realized the possibility of rushing the stands.

“Kansas State fans had so much enthusiasm and energy when they ran on the court,” said Underwood. “We really wanted to help the fans experience that from the other end.”

Underwood said that the conference has already quietly tested the new rule during some of the final conference games.

“I won’t discuss each game where we tested the new rule, but the Oklahoma State at West Virginia game was especially successful,” said Underwood. “We’ve even asked a few fans from West Virginia [Underwood gestures and three people step up on stage] to talk about their experiences.”

The first fan, Frank Morrow, said it was okay.

“I mean, I appreciate the OSU bench joining me when I got my nachos,” said Morrow, “but I dunno, I guess I just wanted to have the moment to myself. Besides, that Budke guy ate most of them.”

Another fan, Jessica Thomson, said while she appreciated the player’s excitement, it felt a little out of place.

“An OSU fan had just spilled my drink, accidentally, I think, and these guys came from both sides of the row and crowded around me chanting, ‘What time is it?!’” said Thomson. “They were bumping everyone, and I just didn’t know if that was really the appropriate time for that sort of thing.”

The third fan, who only introduced himself as Couch-Burning Todd, said the players made it very difficult for him to slip out quietly to use the restroom.

“They were hugging me, laughing, and asking if I knew what time it was,” said Todd. “It was pretty darn inconvenient.”

Underwood said that those are the sort of memorable experiences the Big 12 and the NCAA want to see continue into the future.

“Those are the moments you treasure, that you really appreciate,” said Underwood, “which is why we hope the new rule gets good traction in our tournament so that the NCAA will try it out during the Tournament. I can’t think of anything better than our players going into the stands and the fans coming down on the court to interact with our players. Times like those are just pure magic.”