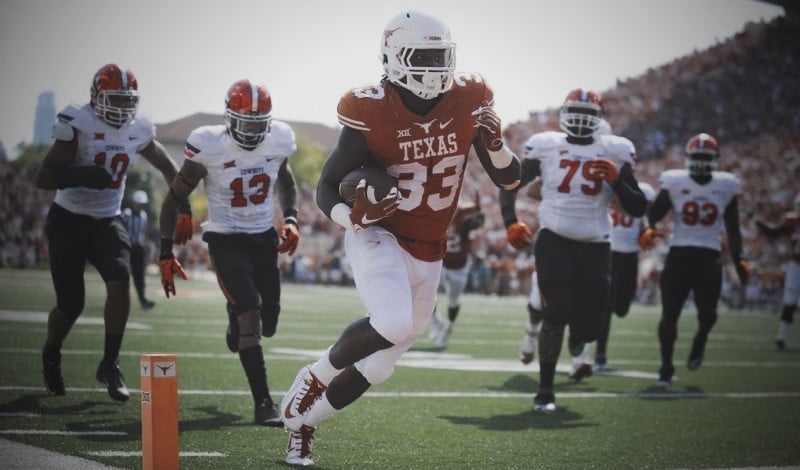 “Well, that sure was something,” said Big 12 official Alan Eck after OSU beat Texas 30-27 in Austin. “Not quite how we rigged it, but hey, it worked out.”

Eck led the officiating crew for a game that was, at times, difficult to watch.

However, no matter how messy the game got, Texas couldn’t catch a break.

The game seemed so one-sided that some fans and analysts have even claimed the game was fixed by Eck and his crew, citing the unusual call of defensive holding on a run play and a fairly non-violent roughing the passer call that negated an interception, among others.

“Oh, yeah, we were definitely paid off,” said Eck playing with diamond encrusted Rolexes sported on each wrist. “The problem was we never really got a chance to fix the game. Texas just kept doing our job for us.”

Eck adjusted his platinum sunglasses and explained that when the check cleared, he and his team had met and created a detailed and intricate plan to weight the game against Texas.

“You know, just a few small calls here and there that would put the ‘Horns in a bad space to make them frustrated. Then lightly overreacting to interference on passing plays, minor personal fouls that we would normally overlook, you know stuff we could blame on protecting player safety. But man, that all went out the window after the first quarter. It was like watching drunk babies fight.”

Eck said that it was difficult to follow the plan when OSU changed their play calling and oil-baron-booster rich Texas couldn’t maintain their facilities well enough to keep the OSU headsets working.

“I mean, geez, it’s hard to call PI [passing interference] on the UT defense when you keep running it up the middle,” Eck said about the OSU offense. “I sidled up to Yurcich [OSU offensive coordinator] and asked him what he was doing? I mean, they paid for this and weren’t even going to use it? Just weird.”

Kelly Deterding, the line judge on Eck’s crew, said that Texas also refused to cooperate by handing the refs’ easy penalties throughout the game. He said the unsportsmanlike conduct call on Strong was clearly a no-brainer.

“I mean, I walked up to Strong after the defensive holding penalty,” said Deterding, removing his golden headphones and setting them on the table, “trying to figure out how we were going to get OSU in field goal range and then he starts saying this stuff about my mom and T. Boone Pickens and dumpsters and stuff. I wish I had recorded it. The man has a gift.”

When asked how much of the game they had actually fixed, Eck sighed.

“None, really,” said Eck, mopping his brow with a silk handkerchief. “We’re professionals and everything, but even we have off games. Sometimes a team is so bad and undisciplined that it’s like getting punched in the mouth and we miss opportunities to swing the game one way or the other. We’ve got to get better as a group in responding to that sort of adversity. Fortunately we came out with the win, but we’ve still got a lot of work to do.”

As he walked to his Rolls Royce, Eck noted that he would definitely fix games against Texas again despite the poor experience.

“We’re genuinely not that biased,” said Eck, “but when Texas continued to cut back on our weekly allowance, it strained the relationship. We formally cut ties with the Texas athletic department late last year and have been fielding offers for fulltime bias. We haven’t made any decisions yet, but tell Art [Briles] that I did get his messages and that he doesn’t have to keep calling. We’ll get back to him when we get back to him.”