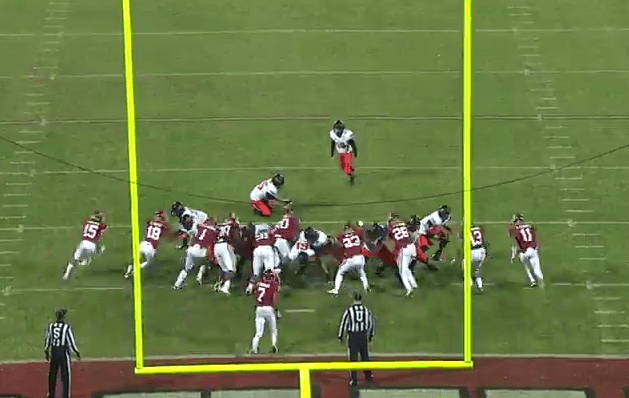 On a misty morning in Stillwater, an unlikely pair was seen walking the practice fields outside Boone Pickens Stadium. Even though they were mortal enemies a few short days ago, OSU kicker Ben Grogan and OU kicker Michael Hunnicutt decided to have a joint, intercollegiate practice today.

Grogan explained that the unusual practice came at the request of Hunnicutt following OU’s defeat in Bedlam.

“After the game, we were celebrating the win,” said Grogan, repeatedly bouncing a football off toe his left foot, “and Mike [Hunnicutt] made a bee-line to me and said, ‘Why is everyone mad at me?’”

Grogan said after a confusing ten-minute conversation, it became clear that not only did Hunnicutt not know what had gone wrong, but he wasn’t even sure what a kicker did.

“I’ve been basically faking it for 4 years,” said Hunnicutt, ball tucked under his arm. “They would send me out on the field and our holder would yell, ‘Kick the [expletive deleted] ball,’ so I did. I didn’t really even know where the ball needed to be kicked to.”

Hunnicutt said that he was fine with this for the first 3 years, but has recently questioned how long he could sustain the charade.

“I mean, during practice I just sort of make it up as I go,” said Hunnicutt. “I tried doing a bunch of different stuff to figure out if that was what I supposed to be doing, but coach Boulware just said things like, ‘Good read on the D,’ and ‘Nice fake,’ so I could never really figure it out.”

Hunnicutt explained that when he saw Grogan kick the ball and everyone on the OSU sideline cheer, he’d had enough.

“I needed to know,” said Hunnicutt. “So why not go straight to the expert.”

Grogan said he and Hunnicutt had been trading emails and texts leading up to the practice and that Grogan even introduced Hunnicutt to West Virginia coach Dana Holgorsen, who recently discovered kicking himself.

“I tried to start him off with the basics,” said Grogan, “like you stand so many steps away and try to get the ball to fly in this sort of way, but there still seemed to be something he wasn’t getting. That’s when I set up a 3-way Skype call with Dana.”

Grogan admitted that while he couldn’t see what Hunnicutt wasn’t understanding, Holgorsen knew immediately what the problem was and flew out to Norman to meet Hunnicutt and talk to him one on one.

“We walked out onto the field, just the two of us,” said Hunnicutt, tears welling up, “and Dana pointed to the… uprights? and he said, ‘You set those two sticks? The ball goes between them.’ It was like I’d never seen color before. I think I ran a lap around the field. I don’t even really remember. It was such an amazing feeling.”

After that, Hunnicutt said everything began to fall into place for him.

“I could see what I’d been missing all these years, what I’d been doing wrong,” said Hunnicutt. “Like last year, I caught the ball and ran it during a game. I never should have done that. That should never have happened.”

Grogan said Hunnicutt is coming along nicely, though he still has a long way to go.

“Yeah, I still have to talk him through the process a lot,” said Grogan. “He still lines up to kick it the wrong way a lot, but he doesn’t grab the ball and kneel anymore, so we’re making a lot of progress.”

Hunnicutt said he’s grateful for everything Grogan has done.

“Without him, I don’t know where I’d be,” said Hunnicutt. “Probably just replaying clips of Dan Bailey over and over and wondering what the heck it all means.”