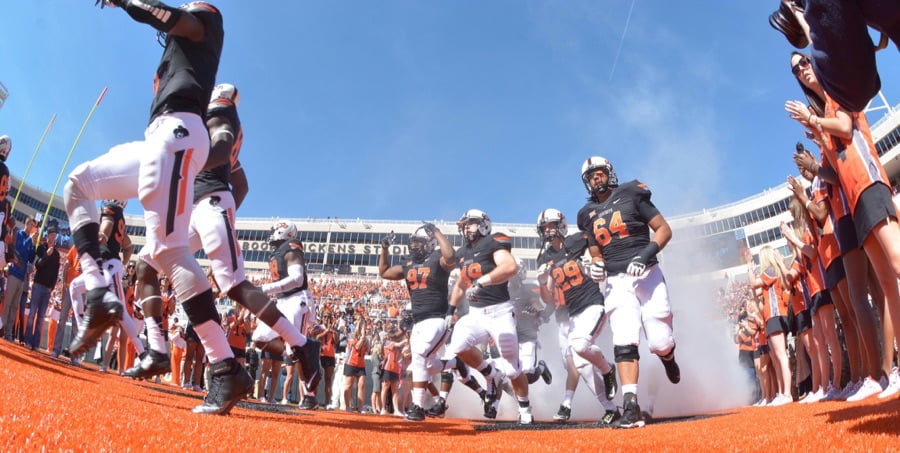 OSU takes the field (or does it?) (USATSI)

The football offseason is in full swing at Oklahoma State, and that means recruiting updates, spring practices, and above all, the spring game.

Last year, Oklahoma State Athletic Director Mike Holder and Head Coach Mike Gundy decided to innovate on the old and tired tradition of the spring game and held an open practice instead for fans.

The huge success of this practice, called the “Orange Blitz,” has led Holder and Gundy to announce a new and exciting update to the format: digital simulation.

Holder and Gundy met with the media early Wednesday to discuss the new format.

“We’re really excited to continue innovation here at Oklahoma State,” said Holder. “We’re always looking for new ways to give fans access to the team and to showcase how well we develop players in our program. Which is why we decided to simulate the entire spring game using the NCAA Football 14 video game.”

Holder said that in the era of digital media he wanted to meet fans where they are.

“You, a normal fan, let’s call him ‘Bob,’ might not want to sit out for a few hours and watch our guys show off their talent, strength and speed,” said Holder. “Bob might want to just sit and play Angry Birds on his phone. Well, we need to find a way to get Bob involved and this was the most obvious way.”

Holder said creating all the appropriate player profiles with accurate, up-to-date stats was difficult, and took 4 graduate assistants 3 months to complete, but will be worth it when they can showcase the final product to the fans.

“It’s [NCAA Football 14] a really sophisticated system EA built all those years ago,” said Holder, “and we think the realistic physics and lifelike movement of the players will give the fans the sensation of watching a real game being played on the jumbotron.”

When asked about whether a person would be playing the game or if the computer would play itself, Gundy said he wouldn’t discuss personnel decisions.

Gundy did say that his biggest reason for using the game, aside from its high-production value, was keeping the players healthy.

“We’re really focused on minimizing contact and injury, so this seemed like the best option,” said Gundy. “Plus it will allow the players to actually sit and visit with the fans while watching the game, something they’ve never gotten to do before. Now number 10 can be sitting next to little Jimmy or Jenny, since girls can like football, right?, and can say, ‘Hey, look at that pass I just made! Isn’t that neat?’”

Holder said there are other events planned for that day, like a free ride on Bullet for kids 10 and under, pictures with Pistol Pete and the cheer squad, and a T. Boone Pickens autograph session.

“We’ve got high hopes for this year and hope that dozens of fans turn out,” said Holder. “It’s going to be a great reunion for the Cowboy family.”