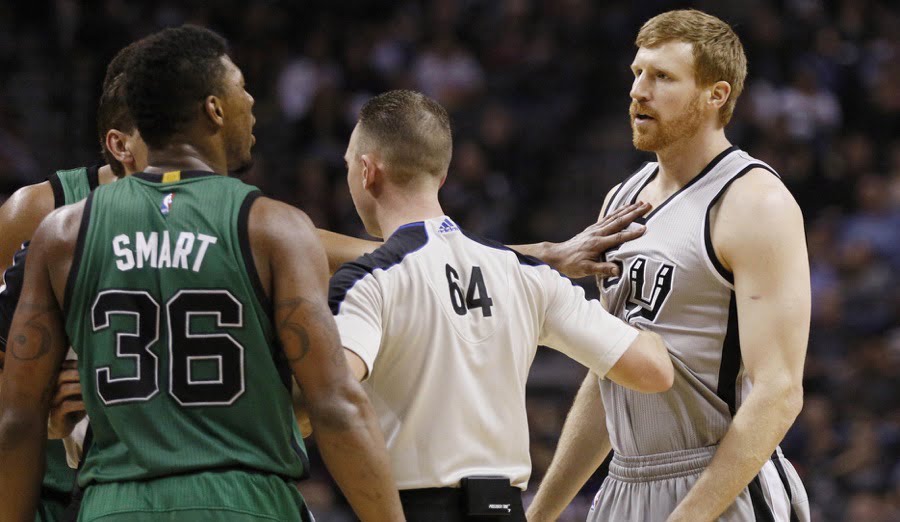 Marcus Smart is no stranger to controversy.

During his college career at Oklahoma State, he stumbled into the stands following a play and shoved a fan. Smart claimed the fan called him the “n word,” but he was still suspended for 3 games for the shove.

Recently, Smart found himself back in hot water.

In a game on March 20th between the Boston Celtics and the San Antonio Spurs, Smart hit Spurs center Matt Bonner in the genitals.

Smart claimed the low blow was an accident, a result of his arm being caught while fighting through a screen, but accepted the 1-game suspension as justified based on the film.

“You know sometimes things just don’t look how they really happened,” said Smart. “But I can’t help that. I know what I did and what I meant and that’s what’s important. Like, right after the game [with the Spurs], I didn’t mean to bust up Matt’s [Bonner] car. It just looked like that.”

Smart said the automotive accident happened sometime before Bonner got home and was genuinely an honest mistake.

“I was just walking down the street carrying a sledgehammer, like anyone would be,” said Smart, “and I was apparently right next to his car when I tripped over some uneven sidewalk, and then bam: I had busted out all his windows and his headlights. Really, could have happened to anyone.”

Smart explained that in the process of checking to make sure that the sledge was properly weighted and balanced, his momentum shifted and got him spinning in a semicircle, leading to the contact with the glass.

“And when I was checking to see how bad the accident had been,” said Smart, “I lost my balance and slashed his tires and carved, ‘Celtics Rule!’ in his hood. Just really unfortunate.”

Smart said that he really feels bad for how the incident turned out and understands if Bonner has a tough time accepting that trashing the car was an accident.

“If I were in his shoes,” said Smart, “I would have a tough time accepting that someone could accidentally write ‘Your Mom’ in tar on the side of my car right before throwing a Molotov cocktail into the backseat, but that’s life. You just have to be yourself and, you know, know who you really are. I’m not the sort of person to say he’s as ugly as a rusted out bus, but I can see why people might think I am.”

Smart said he’s truly sorry and is perfectly willing to replace Bonner’s car, regardless of whether or not the accident was his fault, as long as the car is “as stupid as Bonner’s face.”