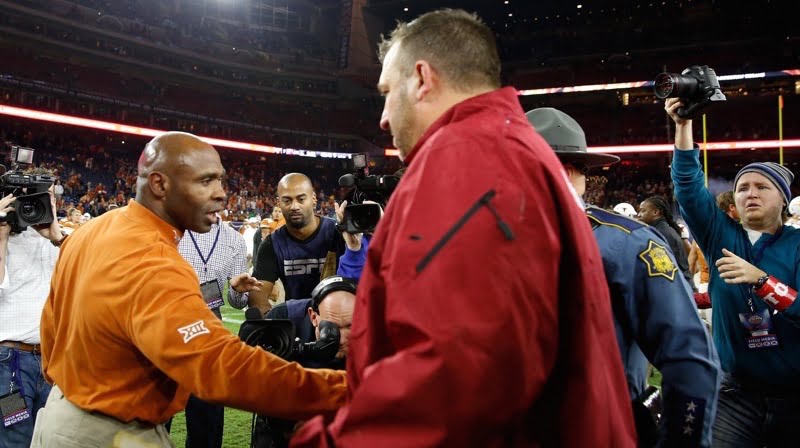 Monday, December 29th was a rough day for Big 12 football. In one day, West Virginia, Oklahoma, and Texas all fell to their bowl opponents. West Virginia lost in what proved to be a literal slugfest with former Big 12 member Texas A&M, while Texas and Oklahoma each fell in blowout losses.

Oklahoma lost 40-6 to a robust Clemson defense, turning the ball over 5 times. However, Texas’s 31-7 drubbing from Arkansas was even more lopsided, despite the smaller point margin.

At least, that’s was how it appeared.

According to Texas head coach Charlie Strong, Texas not only held the moral victory, but the actual one.

“We’re really proud of how our guys competed,” said Strong following the game. “They came out like a proud and majestic dumpster fire, and man, they took it to them. It wasn’t even close!”

Strong went on to say that he was particularly proud of how well the offensive line played, despite allowing 3 sacks for negative 37 yards and helping the offense net 2 yards rushing for the entire game.

“Joe [Wickline]’s boys were like a brick wall,” said Strong. “I’m glad we have him on staff. He’s been a huge asset to the program. He’s just such a calm and quiet leader. He helps us all relax and remain calm, cracking jokes about us being ‘trash’ and ‘worthless.’ Haha, I love it!”

When asked about his opinion of the bowl game performance, Wickline said, “Who said anything about calling plays? I don’t even know what those words mean.” He answered each question after that by mumbling “Don’t know nothing” under his breath over and over.

Coach Strong also noted how well the offense was able to put points on the board.

Someone noted that UT had 59 yards not points.

“How is that different from what I said?” said Strong, looking puzzled.

Someone else explained the difference between yards and points. Strong and this reporter continued in a lengthy dialogue that ended in Strong asking for the reporter to define the “foot” unit of measurement and the reporter sitting down on the street and asking “What am I doing with my life?”

Strong continued by saying that he’s optimistic for the future after having such a strong first season.

“Strong season,” said Strong. “Ha! Anyone have some paper I can use to write something down with?”

When asked whether he believes he can fulfill his promise to never have another 5 loss season, Strong noted that he had already accomplished this.

“We’ve already done better than 5 losses,” said Strong. “And we intend to do just as well or better in the future. Things are looking up for Texas football. Gig ‘em, Horns!”