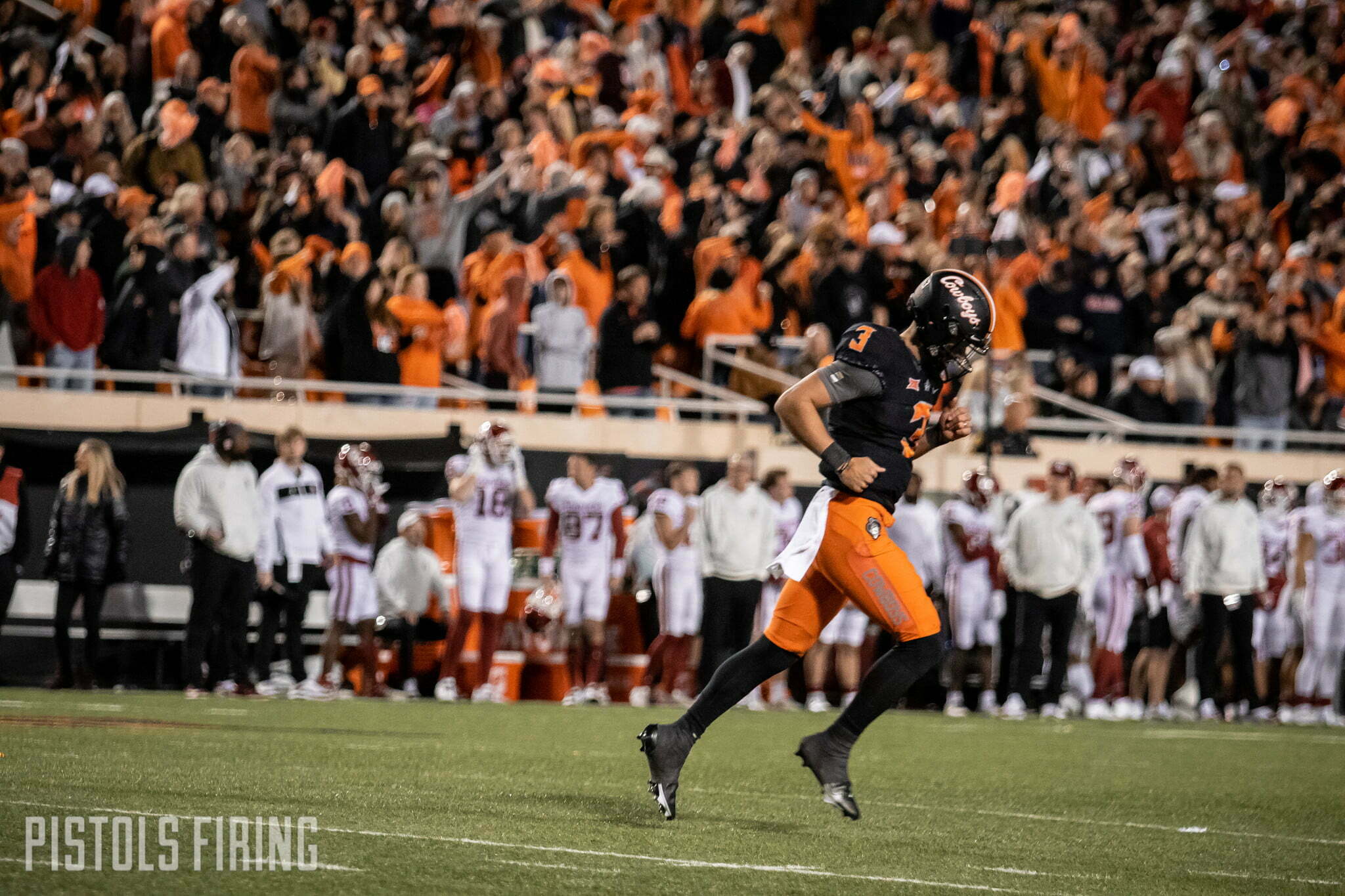 On Monday, I broke down my Preseason Big 12 poll in great detail. Now it’s time to explain my selections for the conference’s preseason team.

Rather than going player-by-player (because that would take forever), I thought I’d just give you the names out front, and do a thoughts post around it. Alas, here it is:

1. Sanders Seems Like the Clear Preseason Choice at QB

As I said to start my explanation for why I ranked OSU atop by preseason poll, Spencer Sanders is one of few returning quarterbacks in 2022.

It looks as if starters at Baylor, Oklahoma, Kansas State, Texas, West Virginia and Iowa State will all be different than their intended starter from last season. Sure, when the game is actually played, Blake Shapen or Dillon Gabriel or even Adrian Martinez have a chance to usurp Sanders from preseason projections, but I just had a tough time basing something off potential when Sanders’ numbers are more proven.

Sanders threw for 2,839 yards and 20 touchdowns last season while running for another 668 yards and six scores.

Shapen played great in the Big 12 title game, but he had limited work on the year sitting behind Gerry Bohanon. Shapen threw for 596 yards and five scores on a smaller sample size.

Gabriel steps into a great spot, but there will be questions as to how he adjusts to the new level of competition after transferring up from the Group of Five level — 8,037 yards and 70 touchdowns in three seasons makes me think he’ll be just fine no matter where he is playing. But again, naming a newcomer to the preseason team doesn’t feel right when a returning guy from a 12-2 team a year ago is in place.

2. The Conference’s Pass Rush Is Scary

I ran out of defensive line spots quickly.

In my opinion, Collin Oliver (Oklahoma State), Felix Anudike-Uzomah (Kansas State), Will McDonald (Iowa State) and Siaki Ika (Baylor) are must-haves on everyone’s ballot. That leaves a handful of guys competing for the final spot, a spot I gave to OSU’s Brock Martin.

Oliver, Anudike-Uzomah and McDonald were the Big 12’s Top 3 in sacks last season (combining for 33) and all return. Martin was fifth last season with nine, including 6.5 in his final six games of the season.

With all the Cowboys have returning on the defensive front, quarterbacks will likely see a lot of Boone Pickens Stadium turf, but the league as a whole could see a ton of sacks in 2022.

It was tough picking defensive linemen, but at least I had five slots. Only three receivers? In the Big 12? In 2022?

I went with Xavier Worthy (Texas), Xavier Hutchinson (Iowa State) and Marvin Mims (Oklahoma). The two Xaviers are the leading returners in receiving yards with 2,086 between them. Mims led the league in yards per reception that season with 22.

My next two out were Brennan Presley (Oklahoma State) and Quentin Johnston (TCU). The receivers getting only three slots shafted Malik Knowles (Kansas State) out of my kick returner slot. Had I had another spot to throw in Presley, I would’ve put Knowles at returner.

I picked Texas to finish fifth in the Big 12, yet I had five Texas players make my preseason team — a bit of a headscratcher, I’ll admit.

Here is the team-by-team breakdown:

Now, why so many Longhorns?

It really came down to a lack of returning production at linebacker and tight end elsewhere in the conference.

None of the linebackers from the end-of-season All-Big 12 squads are returning. Texas’ defense had some questionable moments last season, but I felt more comfortable giving the preseason nod to DeMarvion Overshown, who had 83 tackles last season, and Luke Brockermeyer, who had three interceptions as a linebacker, than I did basing things off of potential. I’m high on Mason Cobb’s abilities, for example, but putting his eight total tackles from last season against the stats of Overshown and Brockermeyer seemed silly.

Tight end was one of the only spots I put a newcomer, again, because of a lack of returning production. Jahleel Billingsley transferred to Austin from Alabama. While with the Crimson Tide, Billingsley had 543 yards and six touchdowns in the past two seasons. Without a clear cut choice like Charlie Kolar, I had to go searching.

So, if there was more returning production in those spots, Texas would’ve ended up with two guys: Bijan Robinson and Xavier Worthy.

5. Running Back Will Likely Be Locked Up

With only two running back slots, it’s going tough for anyone to usurp Robinson and Deuce Vaughn (Kansas State) in the preseason.

Vaughn finished last season with 1,404 rushing yards, and Robinson had 1,264. The next closest returner was Kansas’ Devin Neal with 707 yards.

As good as Vaughn and Robinson should be in 2022, that makes things fun to see where those rushing yards on other teams get distributed. Who is going to fill in at Baylor, a team that had the league’s leading rusher (Abram Smith)? What does the post-Breece Hall era look like at Iowa State? How will Dominic Richardson fill the shoes of Jaylen Warren? Carries are there for the taking in 2022.