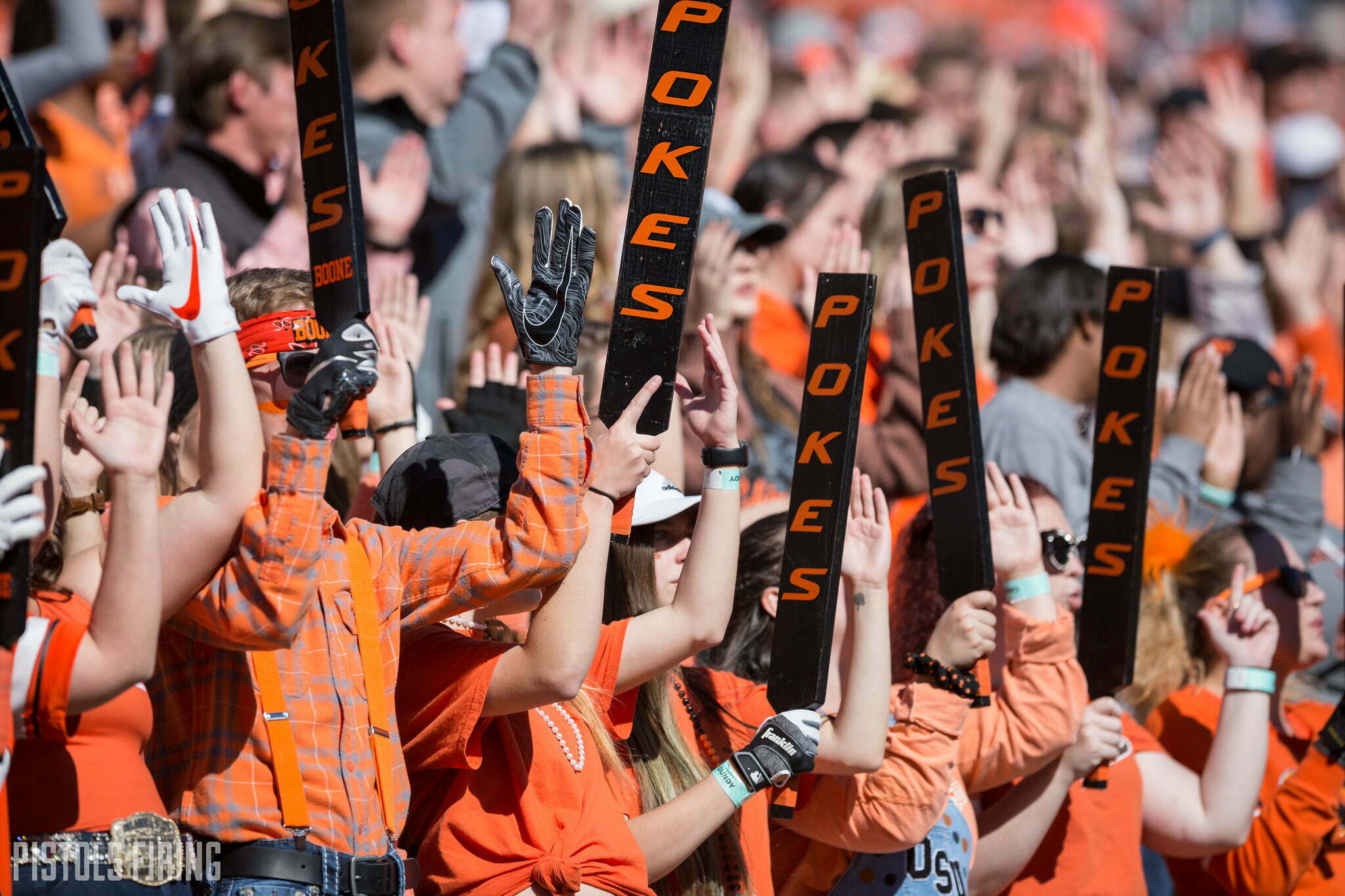 I think more than I should about things outside of Cover 2, offensive efficiency and how many yards Chuba Hubbard needs to surpass 5K and steal Thurman Thomas’ all-time OSU rushing record.

Those things I often think about are things like revenue generation, television contracts and balancing athletic department budgets. Maybe it’s because I enjoy thinking about them as they relate to my own life and my own business, but I also think they’re such a big part of college sports (namely college football) that we rarely consider.

My latest mental rabbit hole was two-fold. I started thinking about the SEC-Big 12 and Big Ten-Big 12 revenue gaps while writing this piece on Monday. And that led to thinking about this series of tweets from Bill Haisten (Tulsa World) and Adam Lunt (Tape Doesn’t Lie … and sometimes PFB).

Here they are in order. 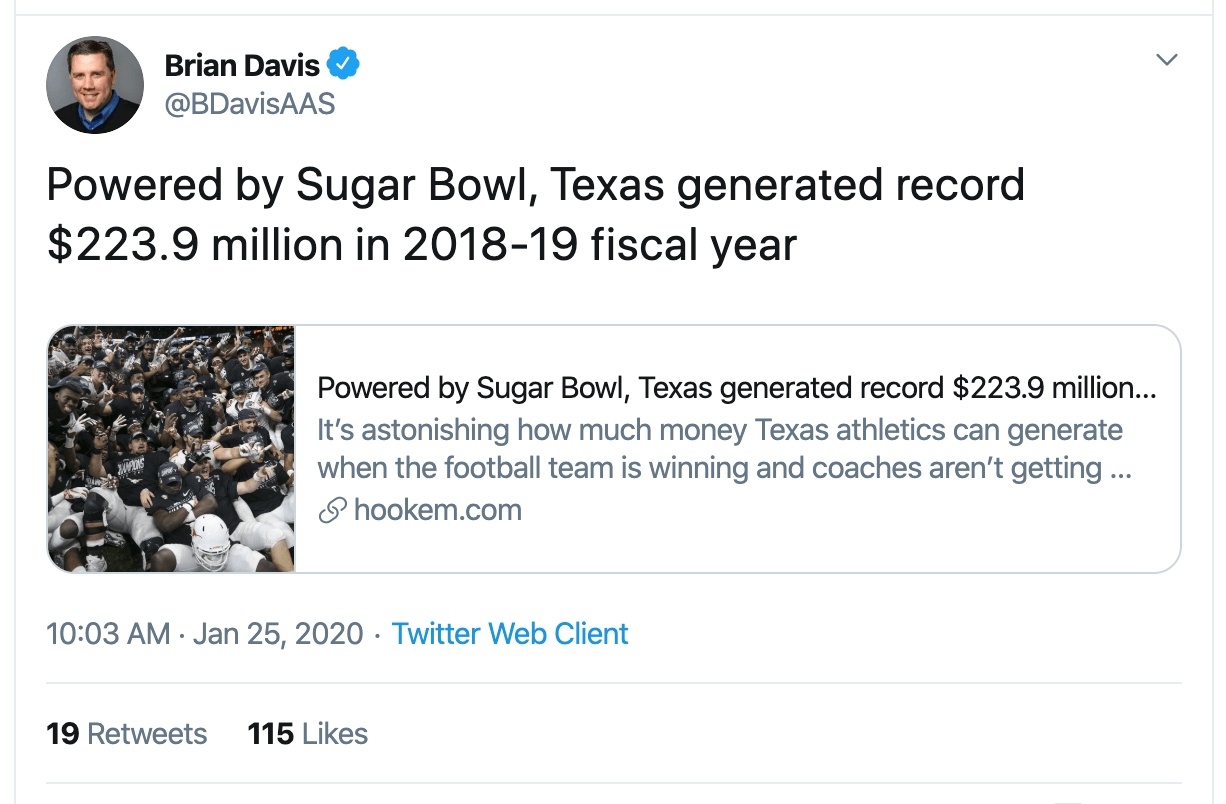 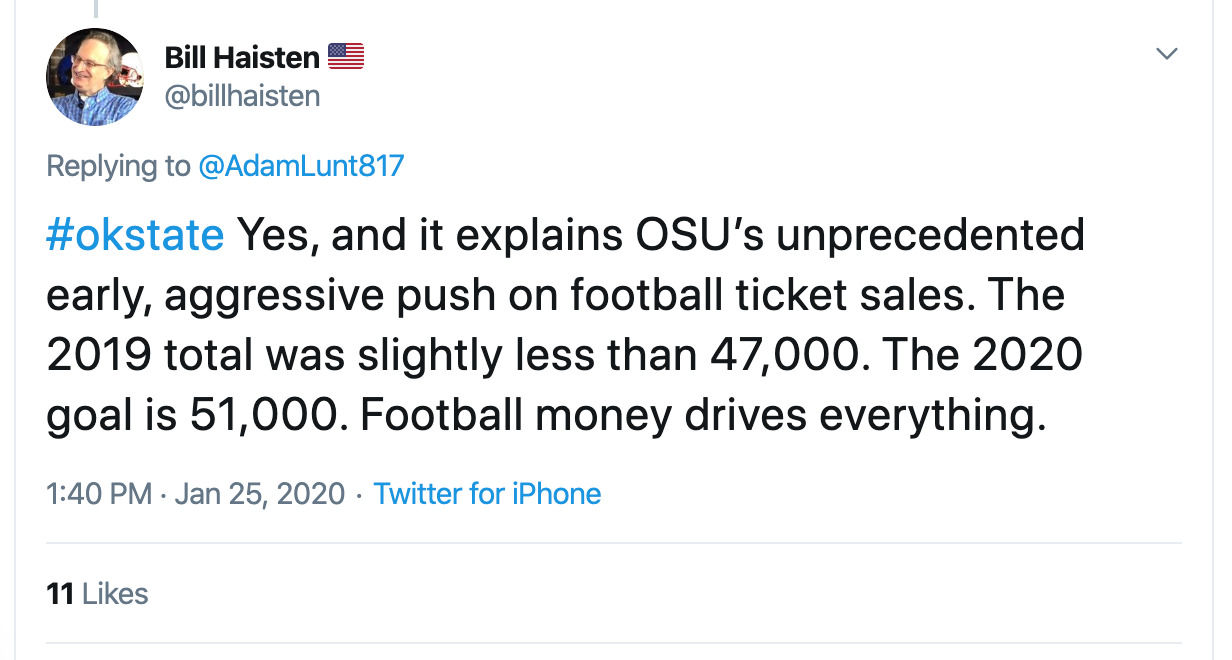 Some facts and thoughts on these.

• Oklahoma State’s 2018 revenue was $88 million. Its 2019 revenue (publicly available right here) was $95 million. It is consistently playing in the $85-$100 million range. Again, this is less than half the number Texas is consistently swimming in.

• The last number we have on OU is from 2018, when its athletic department generated $175 million. Kansas and WVU were also well ahead of OSU in 2018, while Iowa State, Texas Tech and Kansas State were all in OSU’s general vicinity.

• The remarkable thing about all of this is that Oklahoma State was unquestionably the No. 2 football team in the Big 12 for the last decade, despite being near the bottom in resources.

• Related: We might be viewing Mike Gundy through the wrong prism. What if the right way to view him is not as somebody who’s not capitalizing on his success but rather as somebody who is outkicking his coverage when it comes to the buttons he can and cannot press.

• All of this represents the insanity of CFB, where teams are vying for the same thing — conference titles and CFP berths — with wildly different budgets and ability to allocate resources. Maybe we want CFB to be, uh, an unadulterated form of capitalism (which is what this represents), but if so then maybe we need to have a bigger conversation about, you know, paying players.

• You think Texas is only sort of mad or raging with white-hot anger over the fact that their budget more than doubles Oklahoma State’s, and they came up 22 wins shy of the Pokes in football in the 2010s (93-71)?

• The quickest path to increasing its budget to nine figures and topping the $100 million mark (at least in the short-term) is by selling more football tickets, as Bill Haisten outlined here. This is why OSU has been pressing since Chuba and Tylan returned. You can’t control all of your revenue generation (conference payouts for example), but you can definitely control that.

The Cowboy football program has had a tremendously positive January, and the university wants to capitalize with what should be the most aggressive and orchestrated ticket campaign in school history.

OSU athletic director Mike Holder has said it a thousand times: Football revenue is the engine that drives the entire athletic department. The magic number: 51,000. That’s the goal – to sell at least 51,000 season tickets and break the 2017 record of 50,732. [Tulsa World]

I believe these have been categorized differently over the years — for example, in the 2015 season, “contributions” was a line item that totaled just $5 million, while in the 2018 season it was $9.5 million — but the point here is that 10-20 percent of your budget for a fiscal year can be affected by who does or doesn’t buy tickets.

• There are so many implications here, it’s impossible to think of or list them all. OSU has been doing more with less for forever in ways we don’t think about or appreciate. And while I’m first in line when hollering about the specific ways in which they can and should be doing better, stuff like this is important to remember when we talk about the state of Mike Gundy and his football program.