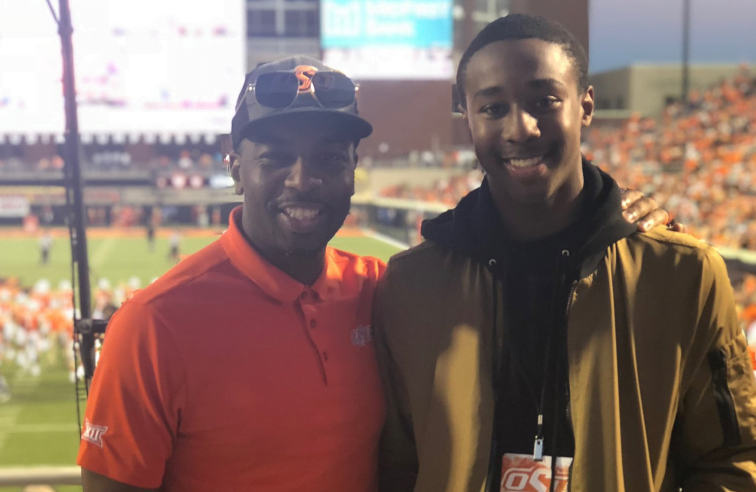 Mike Boynton and his coaching staff have already struck once in the 2020 recruiting cycle, landing a commitment in early December from four-star point guard prospect Davonte Davis. His commitment is the first of what could be several in the 2020 class, considering Lindy Waters, Cam McGriff, Thomas Dziagwa and Curtis Jones will be on their way out as the 2020 class is coming in.

So the odds OSU takes a big class — both in terms of total size and, well, literally — is pretty high. As we look ahead with 2019 in the rearview and signed, here’s who you need to know.

Todd is both literally and figuratively the top target OSU has a realistic shot at landing. He’s a 6-10, 195-pound power forward from Trinity Academy in Raleigh, North Carolina, ranked in the 247Sports composite as the No. 13 overall prospect in 2020. He has a ton of upside given his size, mobility and handle. There’s a good chance he’s one-and-done good. His unique skillset is going to have NBA scouts aghast with his potential.

Todd is the early front-runner for the No. 1 player in the class of 2020 as a 6’10 face-up big man with impressive agility. He’s a confident three-point shooter and showed some grab-and-go ability off rebounds. He seems to fit the new-age center profile even better than James Wiseman [the No. 1 player in 2019] because he has some more versatility to his game. [SB Nation]

Oklahoma State has done a good job prioritizing Todd early and often. It seems more likely than not he stays closer to home with one of UNC, NC State, Kentucky or even Duke if it came calling, but OSU is punching above its weight admirably here. Todd visited OSU this summer and the coaches have been out to see him several times.

Mike Boynton has made clear that in-state prospects who have the talent and abilities to give OSU a shot to win the Big 12 are a top priority. He’s held true to that, too, landing top in-state talents Keylan and Kalib Boone in 2019. But there’s a strong belief among some that Bryce Thompson, a two-way guard from Booker T., is the strongest prospect of them all. Thompson is a 6-2, 170-pound guard, and OSU is recruiting him to play either guard position.

Boynton has personally taken on the load of recruiting Thompson, he’s said on numerous occasions, and the vibe between the two — along with Boynton’s relationship with his father, Rod — is giving the Pokes a legit shot to steal him away from other programs.

“He’s very personable and makes things feel very personal with you,” Thompson told Rivals of Boynton recently. “He’s a player’s coach. He gets out there with his players on the floor and he’s talking. I really like him a lot.”

Rondel Walker is a three-star guard (rated by some as a four-star) whom OSU offered early on in Boynton’s tenure. Like Thompson, he’s also an in-state kid — he stars for Putnam City West — and has a rising recruiting star still.

Walker has offers from OSU, Rutgers, Texas A&M and Utah at the moment, but his 6-2, 160-pound frame and handles will earn him more. He’s also visited OSU on an unofficial basis several times.

Oklahoma State isn’t always in on big dogs — oh wait, I guess they actually are with Boynton — but in any case, Cunningham is a unique example. He’s a top-10 talent ranked as the No. 7 player in 2020. But the fact that OSU offered him first gives OSU a real dog in the fight.

“Oklahoma State was my first offer. Mike Boyton was the assistant coach when they offered,” Cunningham told Rivals.com. “I didn’t know what to say when they offered. I was at a loss for words. It is just crazy. I didn’t think I was going to be here.”

“I love the coaching staff and how they run their program,” Cunningham continued. “It is a really good program.”

Cunningham attends Montverde Academy and has LSU, Kansas and Texas A&M offers, and Kentucky is hot on his heels, but OSU is at least in the mix for the 6-5, 185-pound slasher.

Coleman made an official visit back in October for homecoming and hoops along with a lengthy list of notable visitors, among them Walker, Thompson, Davis and 2019 commits Keylan and Kalib Boone.

Coleman is a 6-6, 190-pound small forward like Cunningham, but with more of a national profile despite being ranked lower in the recruiting world. He has offers from Georgetown, LSU, Maryland, Kansas — you name it — but like Cunningham, OSU was in early and is squarely in the hunt.

Coleman has also made unofficials to Virginia, NC State, Virginia Tech and Maryland, and will likely have a slew of visits on deck this spring before potentially weighing his options.

Bradford visited OSU on an unofficial basis this summer and subsequently was offered by the OSU staff. A Saint Louis native, he has ties with Oklahoma Run PWP — the Under Armour team of Oklahoma, which has produced Keylan and Kalib Boone and many other OSU targets — and has interest in OSU. Bradford has ties to Arizona, as well, previously playing for Hillcrest Hoops in Phoenix. The connection to OSU is real, though, and could play a factor in where he ultimately lands.

Before uprooting himself to Bella Vista Prep in Scottsdale this summer, Holman was a homegrown prospect from Norman who grew himself via the Oklahoma Run PWP team. He broke out as a star this summer, garnering offers from OSU, OU, Houston, Tulsa and Ole Miss. Even several states away, OSU has a shot because of his ties to the state and the player-friendly system it runs. He’s a top-60 prospect.