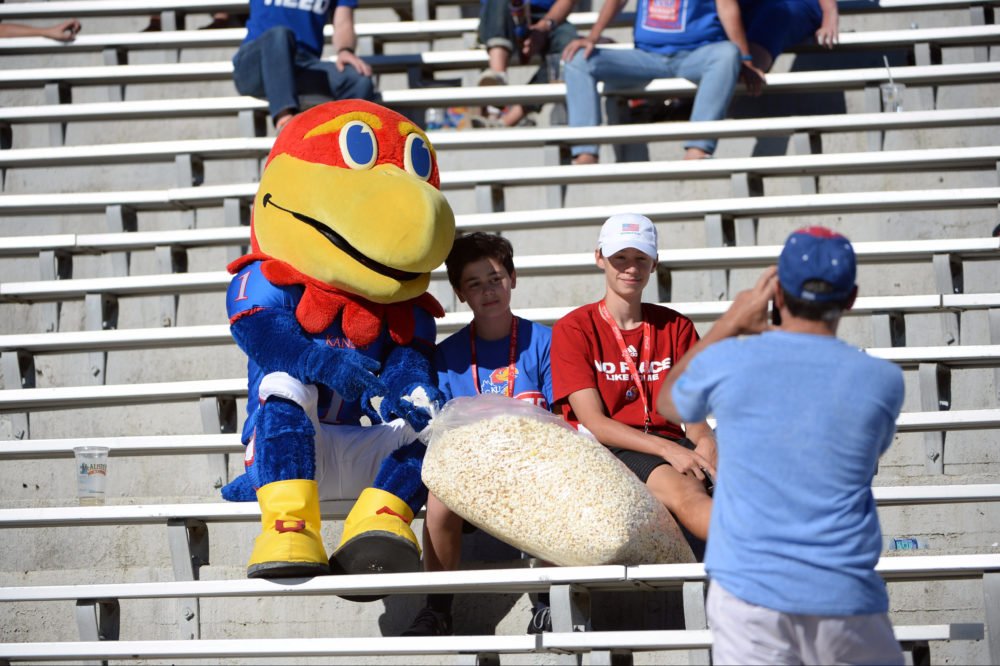 It’s Senior Day in Stillwater this Saturday, as players like Mason Rudolph and James Washington say goodbye to Boone Pickens Stadium. Standing in the way of another 10-win season are the Jayhawks of Kansas.

Joining me this week to break down OSU’s 1-10 opponent is Andy Mitts, editor of the Kansas SBNation site Rock Chalk Talk.

We talk about the unmet expectations for Kansas and why they’re head coach David Beaty’s fault, who has had a good season for the Jayhawks, KU’s quarterbacks, and more.

If you’re interested, the full audio interview is available to listen to at the bottom of this post.

Phillip Slavin: Tell me how fans feel about the program this year?

Andy Mitts: This season has been extremely rough. We came into the year obviously realizing that David Beaty had not done very much. But given the situation that he had taken over when he first came to KU, there wasn’t a lot of expectations on him. I think the best way to describe it is the expectations fans had for this season were self-inflicted. Beaty very publicly stated that we should start to see results on the field in wins and loses by his third year. There are quite a few people who that was a little too ambitious of a time frame, but most people are also of the opinion that if you’re going to promise something in that frame you better be able to deliver. Giving us excuses after the fact of why you weren’t able to do [it] just really doesn’t work for a lot of people. 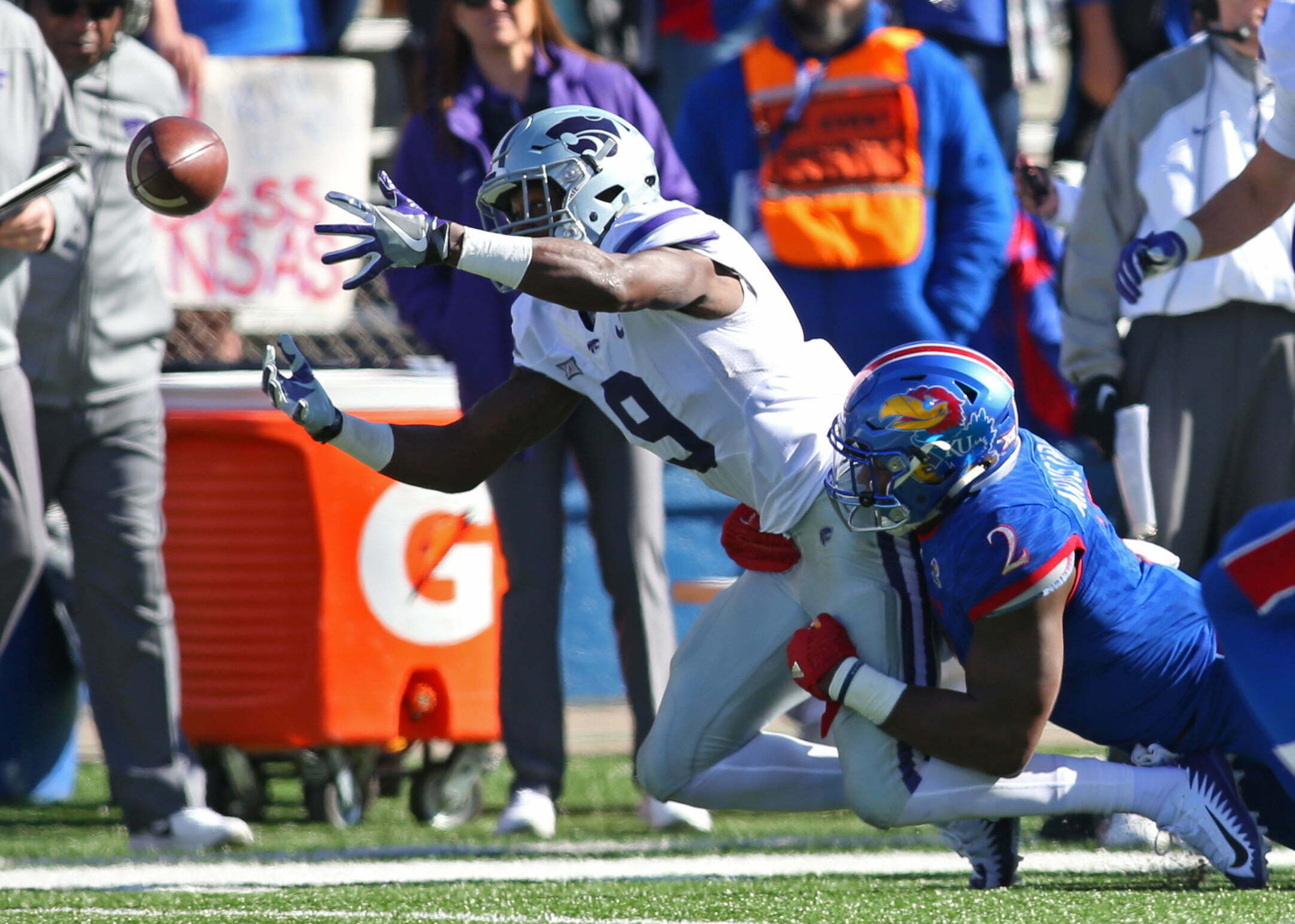 Coming into the year, seeing who we had on the defense… three real stand-out guys on the defense in Dorance Armstrong, Daniel Wise, and Joe Dineen, who was coming back from an injury last year. We had a few stand-outs in a few games last year, Mike Lee in the secondary is really the only returning guy we had at the beginning of the year. But he had put on such a big show in the win over Texas that people thought he would be able to build on that coming into the year. So we had some good pieces on a semi-decent defense. It really was kind of hamstrung by an offense that really couldn’t do anything.

A transfer in Pryton Bender coming in who was familiar with the air-raid system that Beaty is trying to run and then Doug Meacham, an air-raid offensive coordinator coming from TCU, so the thought was we had the offensive pieces coming in that we were going to be able to improve the offense. And a defense that would probably be a small step back in the secondary, but other than that would be stronger than they were the previous year. The thought was that Kansas could win maybe four games. If they got lucky, maybe five. Or heaven forbid sneak in and get six wins and potentially be bowl eligible, but that was a best-case scenario. Obviously we’ve had completely the opposite. They were completely outclassed by Central Michigan. Didn’t really put up a fight against Ohio. And really haven’t put up a fight except against K-State for whatever reason. It’s been really tough as a Kansas fan. It’s been really hard week in and week out to root for this team.

PS: Who for Kansas is playing well and could do some damage against OSU on Saturday?

AM: I think the main area to look at would be the defensive side of the ball. Joe Dineen and his fellow front seven on the defense and then Daniel Wise and Dorance Armstrong, they were all expected to be really good coming into the year. For the most part they’ve lived up to that. Armstrong hasn’t gotten the sack numbers we were expecting but I think a lot of that has to do with the fact that we’ve had really poor scheming on the defense. Joe Dineen, I believe it’s still true at this point, that he is leading the nation in solo tackles (He leads the nation at 7.6 solo tackles a game and has 84 in 11 games. That’s five fewer than Frank Ginda from San Jose State, but they’ve played 12 games). He’s just been everywhere making plays all over the place. He’s really the only consistent bright spot we’ve had on this whole team. I’m expecting him to make some big plays. The question is, is it gonna be enough to make the game even remotely competitive. I can see Dorance Armstrong getting a few sacks, and if they come at the right time, that could potentially lead to a big swing in momentum. 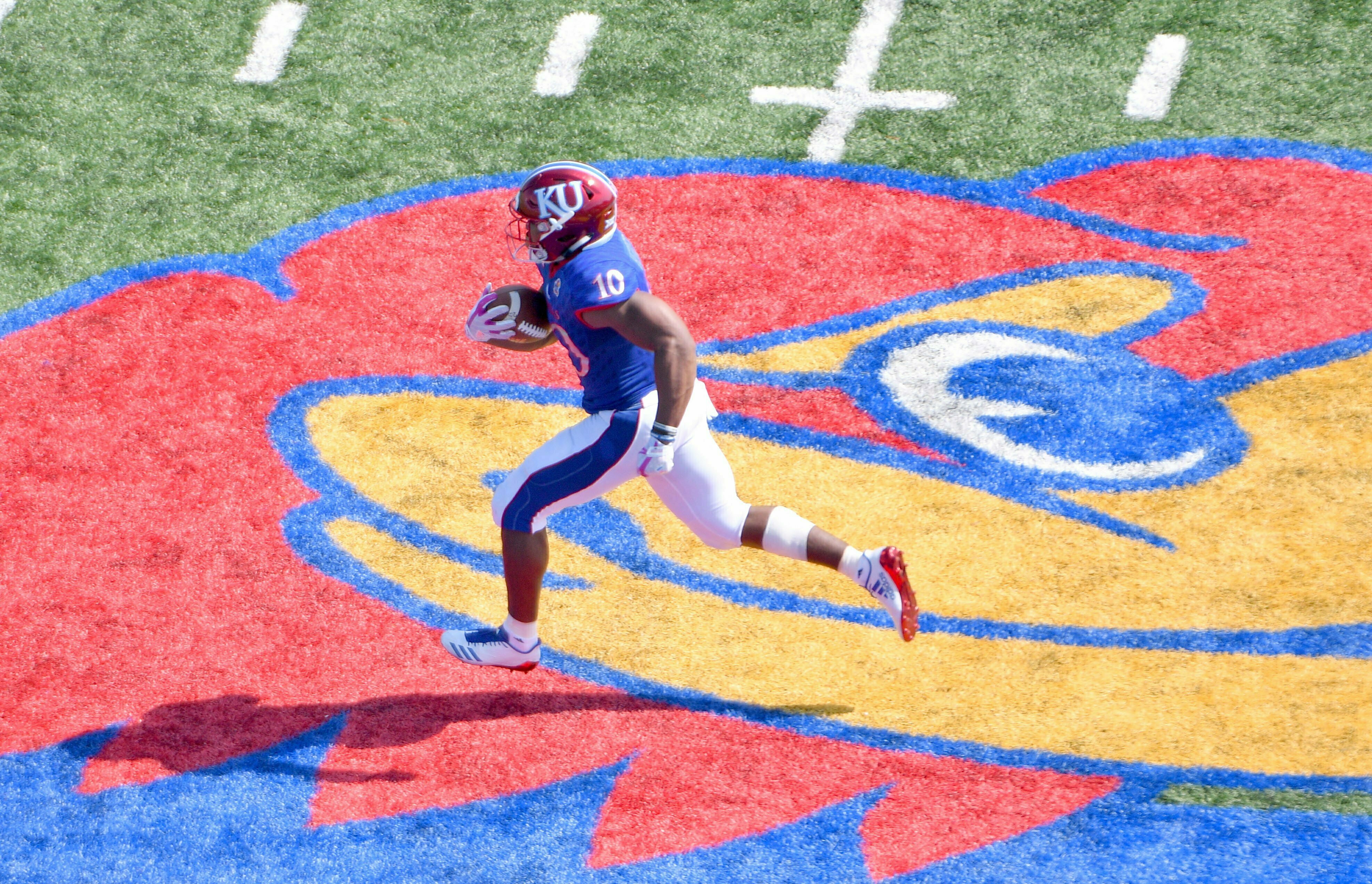 In terms of the offense because I really think that’s what it’s going to come down to is if our offense can get anything going. The two guys to watch out for would be Khalil Herbert at the running back position. He’s been able to get some good games. He had over 250 yards rushing against West Virginia, just a phenomenal game there. The real problem we’ve had is getting an offensive line that can consistently open up holes for him. But even in the last few games he’s been able to get some good yards there. I expect him to be able to get at least a couple plays where he breaks a big run that could, potentially give us a little bit of momentum.

The other guy to watch out for would be Steven Sims Jr. A really speedy wide receiver, far and away the best receiver that we have. Again, the real issue that we have is that our quarterbacks can’t get out protection from the line and they haven’t really been the best at making decisions to get the ball to guys that can do something with it. The other thing is that Steven Sims is our returner. He’s had a few muffed kicks or punts that have given us some problems. Hopefully we get to the point where he can not have to deal with those and get the ball and just turn it up field and get a nice long score and keep us in the game.

PS: Kansas made the switch at quarterback during the season from Peyton Bender to Carter Stanley. What led to that decision?

AM: It was incompetence. Honestly Peyton Bender, halfway through the season when they made the switch, had nine interceptions on the year and only eight touchdowns. He’s been really poor with his decision making. He has the arm strength that you want out of your quarterback, especially in the air raid, but he’s not mobile at all, and with an offensive line as porous as ours has been, he just hasn’t had the opportunity to get set. He hasn’t had a pocket to work with, to really get him into the position to make the throw. 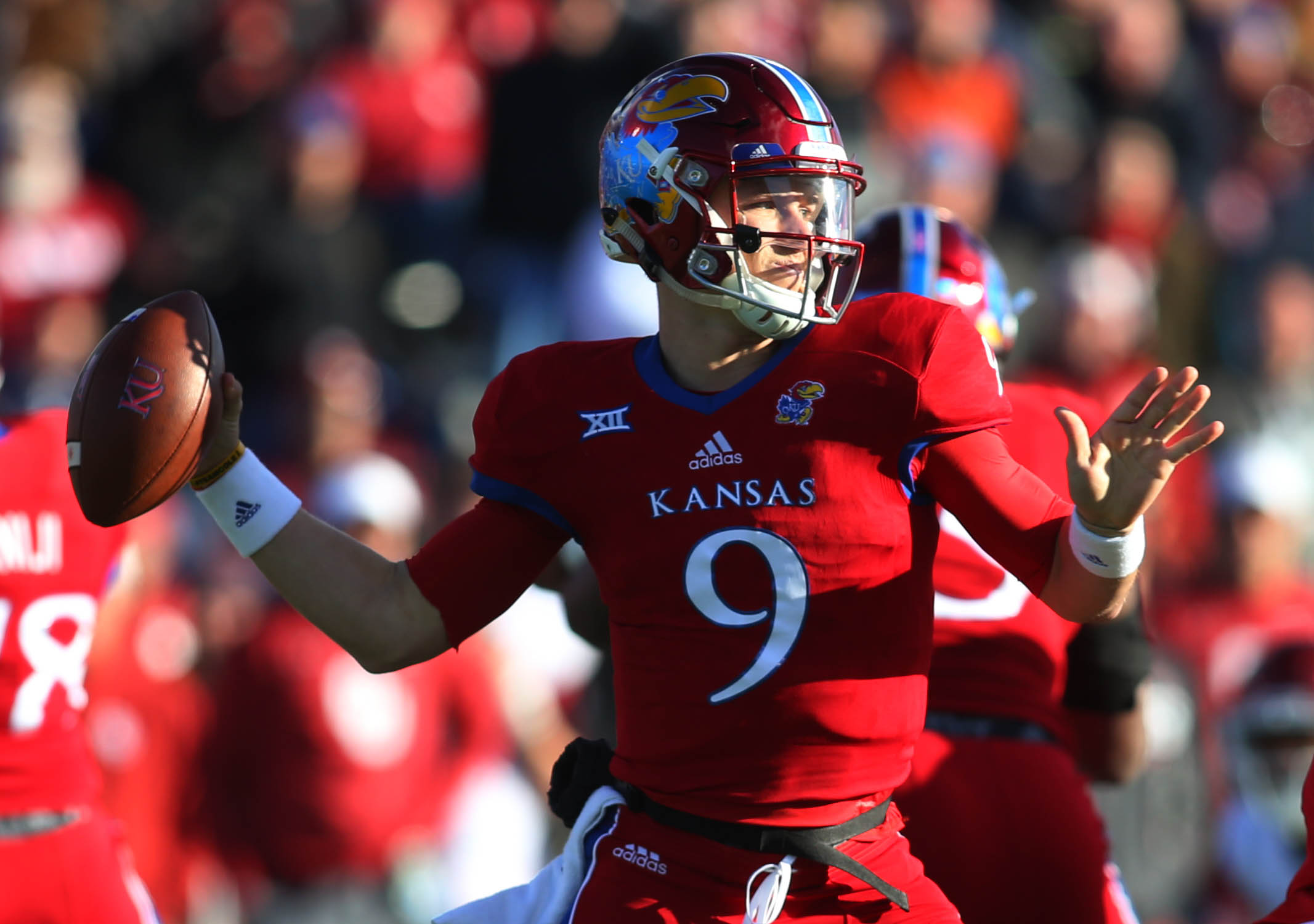 Carter Stanley was the quarterback that led the team to that upset against Texas. He had a brilliant drive last year to end that game and to get the team down. Interestingly enough though, he almost threw a pick in the end zone at the end of that game, that wouldn’t have given them the opportunity to tie it and go into overtime. So, Carter Stanley has had some issues with his own decision making. His arm strength is not where you want it to be, especially for a guy who’s going to need to throw it as much as you do in the air raid. But he does have the legs to kind of get around and extend plays and, maybe kind of take off and run if he needs to. He’s definitely more versatile in terms of the way the offensive line is set up, the way that the offense is actually running right now. We’ve started to see Doug Meacham kind of adjust things to try and take advantage of more of that talent that he has the main issue that Stanley has is just decision making, isn’t very good. There’s way too many times that [he] tries to throw it back across his body into a window that just isn’t there. So we don’t really have a good quarterback on the roster that we can count on to get the ball to the playmakers.

PS: Let’s say Kansas wins on Saturday. What did they do to get the victory?

AM: The only way that’s going to happen is if it’s a really low scoring game. Kansas is going to have to hold Oklahoma State to a very low total. They’re going to have to stop them from converting first downs. It’s going to have to look a lot like that first half against Oklahoma. They pretty much swallowed up the run. Whenever Oklahoma did get any passing, they were right there to make contact right when the guy caught the ball, so they were only getting two or three yards at a time. In order to score enough points, they’re going to have to get a turnover that either is directly leading to points or puts them within the five yard line so they can just punch it in with Herbert. If we do somehow pull out the win or make it a close game even, I would say KU would have to win the turnover margin by at least three.

If you have 26 minutes, go ahead and listen to the full interview. Andy does a great job. We also discuss an improved Big 12 this season, the Baker Mayfield controversy, the campaign to fire Kansas’ athletic director, new OC Doug Meacham, and his prediction for the game.