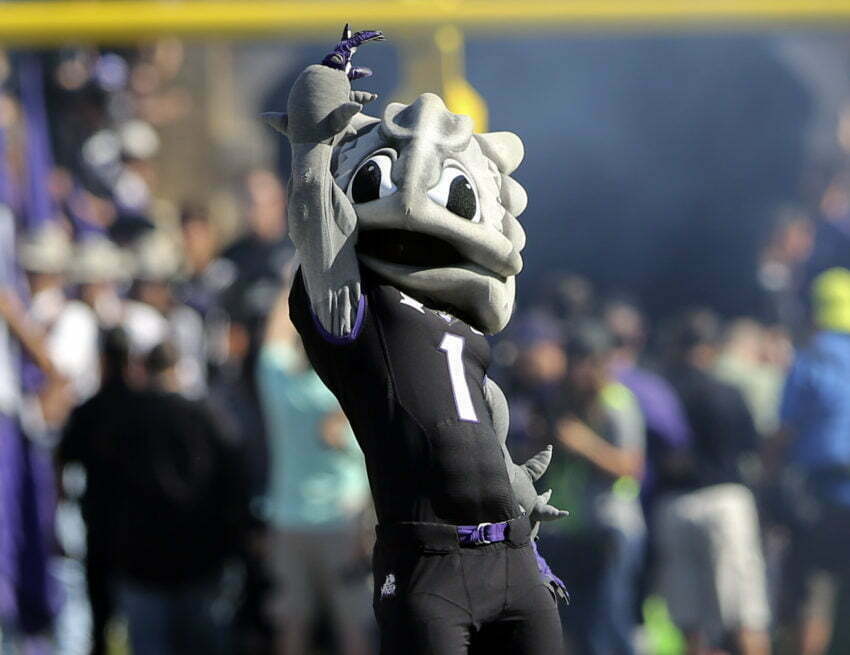 It’s Week 4 of the season, and after a two-week absence, OSU returns home to play in front of the Cowboy faithful in the house that T. Boone built. This week, they open conference play by welcoming the Horned Frogs of TCU to Stillwater.

To help preview the Fighting Gary Pattersons, I spoke with Melissa Triebwasser of the TCU SBNation site Frogs of War. I’ve followed the site since my CRFF days and find that they do a good job covering TCU athletics. Melissa is one of the managing editors for the site, and does a great job.

Before we get started, the full audio from our interview is available at the bottom of the post. Just in case you want to follow along.

Phillip Slavin: Some are saying this TCU team has returned to it’s defensive identity under Gary Patterson. What have you seen through three games? 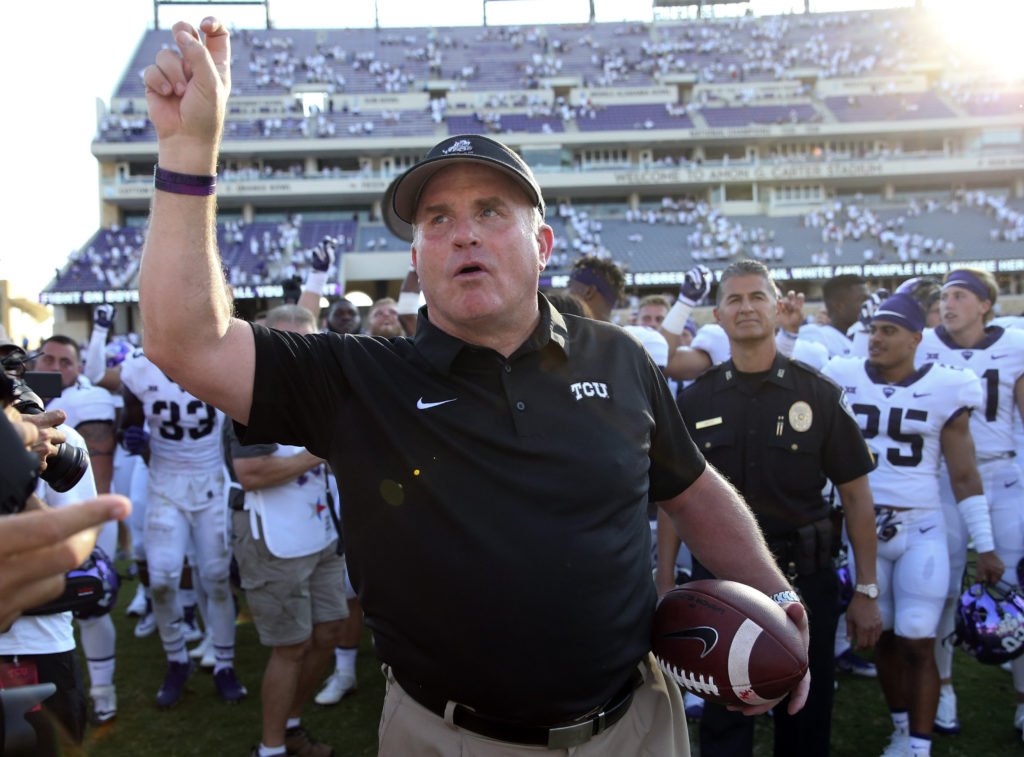 Melissa Triebwasser: “I think that the generalization that Patterson’s defenses have been terrible the last few years are kind of overstated. Gary Patterson and TCU never faced offenses like they do in the Big 12 on a week-to-week basis. So while there definitely was a period of adjustment, I think what we’ve just seen is the ball bounce the wrong way. The Frogs have still been in the top half of the Big 12 regularly in the past several years since joining the conference in over-all defensive metrics. When they’ve struggled, which was toward the end of that 2015 season was when I think they lost over the course of the year something like 15 defensive starters to injury. They just weren’t getting turnovers too. While there is an art to coaching turnovers, there’s also a certain amount of luck in it bouncing the right way that goes into that as well. All of that is to say that heading into the early parts of 2017, you can see there’s a little bit more of a ball-hawking mentality among the defense. It’s a lot more veteran group, so these guys are familiar with the calls, they’re really comfortable making adjustments on the fly and they don’t get rattled easily. They’re not perfect. They had a really bad first quarter against SMU on Saturday, but it seems to be much more in the mold of a Gary Patterson defense in that they’re very, very fast, they’re very, very physical, and they fly to the ball in such a way that we really haven’t seen since the 2014 season that was so special.”

PS: Speaking of the defense, what is TCU’s defense going to do to slow down OSU’s offense?

MT: “Hope that Mason Rudolph has the flu and that the TCU offense puts up 65 points. I haven’t seen anything out of OSU that makes me think that slowing them down is really an option. I think that you either have to force mistakes or you have to pressure the quarterback in a way that no one has been able to do at this point. It’s not like getting OSU in 1st-and-15s or 2nd-and-10s really fazes this program very much. They can hit you for 60 yard touchdowns seemingly on every play. The biggest thing for the Frogs is going to be limit the run game, limit the effectiveness there, that looked so, so solid early. Really mind their gaps and stay in their lanes defensively and on the pass rush. And just hope that Rudolph has a rough day and… I don’t even know that taking away James Washington is going to help when you look at the rest of the guys surrounding them. This is going to come down to who plays mistake-free football. the TCU defense I think will be physical, they’ll be aggressive, they’re going to come after Rudolph on every play and try to knock him down, and hopefully rattle him just a little bit. But at the end of the day this offense is just so good and so deep that it’s going to be a matter of; ‘can the Frogs slow them down enough, can they get a key turnover, can they force a turnover, can they make a play on special teams, just the give the offense a chance to come back and match them score for score. That’s almost what it seems like you have to do in the early goings of the season at least.”

PS: Which player on the TCU defense could make a real difference?

MT: “One of the guys I’m going to be looking at this week is Ranthony Texada. He’s been injured and kind of nicked up the last two years. He missed a season and was never really healthy last year. He’s the guy that’s probably going to be matched up with James Washington most of the night. That should be a really fun one-on-one battle. But the real difference maker for me is a transfer from Louisiana Monroe, Ben Banogu. He’s a defensive end, he’s freaky, freaky fast coming off the edge. Oklahoma State has a really good offensive line, but this kid just makes you look silly on the edge. If he can get in the backfield, live in the backfield, he does a great job of making plays in the running game, pressuring the quarterback, and does a nice job too of dropping back in coverage every once in awhile. If there’s going to be a difference maker, especially early on, I think it’s Big Ben. He’s going to have to be because the Frogs lost their other starting defensive end for a half due to a targeting call against SMU, Matt Boesen.

PS: Kenny Hill was very up and down at TCU last year. How has he looked so far in year two? 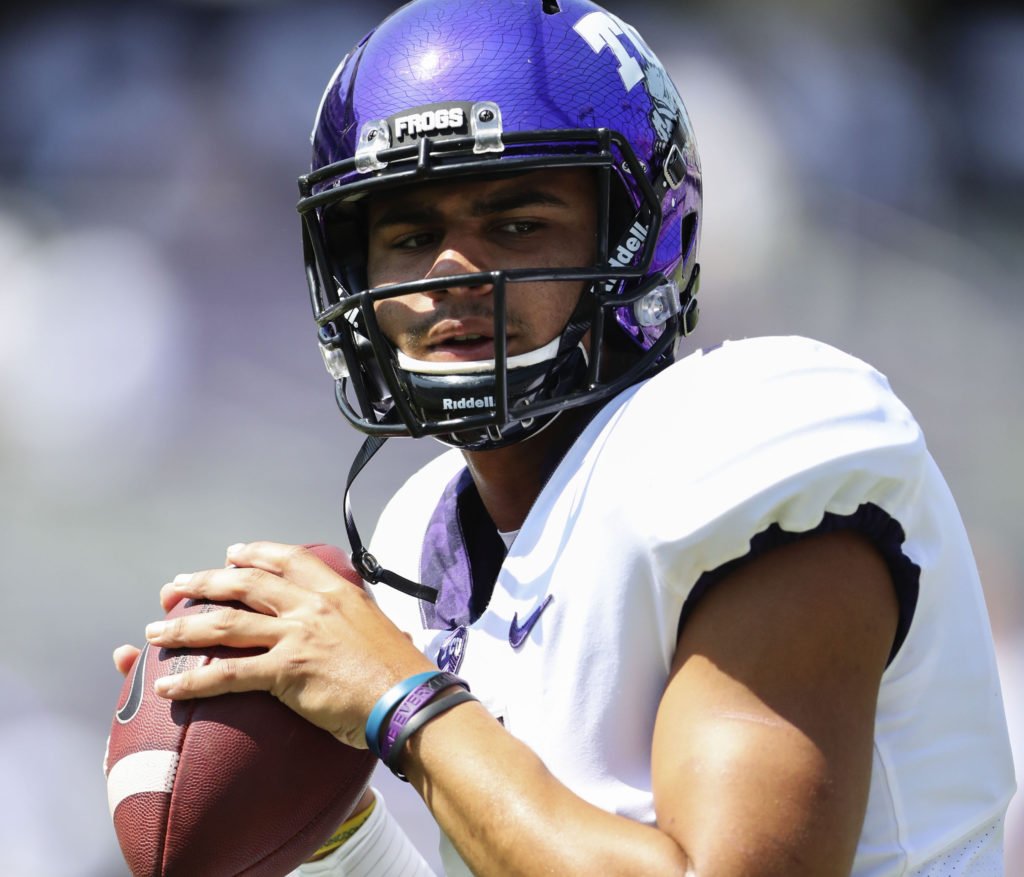 MT: “He’s looked great. He’s had a couple of silly interceptions. But overall, I think that Sonny Cumbie taking over the play calling duties from Doug Meacham, who defected to Kansas, has really helped the Frogs. They are leaning so much more on the running game than they have the past couple of years, with great, great success. What that has enabled Kenny Hill to do is just play within himself. At Texas A&M and last year he was a guy that was asked to throw for 500 yards a game for his teams to be successful. He doesn’t have to do that at TCU this year. He’s got three running backs that are all outstanding, all have different skill sets, and all capable of eating up yards in big chunks. You’ve got a receiving core that… maybe TCU doesn’t have that great deep threat that they’ve had in the past with a Josh Doctson or Kolby Listenbee, but what they do have is a bunch of guys that if you can get them the ball in space, can make a lot of people miss. There’s a ton of speed on that offensive side of the ball, especially coming out of the slot. So he’s managed the game well and still thrown in the occasional explosive play or the play with his feet that keep defenses off balance.

PS: So far TCU is first in the country in offensive third-down efficiency at 65.8%. What is TCU doing on third down that is making them so effective?

MT: “A big part of that is they’re not facing third and long. Last year it felt like so often TCU was in a third and eight situation because either there was an incompletion on first or second down, or the bane of our existence last year was false starts. Aviante Collins, who made the Minnesota Vikings, must have had 75 false starts it felt like, over the course of the season. So, there were a lot of reasons that down and distance didn’t play in TCU’s favor. But when you’ve got a run game that’s averaging five, six yards a carry like TCU’s is right now, you find yourself in a lot of third and shorts. The pass patterns that they’re calling, the way they’re using guys in the slot, these little hit routes, these quick outs, these quick slants, these kind of pitch plays and jet sweeps are really making a manageable down and distance for TCU. These little guys, Desmon White, KaVontae Turpin, and Kenedy Snell, if you get them the ball in space they’re really hard to bring down because they’re just so fast. It’s been manageable situations, it’s been good decision making by Kenny Hill, and it’s just having an abundance of playmakers that don’t need a whole lot of room to pick up three or four yards.”

PS: If TCU is going to pull off the upset, what do they have to do?

MT: “I think they probably forced two or three turnovers. They got a big momentum play like forced a fumble on a kickoff after scoring a touchdown. Kenny Hill is probably going to have to go for 300-plus yards with two or three touchdowns, no interceptions. And the rushing game is probably going to have to pile up over 200 rushing yards on the ground in total. It’s gonna take the perfect storm of TCU playing their best game of the year and Oklahoma State looking mortal. I think this is a really good TCU team. I do. I think they’re really talented on both sides of the ball. I think they have all the pieces in place to make a run at the Big 12 title, but I think going to Stillwater and upsetting an Oklahoma State team that looks like they can play with just about anybody right now is a tall task.

There’s a lot more in my full interview with Melissa, including the dirty details on why Doug Meacham really left TCU for Kansas, how running back Kyle Hick’s possible absence could affect TCU’s running game, TCU’s best wide receiver, and her pick for the game.