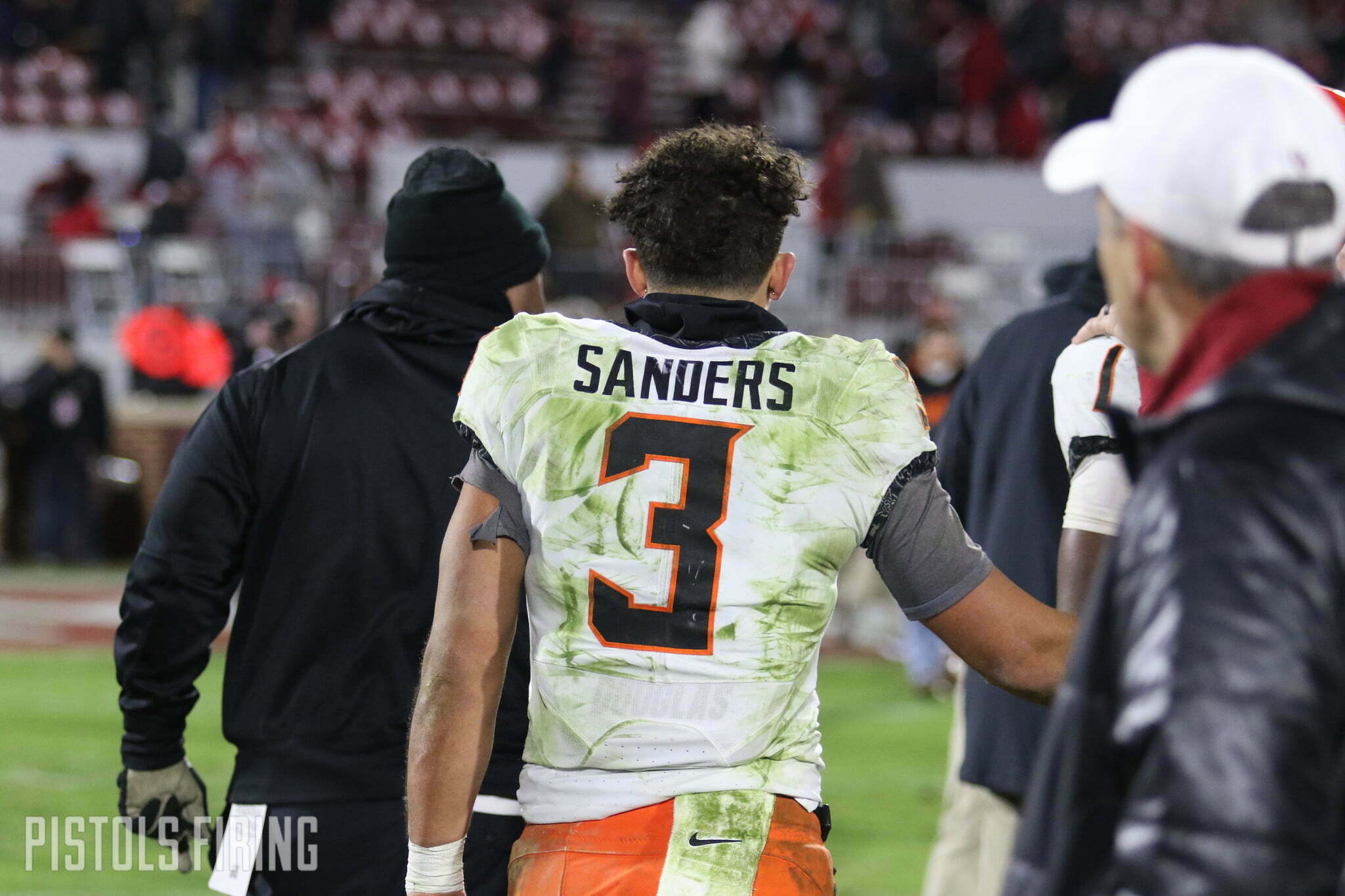 After his dramatic return to lead OSU to victory against Iowa State, we all got excited about Spencer Sanders’ Bedlam prospects. I, for one, was counting my chickens with prognostications that Sanders would become the second OSU starter to earn two wins against OU. Now I’ve got egg on my face.

We spent all week talking about how impactful Sanders would be to OSU’s offense in Norman. And he was, just not in the way we were expecting. The difference between OSU’s offense with Sanders and without him is stark, as we saw against Kansas and in three quarters against Iowa State. But his value goes beyond just him being healthy enough to see the field.

Fueled by adrenaline and against a blindsided Cyclones defense, Sanders looked as good as ever. But over the next week, the adrenaline wore off and whatever issues contributed to his subpar outing in Bedlam — whether they be lack of practice, physical pain or just reverting to his old turnover-prone ways — we underestimated just how crucial he was in wins and losses to OSU. That value was distinctly underlined on Saturday night in a way we weren’t expecting.

There are plenty of qualifiers for Sanders’ foibles if you only look. OSU’s running game — aside from Sanders’ scrambles and designed runs — has been nonexistent all year. Its offensive line? A MASH unit that, even when healthy, hasn’t performed to expectations. Sanders was sacked six times (the most since his freshman season) and hurried 12 times. And his receiving corps has been just as injured if not more. That puts into perspective just how much of the burden he’s had to shoulder this year.

“Obviously Spencer didn’t play very well today,” said Mike Gundy after the loss. “Turn the ball over like that, obviously, you don’t get a chance. We had a couple of times there with a chance we could have scored, and turned it over and didn’t give ourselves a chance.”

Down big early and desperate to get anything going, Sanders threw a program-record 67 pass attempts. Four of those ended in Sooner mitts. You could split hairs on a couple of those for Sanders’ sake. He and Jaden Bray appeared to be reading from different playbooks on one play. Another was tipped out of Rashod Owens’ grasp and hauled in by OU. But the other two were all his, as well as a handful of other passes that sailed high or were forced into coverage that could just have easily resulted in several more picks.

Sanders played his worst game of the season on Saturday which hearkened back to his last four-interception performance in the Big 12 Championship. Both included plenty of errors that facilitated the Cowboys’ falling behind. Both had a healthy portion of grit and toughness to fight back. But in neither did OSU’s hero do enough to earn the comeback.

As the quarterback, all of that falls on his shoulders, ice packed or not, and his value to OSU goes beyond just the highlight reel crossfield throws and 20-yard scampers. It extends to the head-scratching errors and when he tries to do too much. But that’s been the case for Sanders all along, as it’s the case with any franchise QB.

All that being said, Sanders still makes the difference between the Cowboys ending 7-6 and 9-4. He’s the best option OSU has and may be the best it has for the foreseeable future. Because all of that talent and moxie in one package is rare. And sometimes those qualities combined lead one to play on the edge. (These aren’t mutually exclusive.) And sometimes that competitive spirit pushes him over that edge. But you could never accuse Spencer Sanders of phoning it in.

With potentially just two games left in his OSU career, Sanders could still tie Mason Rudolph for the most career wins in school history. Sanders could come back for another year if he were to choose to thanks to the NCAA’s COVID eligibility waiver. If he does, OSU will certainly be in better shape in 2023 than if he doesn’t.

It will be interesting to see how Sanders is viewed in the pantheon of OSU passers over time. And not just by the hotheaded post-Bedlam Twitter typers calling for everyone’s jobs. How will he stack up to the greats? Personally, I think he falls somewhere in that next tier behind your Brandon Weedens and Mason Rudolphs of the world, in the same league as say a Zac Robinson or a Josh Fields. Of course, that’s all subjective, but he’s had a pretty special career all the same. Just know that the sting from Bedlam will fade and if OSU ends on a good note, those wins have to count for something.