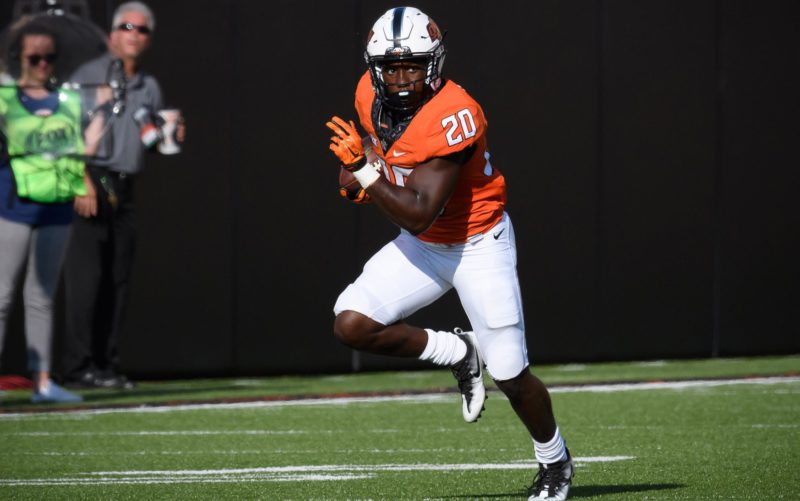 Believe it or not, spring practice is right around the corner. The preparations for the Cowboys’ 2017 football season are already underway. We’re going to be previewing some position groups heading into OSU’s April 15 spring game and I thought the Cowboys’ rebuilding running back group would be as good a place to start as any.

Wozniak takes over a young but talented group of backs, headlined by last year’s Freshman All-American and record-setter Justice Hill. Thanks to his predecessor’s recruiting efforts, he’ll also have incoming studs Chuba Hubbard and JD King ready to compete for snaps this fall. But none of those three will be in the mix come spring practice which starts next Monday.

Hill is reportedly out nursing a shoulder injury and the other two are still finishing up their senior years in high school. But there are four running backs currently on the roster who will look to take this opportunity to sell themselves as rotation candidates for next fall.

Jeff Carr steps forward as the only one in the group with actual in-game experience. Carr saw his reps decrease as a sophomore with the emergence of Hill and behind seniors Chris Carson, Rennie Childs and Barry J. Sanders. Those upperclassmen are gone now and Carr has maybe his best chance to move up the depth chart since he arrived in Stillwater.

Wozniak spoke about Carr’s development and where he sits among the group in an interview with GoPokes.

“Really, Jeff is the only guy that has played,” said Wozniak “so we are starting from scratch and they are starting from ground zero like I am. They all bring different things to the table as Jeff has a little bit of experience and he has bulked up. He has looked really good in drills.”

Can Carr crack the two-deep rotation? It’s hard to say. It’s likely the coaching staff would prefer someone with more size to back up Hill as a change-of-pace back in the Chris Carson mold. But Mike Gundy has shown that he will make a place for his playmakers if he thinks they can contribute. Maybe he could be used in a two-back set similar to what Thomas Fleming laid out.

Speaking of that “big back”, Wozniak says Ja’Ron Wilson was the only thing OSU has close to one — and he’s hardly what I would call big. OSU’s website listed Wilson at 5-10, 185 pounds as a true freshman in 2016. Wilson turned down several scholarship offers to walk on and redshirt at OSU in 2016.

La’Darren Brown also spent last year redshirting. The Desoto, Texas product is another speedster who the Cowboys have stockpiled. He clocked a sub-4.40 40-yard time the summer after his senior year of high school and has had a year under Rob Glass’ tutelage to try to add to that 5-foot-9, 174-pound frame he showed up with.

Wozniak talked about some of Brown’s tangibles he’s noticed so far.

“L.D. is really talented,” said Wozniak, “and he has lateral quicks, and has burst and I am excited about him.”

The last of the “other four” backs is Jakeem Johnson who will be a redshirt senior this coming fall. He’s a former juco back who walked on in 2015 and has contributed on the scout team the last two seasons.

Wozniak will have his work cut out for him as he tries to fill out his depth chart behind Justice Hill. And he’s knows it will be a process.

“We have a lot of talent but we are going to have some growing pains this spring,” said Wozniak. “We’ll screw some things up and have some mental errors. We have to eliminate those things and move on and learn. That is why I’m here and I can’t wait to get going and get to practice and get them reps.”