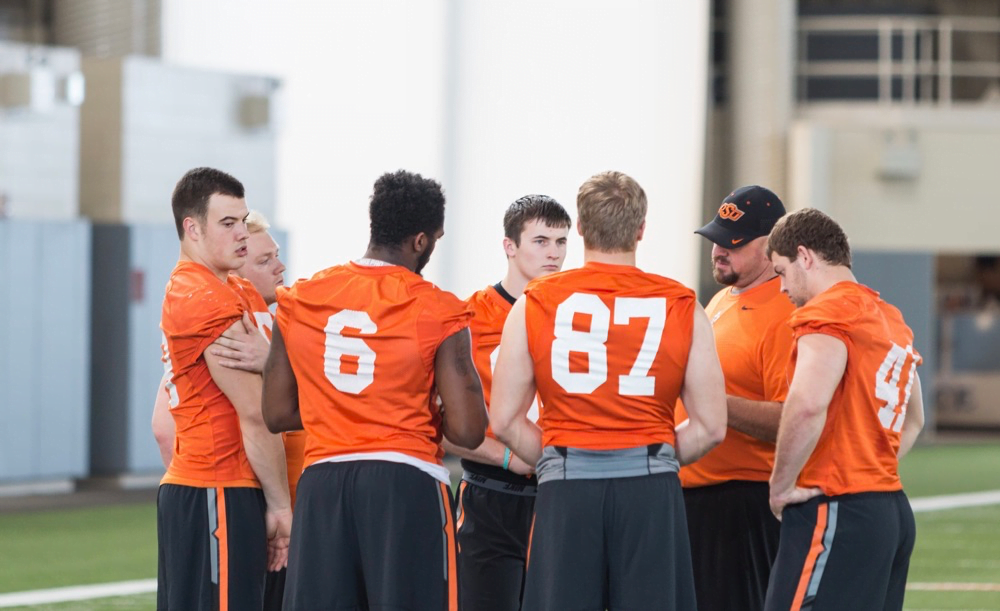 Oklahoma State kicked off spring practice on Monday and the prospect of what could be an elite offense has Cowboy fans measuring their optimism on a scale of “hopeful” to “is it 2011 all over again?”

But several questions will need to be answered before September. How will the Cowboys replace Blake Jarwin and Zac Veatch — two unheralded stars of their top-20 scoring offense from last year?

Blake Jarwin was the Big 12’s leading receiver from the tight end position. He grabbed 19 catches for 309 and two touchdowns. His fellow cowboy back had 93 receiving yards and his own score but served a much bigger (less appreciated) role as a sixth blocker for the likes of Mason Rudolph and Justice Hill.

Who will step in at cowboy back this spring?

Keenen Brown made the switch to cowboy back last year as a redshirt sophomore. The four-star wide receiver put on almost 40 pounds to move to the hybrid tight end/fullback spot for a chance for reps. If he can improve his blocking, his big-play ability could be a huge weapon for Mason Rudolph from this position.

Mike Gundy spoke about Brown during his spring press conference on Monday.

“Keenen Brown needs to show up and give us something similar to what Jarwin gave us so that we can continue with what we’ve started at that position,” Gundy said.

Britton Abbott looks to fill the role of a fullback/blocker who can catch a pass when the defense least expects it. Behind him you have Dayton Metcalf and Dawson Bassett, younger brother of former Cowboy DE Cooper Bassett.

OSU lost out on former tight end commit Tyler Henderson who flipped to Baylor at the last minute.

But there’s always the possibility that the cowboy back takes a lesser role. OSU is stacked at receiver. Who knows? Maybe we see some four-wide sets. And if Mike Yurcich reads “Chalk Talk” he may want to play more than one running back at the same time.

Yurcich spoke with Robert Allen of GoPokes about the challenges of replacing Veatch and Jarwin and almost alluded to that possibility.

“The Cowboy backs this past season were extremely important,” said Yurcich “not just in the run game, but in the pass game and getting the multiple sets and being able to play with tempo and not subbing was really a big key for us. To be able to have that vision, that personnel, and that versatility is key or was a key to us. How we adapt to the personnel will be vital. Every offense is going to be different.

“It can be the same system, but the personnel is going to change and you have to modify a little bit and tweak here and there to play your strengths from a personnel standpoint.”

Sounds like we may see a different look from Yurcich’s group this fall. With the turnover in personnel, they may not have two guys that he feels good enough about to make those wholesale substitutions. Losing Henderson didn’t help either.

Mike Gundy also added to the notion that OSU might change things up.

“We’ll play them all and we’ll play fast” said Gundy about his receivers. “They give us a luxury that we had in the years that we had (Justin) Blackmon and those guys. We could play them in groups of three or four at a time, let them play four or ﬁve plays and then get them out and put another group in.

“There’s a chance that we could play with four wideouts more than we have in recent years because of that, but we’re going to try to play fast and use that to our advantage.”

How much will the offense change? We’ll find that out in the fall. But I do know that Mason Rudolph has plenty of playmakers to get the ball to. And he’s pretty good at that.