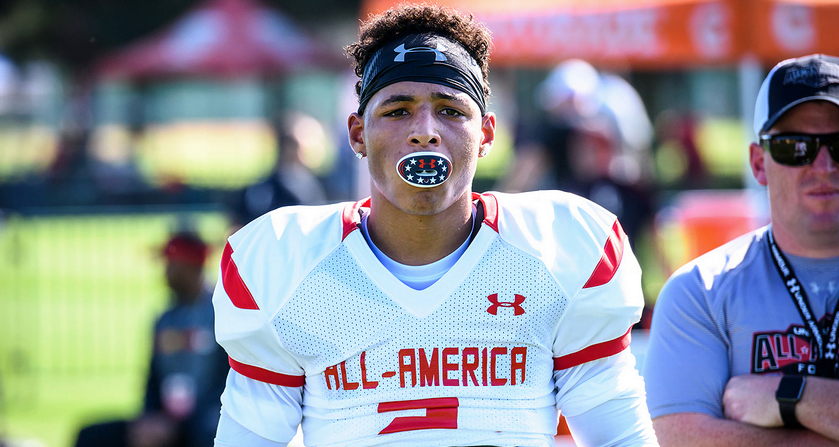 Oklahoma State’s 21-man signing class became official on Wednesday morning with national signing day. OSU recruits from Georgia to Texas to Oklahoma to Canada sent in their national letters of intent, officially binding the school and the player. So with the prospects becoming official Cowboys, let’s have some fun with some superlatives on the class.

At 6-foot-7, Jelani Woods has the arm strength to throw a pigskin a quarter mile — and he can easily see over the top of the defense. He’s a deep-ball specialist, and even more interestingly, he’s a dual-threat option that’s difficult to bring down.

“He’s a big man,” said Gundy on Wednesday about his new signal caller.

What’s the saying about not being able to coach speed? You can’t coach size, either. Jelani has plenty of it to go around, and he has a high upside as a potential NFL caliber prospect down the line. He has the tangibles that scouts will likely drool over, should he be able to put it together in Stillwater.

Last but not least for the class of 2017 early enrollees, we are excited to welcome quarterback Jelani Woods out of Ellenwood, GA! #okstate pic.twitter.com/Y6Aw4sKk3S

Mike Gundy wasn’t lacking on praise for his four-star receiver from Fort Worth, immediately making the comparison that he’s a faster Josh Stewart.

Josh Stewart was an explosive talent in his own right, able to operate out of the slot and find openings in the defense. But Wallace, with a listed 4.50 40-yard dash time, has everything and more. “I think Tylan has the same quick-twitch as him [Stewart], but he’s going to run under 4.5,” Gundy said.

Lenzy Pipkins is gone, as is Ashton Lampkin. Outside of Ramon Richards, OSU doesn’t have an entrenched starter at cornerback. LaMarcus Morton, a wide receiver/defensive back in high school, is an early enrollee and has an opportunity to find a role at cornerback in some form.

I like A.J. Green, Madre Harper, and even Rodarius Williams as three of OSU’s prospects from last year. But in the Big 12, the more cornerbacks the better. Morton has the size at 6-foot to develop into a lockdown defender.

Lamarcus Morton is also an early enrollee out of Gilmer, TX. Welcome to #okstate! pic.twitter.com/PdX2USsaML

This was a no-brainer, obviously. Canadian missile Chuba Hubbard may be one of the fastest recruits Oklahoma State has signed outside Tyreek Hill — and even then, it may be 50/50.

“He has world class speed,” said Gundy. “He was committed really early. I had some doubt whether we could hold him this long. Very loyal. Mom and daddy raised him right. He gets it. He’s really fast.”

So fast, in fact, Gundy said there’s a chance he could be running in the Olympics four years from now.

Chuba Hubbard’s letter of intent has arrived from Alberta, Canada, and he is officially part of the #okstate family! #NSD17 pic.twitter.com/Xsql4psKXb

Oologah’s Brock Martin is an absolute monster off the edge. He has a wrestling background and uses his leverage to bull rush on the outside, either as a stand-up edge rusher or lined up in the down formation. Dealing with double (and sometimes triple) teams in high school, OSU will feature him as an outside rusher and will get significantly less attention with the other edge rushers on the roster. I love Martin’s game.

Macon is a decisive pass-rusher and an explosive inside linebacker who comes from the JUCO ranks. He earned NJCAA honors as a defensive player of the year, and for my money, I think he’ll make the biggest impact from day one. He’s already on campus as an early enrollee so he has the benefit of getting into the program ahead of time.

Unlike inside linebacker Chad Whitener, Macon is a quicker prospect who has the ability to drop back into some coverages and speed to bull rush on the inside.

The third early enrollee is the Patrick Macon from Arizona Western CC. He was last year’s NJCAA Defensive Player of the Year! #okstate pic.twitter.com/hUfhDdvyrp

Ofa Hautau, Mote Maile, and now Fua Leilua. All defensive tackles with Polynesian culture in their background. Leilua is the latest defensive tackle to stake that claim, and he will likely be the best “plug and play” recruit for OSU in my estimation.

Maile was a run-stuffer in the middle, and Leilua is built from the same mold. The 6-foot-2, 300-pound junior college recruit will likely be an immediate filler at defensive tackle. At the junior college level, he was able to control opponents with his strength and powerful hands, flinging offensive lineman out of the way to get into the backfield. It won’t be the same at this level, but he has a promising background that suggests he could develop into that same level at OSU.

Talented wide receivers are at a premium in Big 12 country. Finding one of Greenwood’s talent with his size is next to impossible. At 6-foot-3, he has the leaping ability to grow into a role as a premier red-zone target for OSU.

Unlike other tall receivers, Greenwood has the speed to go with the size. And with his 210 pounds, he doesn’t seem to be far off from a size standpoint in growing into a frame ready for the college level.

Another letter is here! Welcome to the #okstate family LC! #NSD17 pic.twitter.com/ZyYHBI9SSV