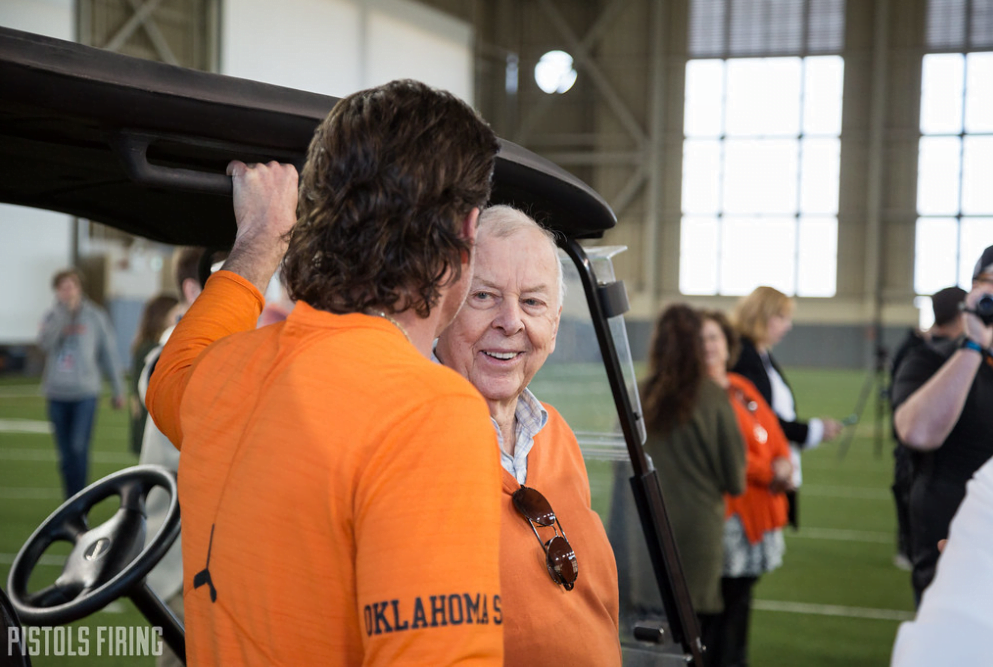 T. Boone Pickens donated unsparingly throughout his lifetime. His philanthropy neared $2 billion if you include matching donations, with a good lot of that benefiting his alma mater, OSU.

Many will look to how much Pickens’ generosity impacted OSU athletics, but Pickens also gave to academics. OSU’s school of geology bears his name. In his annual letter this year, Pickens wrote that his donations to the university total to $652 million.

“I have a unique approach to giving,” he wrote. “While many others of my status endow foundations that spin out millions of dollars over the course of generations, I want to see the good that’s done with my money today, while I’m alive, and not wonder what is done with it long after I’m gone.

“OSU’s athletic director, Mike Holder, has been a good steward of my funds on the athletic side of the ledger, as has OSU President Burns Hargis been on the academic side.”

Here are a handful of the biggest donations Pickens made to Oklahoma State.

As part of Oklahoma State’s “Next Level” campaign, Pickens donated $20 million in 2003 to football stadium renovations and another $50 million elsewhere. The campaign was launched to keep OSU competitive among the country’s top college football venues. Next Level was started in 2002 with the goal of raising $86 million. In 2003, OSU renamed the stadium from Lewis Field to Boone Pickens Stadium.

“Now I had real skin in the game,” Pickens wrote in his book, The First Billion is the Hardest. “I certainly wasn’t going to have my name on a loser. My giving to OSU had just begun.”

In the largest single gift given to an NCAA athletic program, Pickens gave $165 million in a donation announced in early 2006. The donation not only helped turn Boone Pickens Stadium into what it is today, it also helped get the ball rolling on the structures north of the football stadium that include the Sherman E. Smith Training Center, the Michael and Anne Greenwood Tennis Center and O’Brate Stadium.

Later in that same year, Pickens donated another $63 million for stadium renovations at Boone Pickens Stadium. A majority of the money was used to completed the stadium’s west end zone. The end zone was completed in 2008, adding about 20,000 seats to the stadium.

In early 2010, Pickens announced he would provide a testamentary matching gift of up to $100 million as part of OSU’s Branding Success campaign. However, after an astounding response from fellow donors, Pickens upped his challenge by an additional $20 million in January 2011.

“You know me – I want us to be the best in everything we do at Oklahoma State,” Pickens said at the time. “We are not going to be second to anyone, either academically or athletically. I know the leadership now in place at OSU with Ann and Burns has been a game-changer. We are on the move in ways I could have never imagined a few years ago. These are exciting times at OSU, and the possibilities are limitless.”