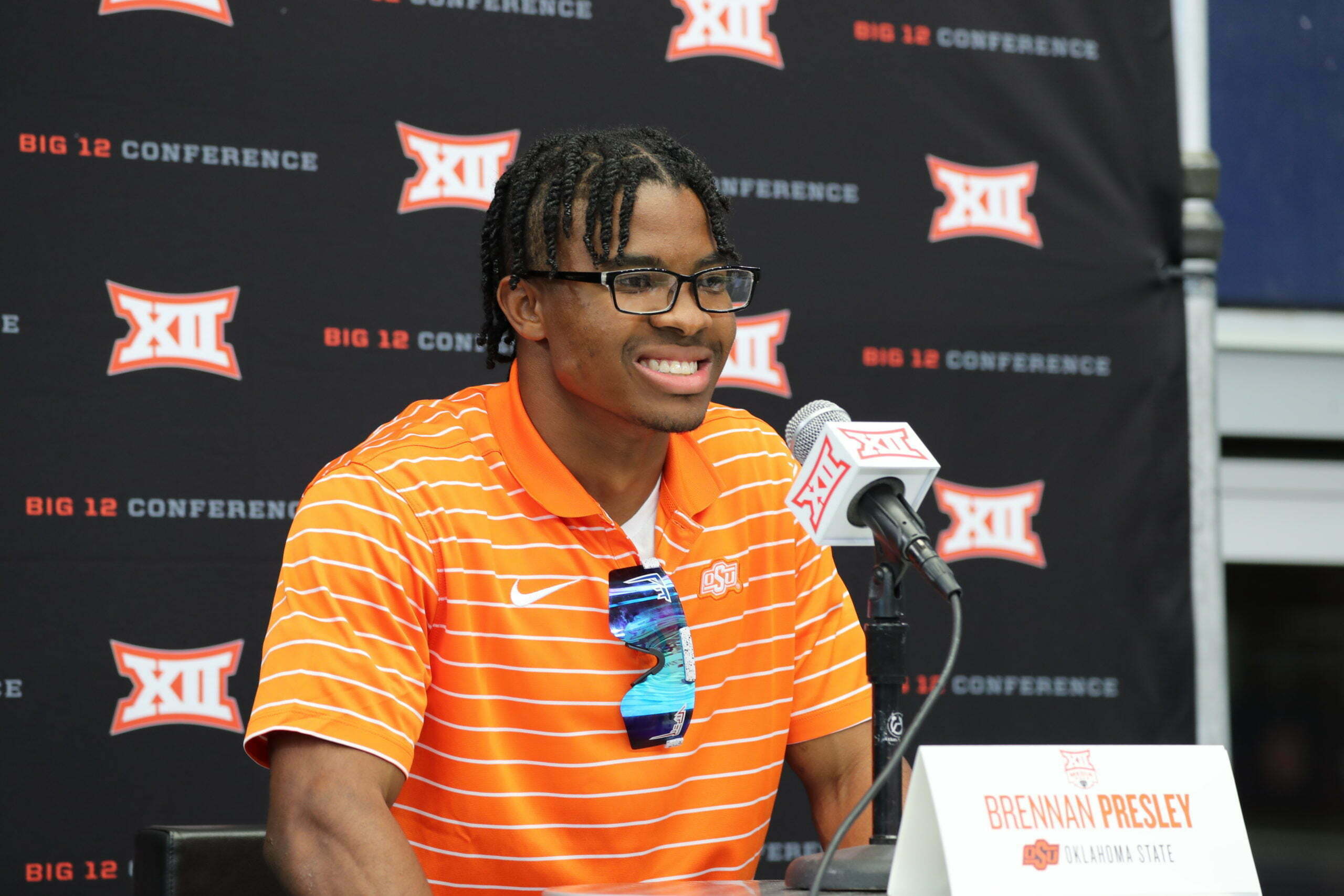 Wearing his brother’s jeans and cowboy boots (because Brennan doesn’t own boots or a pair of jeans), Presley took to the podium Wednesday at AT&T Stadium and provided nearly half an hour of electricity. The Cowboys all wore jeans and boots to the event, something that was Brock Martin’s idea. Speaking of Martin, Presley said the veteran defensive end is “Like that uncle that you like to see but doesn’t necessarily like to talk to you.”

Presley got plenty of football questions, but he also got plenty of other questions. Allow Mr. Presley to take you through some of his favorite topics like memes, bowling and candy.

Many players got asked about their thoughts on the most recent batch of conference realignment. The majority of the Cowboys said they don’t put much thought into it because it’s nothing they have control over.

This was essentially Presley’s take. It doesn’t sound like he gets his news through PFB, The Oklahoman, the Tulsa World or The Athletic. A more modern man, Presley learns about his news through Twitter memes.

“I be on Twitter, but I be looking at memes and stuff,” Presley said. “I don’t know, I see that stuff and it’s like, I don’t know. People be moving and stuff. The biggest thing, I saw the memes because it’s like USC and UCLA when they go to Minnesota in December, so it was funny. But like who plays who? Like, it doesn’t matter who we play.”

The Anatomy of a Bowler

Presley has fallen in love with the game of bowling in recent years.

He has his own ball and his own shoes, but he still doesn’t have a bag for his ball to complete his ensemble. Last season, he used a media availability to ask his mom for a PlayStation 5 for Christmas. On Wednesday, he said his mom could buy him a bowling ball bag for this Christmas.

Presley said the game relaxes him. Listed at 5-foot-8, 175 pounds, Presley has been dogged on for his size in athletics his entire life, but his size doesn’t matter at the lanes.

“Anybody can, as long as you have arms … and legs, I guess, you can go and bowl,” Presley said. “It’s a fair game every single time you step up there.”

Candy and Popcorn, the Dinner of Champions

Presley is also a known lover of the sugary delicacy that is candy.

SweetTarts Ropes and mini Starbursts have his heart. He said he isn’t a fan of sour, comparing it to spicy Mexican food. He said he has to be able to enjoy it.

He buys his candy in bulk. If he spends $30 on candy, he said it can last him a whole two weeks.

“We’ve all been in college, sometimes you eat candy for dinner,” Presley said. “I’m not gonna tell you when, but one time I ate popcorn and candy for dinner for five days in a row. I did not get sick of it.”