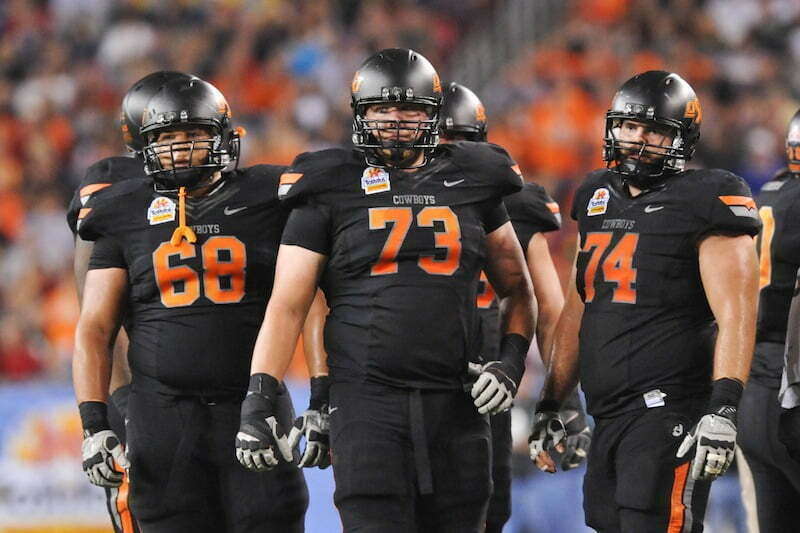 Wes Lunt will be fine, I think. And if he’s not we know we have a 9-win QB in Clint Chelf, there’s a safety net there. The wide receivers group is so deep you almost forget that nearly 3,000 worth of yards is just disappearing from last year’s squad. The Randle-Smith punch is the best in the Big 12 and might be the best in the country[1. Smith ranked 9th in the country in YPC (7.1) among all running backs with 90+ carries. 9th! And he’s not the feature back! Also, can we have a moment of silence for LaMichael James’ 7.31 YPC on 247 carries? That is RIDICULOUS.]

The defense, as has been shown more than enough times, will be terrific.

On paper, this is a really good team, maybe a great one.

But paper is only good for writing thank you notes and doodling national championship trophies.

I got into a Twitter spat (oh the intellect!) with Trent Dilfer the other night about Ryan Tannehill being overrated[2. Not high on my “this is what I thought I’d be doing on my Friday nights as a 27-year-old” list]. He was talking up Tannehill and I told him I didn’t think the former A&M QB had “it.” Dilfer basically told me I was stupid for thinking I could see “it” when I wasn’t actually on the field for games.

But isn’t “it” just that thing that transcends mediums and emanates from all forms of sporting event consumption?

I say all that to say that last year’s OSU squad had more of “it” than any other OSU sports team since the ’03-’04 hoops team.

So many times last year (Kansas State, A&M, OU, et al.) they reminded you with a little bit of swagger that they were indeed all in for the full duration of the season and that nothing could stop them from winning the Big 12.

More than that though, they liked each other. Sure winning is the great equalizer but you can’t recreate the way they acted around each other, the way they just loved getting on the field together.

That’s number one or two of Mike Gundy’s 3.75 million most endearing coaching qualities: the ability to mesh a team, countless personalities and backgrounds into this organism that loves going out and thrashing other squads together.

I have a memory from the Georgia game in ’09 in the second half. Jacob Lacey had just batted down a pass and was laying prostrate on the turf at Boone Pickens Stadium, cramping because it was like 180 degrees on the field.

He crawled off the field (literally crawled) and Dez came zipping down the sideline, slapping him on top of the helmet, screaming encouragement in his ear, laughing at the absurdity that these two friends were in the middle of a battle with one of the SEC’s best squads, and they were winning that battle.

It was a subtle moment, but one that meant something bigger than what anyone intended. I wonder if this year’s team has that thing, that slippery, incongruent thing that the great teams have.

Do they like each other? Do they have more swagger together than on their own? Do they pick each other up?

Does the 2012 OSU football team have it?