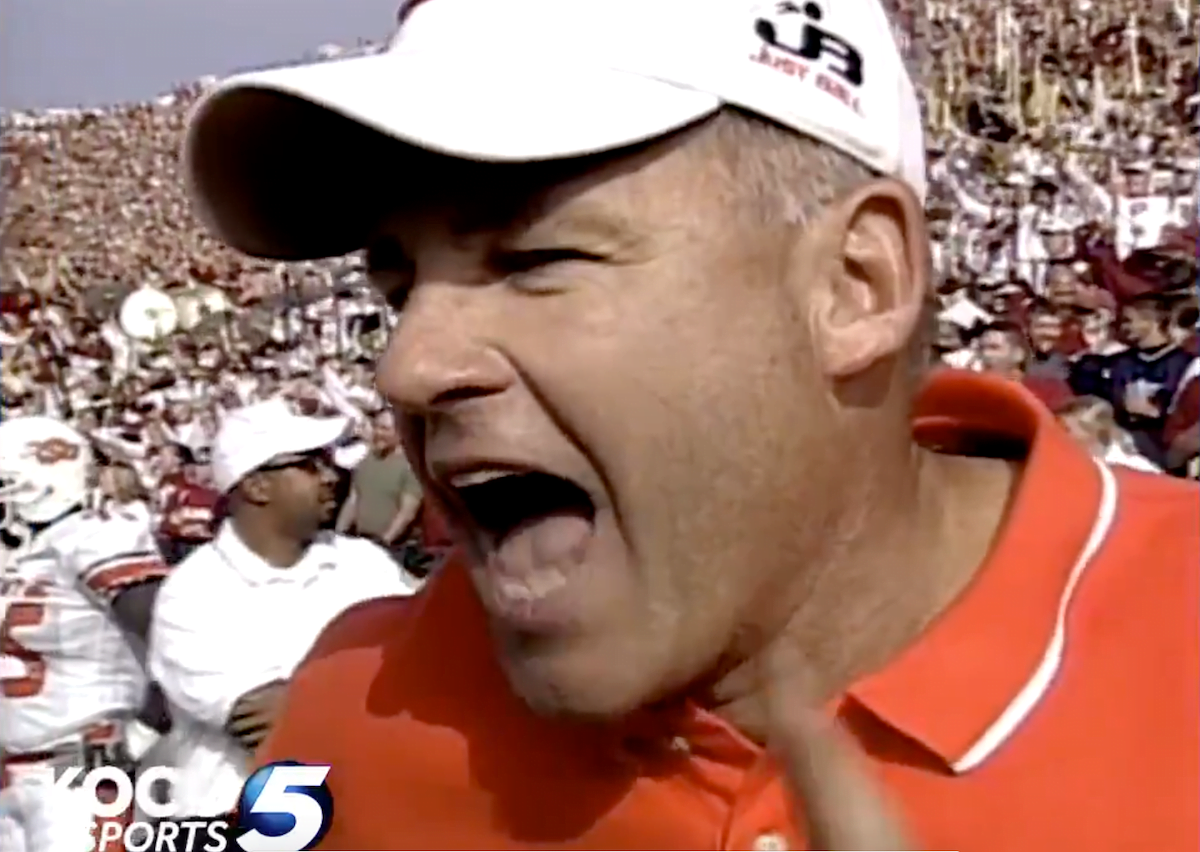 As Oklahoma State heads to Lawrence to take on Kansas and coach Les Miles, it’s impossible not to feel a bit nostalgic.

The Les Miles era at OSU was nearly two decades ago, but it feels like yesterday. And reflecting on his time in Stillwater, it’s plausible the golden era of the Gundy days may never have happened if not for him.

So let’s lean into the nolstagia, shall we? I’ve gathered up some of his best moments — some individual moments, some games, some more broad memories — from his time at OSU.

In his first season at the helm of the OSU program, Les Miles’ Cowboys were a dreadful 4-7 — a mere one-win improvement on the final year of the Bob Simmons era. But, ultimately, he won the big one, capping off the year with a 16-13 road win over then-No. 4 Oklahoma and spoiling OU’s Big 12 title hopes in the process. It was fantastic. (The Oklahoman once deemed this game as No. 1 on the all-time list of worst OU losses.)

Let there be no doubt: the famous “Let ‘er rip” audio — which Les Miles let out ahead of Bedlam in 2003 — was the most memorable individual moment of his career. It embodied the spunk he carried with him, and the team took on that moxie. (Alas, OSU lost 52-9 to the Sooners a few moments after this.)

It feels a bit pathetic to list almost all OU-related memories, but Les Miles was a wizard against the in-state Sooners. He went 2-2 against them, with his last win over them, in 2002, being one of the most thrilling. The 38-28 win in Stillwater was part of an 8-5 campaign in his second season as coach, and it established OSU as a real, legitimate rising program.

OU was ranked No. 3 at the time with a 10-1 overall record entering the game, with national title hopes still hanging in the balance until OSU did them in.

If you’re a #young like myself, it’s hard to remember a time when OSU football wasn’t great. That’s a credit to what T. Boone Pickens, Mike Gundy and Mike Holder have built the last two decades.

But in the late 1990s, things were … not swell. Not swell at all. The Pokes won the Holiday Bowl in 1988 — during Barry Sanders’s Heisman season — but then went more than a decade before another bowl victory.

Miles ended that drought, making a bowl in his second season in 2002 and winning the Houston Bowl. It was OSU’s first bowl win since 1988 and just second bowl appearance since 1988 overall.

Les Miles was recognized as the Associated Press Big 12 Coach of the Year in 2002 for turning around a losing Oklahoma State team into an 8-5 program, edging out Bill Snyder and his 11-win Kansas State Wildcats. It elevated OSU’s profile nationally, that season. But it also boosted Miles’ status as well. He left for LSU in 2005, but only after posting 16 wins over the course of the next two (2003 and 2004) seasons.