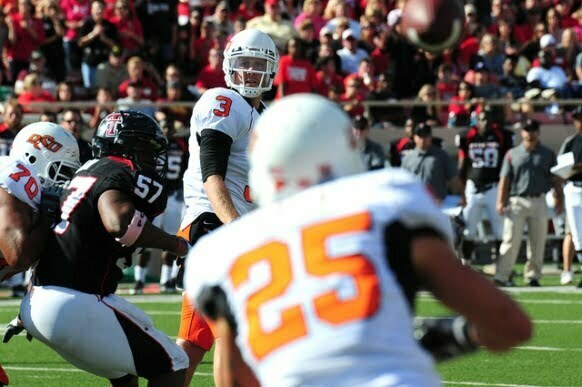 Amilian's second round pick stares down his target

I’m generally bored by Heisman previews because you can basically mad lib them every year.

Case in point. [Quarterback for the AP #1 team] looks to be the front runner for the Heisman trophy this season but look out for [exciting RB from a top 5 team] and [best QB in the country as long as his team is in the top 25]. [defensive player from a top 10 team who has no chance] could be a dark horse this season if his team goes undefeated and don’t forget about [WR from a top 20 team] if he gets a chance to return punts and kicks!!

I mean that’s pretty much the formula, no? So we decided to do something a little different this year.

I gathered a few PFB contributors (Q, Nolo, and Amilian (or FreeMason10)) together and we had a fantasy Heisman draft via email with the winner (writer who has the correct Heisman winner) getting a blown-up Sports Illustrated cover of his choice for Christmas from the other three guys. If none of us has the winner on our “team” then we’ll go to most Heisman votes.

On to the draft!

Nolo: “Somebody convince them to re-instate astroturf in Palo Alto. Sorry guys, first day at the new office. I was too nervous to have lengthy discussions about Heisman contenders. I’ll take Sam Bradford unless somebody already picked him up. In which case I’ll go with Jason White. If he’s not available I guess I’ll settle for LaMichael James.” 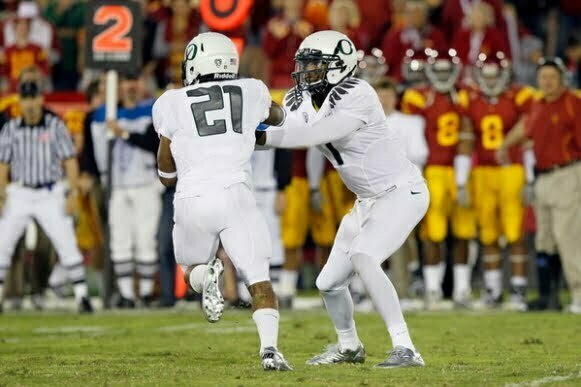 Nolo is banking on two guys who weigh a combined 295 lbs.

Pistolsguy: “I’ll take Kellen Moore, mostly so I won’t be faced with the unseemly conundrum of having to root for Landry Jones. As if I needed another reason to pull for Boise State. And maybe this year his kicker won’t Blake Gideon him in the last game of the regular season. Also I’m very aware that Georgia is revealing some super secret uniforms in the Georgia Dome against them a few weeks from now and this whole thing could go careening off the tracks before it even really gets started.”

Q: “UGA has new uniforms? When are you releasing the pictures, Kyle? :)”

Nolo: “I bet the UGA unis are like gray with red pants and maybe with some sort of special helmet. Either way they aren’t going to suck. I want to go back to Athens.” PG: “I want to go back in time and go to school in Athens.”

Editor’s note: this was before we found out they looked like this.

Nolo: “I’m with you Kyle. We all could have killed it in Athens. Right now you’d be 6 months deep into BulldogBlog.com and still drooling over Henley’s performance in the US Open. Pug intended.”

Amilian (FreeMason10): “Freak, I open up gmail when I stop for lunch and am bombarded. Been driving for several hours. 1st pick – Trent Richardson. 2nd pick to come in a sec. Trying to talk myself out of Landry… 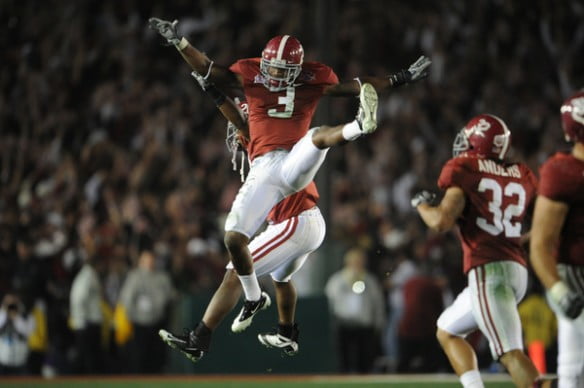 Amilian's 1st round pick trying to injure himself...

Round 2
(2 minutes later) Amilian: “Screw it. Give me Weeden. I know one of you will take him before it gets back around to me. I want him on my team. I’m all in.”

Q: “I’m glad I didn’t have to make that decision, because it would have been tough for me to pass him up with two picks at 8 and 9. I’m pretty much putting all my eggs in Andrew Luck’s huge hands at this point. Seriously, have you seen how big his hands are. It looks like me when I hold a toddler’s football.

Nolo: “So it looks relatively normal?”

Q: “Maybe instead of taking veiled shots at the size of my hands, Nolan could make a freakin pick.”

Nolo: “I’ll take Marcus Lattimore just so I don’t put all my eggs in one basket and cover them with 2 Ducks. It’s gonna be a big year for Stephen Garcia, Marcus Lattimore, and The Ole’ Ball Coach. By the way, can we come up with some sort of nickname for Garcia? Dirty Sanchez for Mark Sanchez was pretty good, but Garcia is way dirtier.” 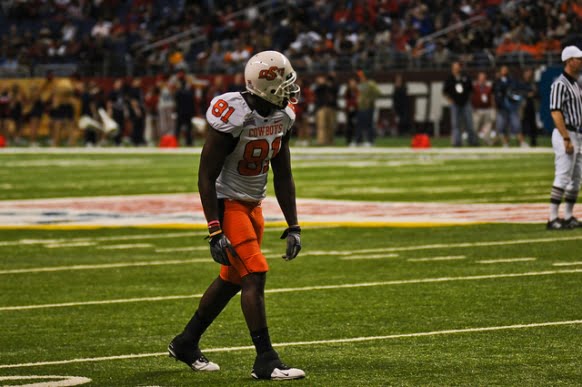 Nolo: “Time for my patented ‘screw it’ pick. Darren Thomas. I’d like to point out that there is only one team besides Oregon that has 2 players taken (Oklahoma State). Yes we’re homers but it’s not even really a stretch.”

Amilian: “Great point. Kyle is going to take my pick…”

PG: “LET’S GET DENARDED IN HERE!!! Does Q know that Geno Smith is 90-1 to win this thing? Also, has anyone ever given a rational explanation as to why RGIII’s odd to win it are twice as good as Weeden’s? 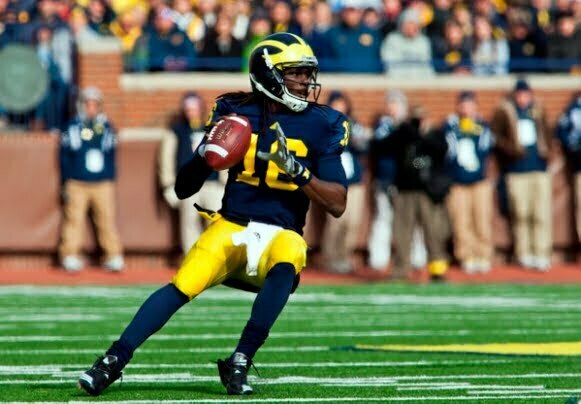 Q: “What were Cam’s odds last year? I’m just saying…you pretty much have to be in a BCS game to have a legit chance of winning. I don’t think Denard is winning it on an 8-4 Michigan team. If Dana gets WVU to run the table and Geno puts up numbers, who knows. I would maybe wager my vehicle that Denard doesn’t win it.”

Amilian: “Well I’m not as mad about you taking Denard as you were about me taking Weeden. But that was my pick. Don’t underestimate ANY quarterback in Holgy’s offense! I want to take the next best RB and QB. Looking at the odds, I would end up with RGIII. Seriously, he plays for BAYLOR!!! I’d take Dayne Crist before him. And I’m about to base my next pick off the same source that put Griffin at 20-1. I’ll go Knile Davis – Arkansas RB”

Nolo: “It’s never good when you have to specify the position of one of your picks and what school he goes to…”

Editor’s note: we let Amilian replace Davis with Aaron Murray after Davis went down for the year. Q said “Fine with me. If Aaron Murray wins I’ll personally buy you an SI cover.” I think we’re good here.

Round 4
Amilian: “Even though I think Kyle can throw a better ball than Taylor Martinez, I’ll take him. They can win enough games in a conference with plenty of publicity for him to get the attention he needs.”

PG: “I’ll go Dayne Crist. I mean touchdown Jesus is on your side when your name is Dayne Crist, no? Anybody down for Dan Persa or RGIII? They’re the only two left that have a formal Heisman campaign already launched.”

Editor’s note: this was before we knew he may or may not even be starting this year…

Nolo: “I didn’t get it either. Maybe Crist intercepted it. I’m pretty sure he’s monitoring this draft. Crist is always watching over us. I’ll take Ryan Tannehill. Gig ‘em.” 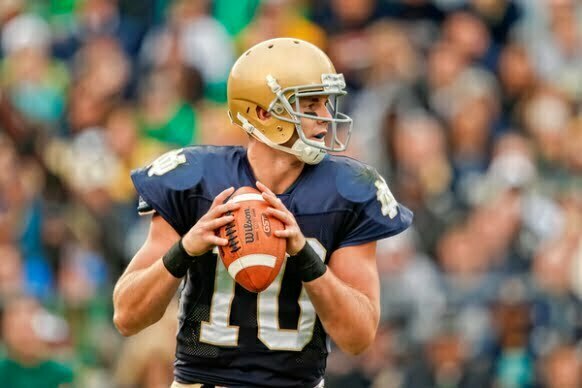 At least he's for sure starting...we think

Round 5
Q: “With my fifth I’ll take James White…go Badgers.”

Nolo: “Anyone else think it’s funny that Kyle can’t even type an email about Crist without it getting intercepted?”

Nolo: “I would take Matt Barkley right here if they were allowed to play in the postseason. I’ll take John Clay instead.”

PG: “John Clay, huh? So that means you guys have taken more people from the Wisconsin backfield this round than from the Big East and ACC combined in the entire draft. I’ll go E.J. Manuel – that should make me the early front-runner after he takes the Jacory Harris memorial “African-American quarterback from the state of Florida is being declared the Heisman winner after the month of September” reins four weeks into the season.”

Nolo: “Crap. Any way I can change that pick to Jacory Harris?”

PG: “You almost took Justin Gilbert in a Heisman race? Are we trying to destroy every shred of credibility we have left?!”

Here’s a recap of the teams.

We’ll revisit this post in December to see who won and who had the worst team.

Which squad are you guys betting on will contain the Heisman winner?