1. Great story from Chatmon on how Gundy almost played for OU – [Pat Jones said], “He went to Norman to visit, then word got out that he committed to OU,” Jones said. “We got a hold of him, and he told us Coach (Barry) Switzer and a couple assistants got him in a

room and he realized he wasn’t going to get out until he told them he was going to come (to OU) or something to that effect.” Can you imagine if that happened in 2011? ESPN.com would go down in flames in a matter of seconds. (NewsOK)

2. Chatmon breaks down signing day – Love this work from BC on what OSU’s recruits mean in terms of what kind of offense and defense they’ll be running for the next few years. I also like the fact that OSU’s coaches aren’t arrogant enough to make their players adapt to a certain style. Rather they mold the playcalls to the talent they bring in. (NewsOK)

3. John Helsley says the Cowboys’ NCAA chances are on life support – “The inner dynamics of this squad are in flux as well, with Ford flipping through his roster in search of answers and unquestioned commitment. How else to read Ford’s rotation at Tech? Ray Penn, his starting point guard in 10 games, played less than a minute. Forward Matt Pilgrim, who finished last season on a promising high, was on the floor for three minutes as his alarming regression continues.” He’s right too. As he points out, the 2009 team was 3-6 in league play before rallying to make the dance, but that team was loaded with talent. This one? Not so much. (NewsOK)

4. Jimmie Tramel with an interesting JPO interview – There’s a great story in here about how JPO wanted to go at James Anderson every day in practice. You have to love that from somebody who’s going to potentially be a team leader for the next three years. (Tulsa World)

5. Samuel Bryant on what’s wrong with the team – Some solid points in here, especially about how nobody on OSU has a true position and Gulley’s injury. The position thing is killing them I think. Markel isn’t a one, neither is Keiton, and apparently Ford doesn’t think Penn is either. Moses and Darrell don’t really have true positions either. (CowboysRFF)

A cartoon from the O’Colly after the plane crash in 2001. 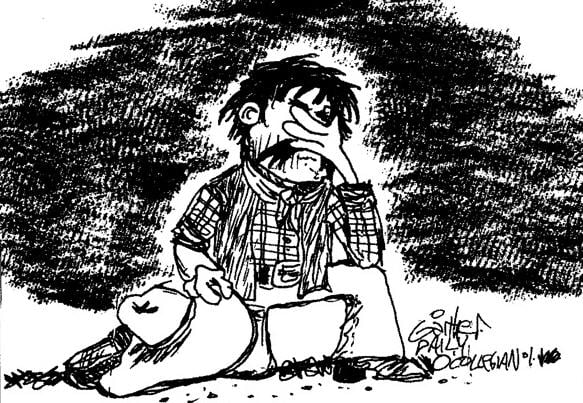 “He just kept getting closer and closer to the bucket. I didn’t know, is he going to dish it off? Is he going to shoot it? He got into his shot and my first instinct was, ‘Hey, he’s 5-9, so I’ve got to block this.'” – Mike Singletary (LubbockOnline)

A&M and Texas going at it in College Station on Big Monday. If you don’t have TV, catch it online at ESPN3.

Back this afternoon with out first Big 12 hoops power rankings!