Quick reminder to those not currently following me on Twitter: I’m randomly giving away 2 NCAA golf championship tickets to one of my followers once I reach 500. If you don’t follow you can do so here.

A bunch of guys debate whether or not Blackmon will lead the nation in receiving again this year. (Rivals)

The top offensive trio in college football is held by none other than your…Texas A&M Aggies? Tannehill + Gray + Fuller > Weeden + Randle + Blackmon? And for that matter why is Ohio State #2? The receiver on their list has career number that are worse than Blackmon’s 2010 numbers. (Rivals)

I love this from Jeremy Smith – on becoming one of the best 1-2 punches in the nation – “We talk about it all the time, when it happens, you’ll see. And it will happen.” (NewsOK)

Good stuff here from Ubbs on offensive and defensive efficiency and how it affects OSU. (ESPN)

The Cowgirl softball team advanced in some thrilling games against the #14 overall seed, Tennessee. They’ll now play a 3-gamer with UH (who dropped #3 overall seed, Texas) to go to the WCWS. (okstate.com)

Bo Van Pelt with a nice little O-State shout out on Sunday after finishing 3rd at The Colonial in Ft. Worth. (Star-Telegram)

This is on the front of the NCAA’s NCAA golf championship home page. My question: did Stillwater get about 15 high rises since I last lived there two years ago or what? 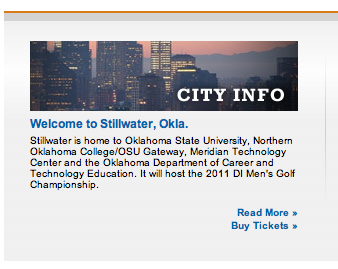 I’m trying not to be hyperbolic here but the end of this video is literally one of the coolest things I’ve ever seen on YouTube.