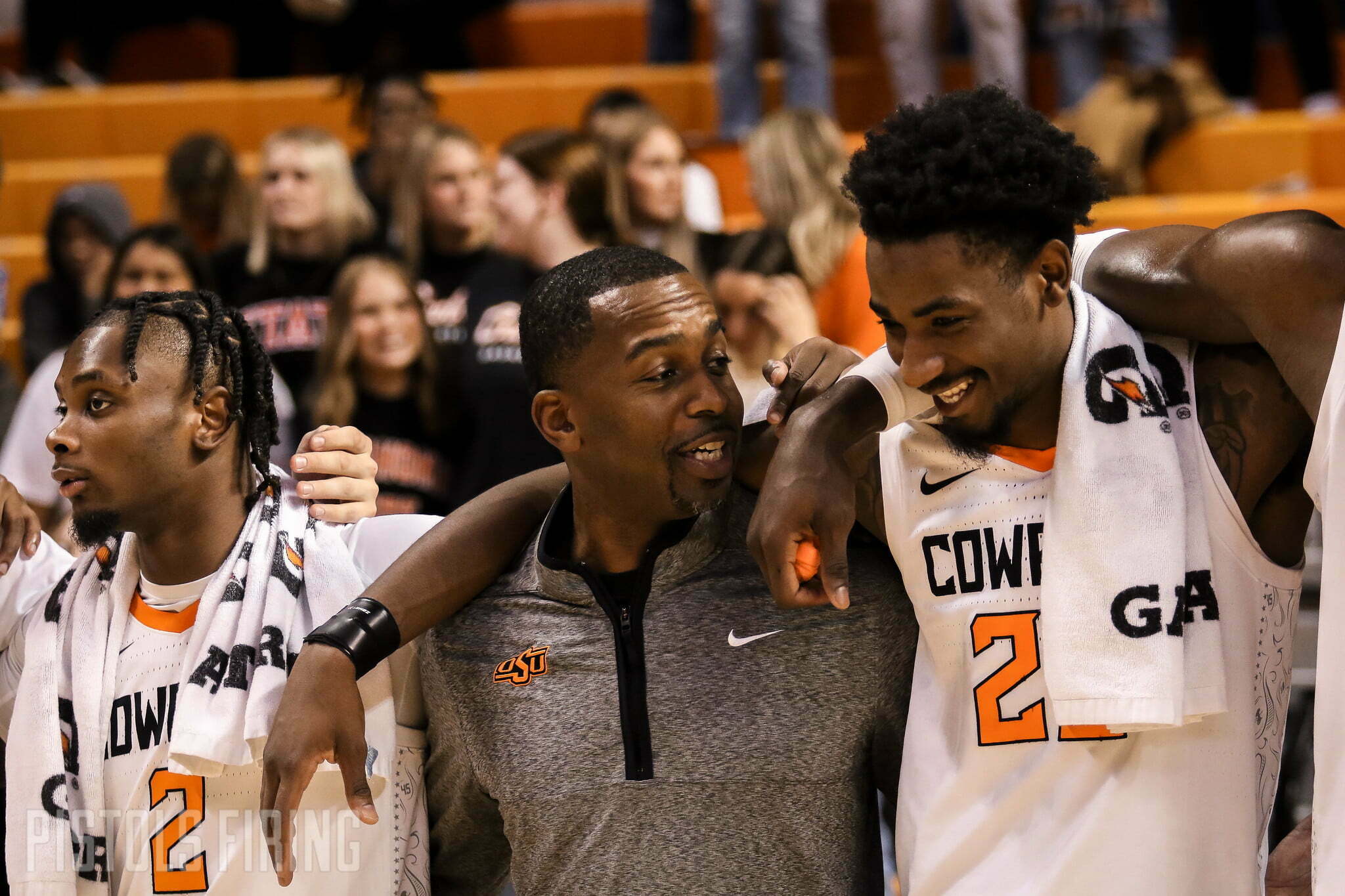 “It’s not often when you’re at a place like this you get a Quad 1 opportunity in December, but that’s a pretty damn good basketball team. They’re going to win a lot of games. Obviously, they’ve shown they can go in places like this and win. Thankful that our guys stuck with our gameplan and were able to come out with a win that I think will carry them for a while.”

“It was a … I don’t want to say must win; they’re all must-wins for me. But it was a game that there’s value there. A win is significant. I don’t know if [Sam Houston] will be seven [in the NET] at the end, but they’re where they are for a reason because they earned it. They play well. They’ve gone on the road and beat people. Coming into the game, they expected, I’m sure, to play well. And we had to well to make sure that they didn’t play their best, and I think our guys accepted the challenge.”

On a sense of urgency in the second half

“I mean, yeah, there’s always a sense of urgency. But I thought we got away from what got us the lead, more so than anything. You know, we only had four turnovers in the first half and then we had six in the first five minutes in the second half. And part of it is you give them credit. Because I’ve been on the other side. When we were at Stephen F. (Austin), we played a style similarly, that was just over the top physical everywhere you turn. There was a hand on you, body on you, and probably foul so much that the officials couldn’t call them all. You frustrate a team like us that’s used to being able to run their offense a little bit more flowing. But that gives them a chance. And so that’s the way they want to try to muddy it up a little bit because I’m sure they didn’t think that they could just line up and just play straight up against us athlete for athlete. So the urgency is always there, but I just knew that the mindset was of that team. You know, you can go 3-0 in your games like this with a team like that, you feel pretty darn good about how your season will finish.”

“I think he’s playing at a All-American level — I really do. The impact that he’s having on our defense, you just can’t good shots when he’s in there. He’s not blocking 10 or 11 of them, but guys are going in there looking for him now and not necessarily taking shots they normally would take. And then obviously the way he is rebounding the ball, gives him a chance to really make a big, big difference as we move forward to playing against Big 12 teams. In a game you win by 14 to be +20 is significant when you don’t score a lot of points.”

On what he liked about Oklahoma State’s defensive performance

“I’ve liked our defense pretty much every game we’ve played in all honesty. I think we have an elite-level defense, top 10-ish, maybe. I don’t know what the numbers say at this point. But I think we’ll be trending in that direction. And as we get more reps together, that’ll be even more significant. But the connectivity was there. It started with us being able to kind of bottle up their guards and not give them great looks. And then just following those guys into the lane and making their man have to decide whether they wanted to take a bunch of 3s, which obviously we defended those well, as well.

On how far Bryce Thompson has come as a defender

‘Lightyears — he’s a different player from a defensive standpoint from the time we got him. I think I was teaching him how to spell the word when he first got here last year. I think he thought it started with an O. He’s bought in. He’s coachable.

“I told him for a guy who scores the ball well and has been struggling from 3, I can’t fathom how you could go 4-for-5 from 3 and end up with six 3s taken in a game. I wasn’t allowed to shoot five 3s in a game. That’s why I didn’t have that many opportunities, but if I made four, I would have at least got to 10. Even if you go 4-for-10, it’s still a pretty good percentage. That’s the next area is just having him be comfortable shooting open 3s, which will give him a better opportunity to then use what he’s liked most — guys will have to close out on him and he can drive. But then his defense has come night-and-day far.”

“I’d like for them to be more aware. Well, it’s two-fold. I don’t know that they know what it means. There may be some of us still trying to figure out how you calculate it, right? But the truth is it’s relevant. It matters to what we’re trying to accomplish as a team, so I do want them to have some awareness that this isn’t some team that’s ranked in the 300s. This is a game that if they continue to do well as we turn into league play, maybe [Sam Houston] will drop into the 20s, but it’ll still be a very significant win for us moving forward.”

On what he learned about his team at UConn

“That Moussa (Cisse) is really, really important to us. Again, I talk about his defensive presence, when he goes out of the game I think (Adama) Sanogo maybe scored like the next 10 points, and they were all right at the rim. You give up 48 in a half, and then obviously he comes in and I think he grabbed like the first six rebounds of the second half by himself. So, that’s probably the thing, because it was so obvious. I mean, he went out in the first minute and a half of the game. The tide was pretty much turning at that point, but we fought, which gave me an opportunity to tell our guys we could find a way. And it happened today. There’s a four to five-minute segment of every game when we kind of lose our minds. We can shore that up, we can take the next step to becoming a team that’s nationally relevant.

“So the thought goes both ways. We kind of got to this last year and I’m kicking myself. Whenever he would get a foul like the first possession, we’d take him out of the game, toward the end of last year. Because then you get a few possessions without having to worry about it. And then the game loosens up a little bit. So there was that thought initially that we should have taken him out after the very first one. Because he got them on back-to-back possessions. But then when you get two and they go on a 10-0 run, then you’re thinking should we put him back in? Well, you can’t foul him out yourself. But you can’t not have a chance to win the game. You know, you want to be able to hold the line. Twenty minutes is a lot of time. So we could get to the half and it was 17, hopefully maybe it’s less than 10, then you give yourself a chance. But a lot of those thoughts go through my mind.”

On if he has a conversation with Moussa Cisse about fouls

“It’s natural, and again, the reason I was kicking myself is because I know the competitor he is and obviously the talk of the matchup between the two. So really both fouls were kind of just — I don’t want to say reckless, but they were both really unnecessary. Pushing him in the back on the first one. It was kind of one of those where you hope the officials say, ‘Hey, knock that off.’ Let the two big guys know that you’re watching them. And then the second one, just can’t defend. Grabbed the guy in transition. But he was just so amped for that matchup knowing how well (Adama) Sanogo had been playing, and he was just probably over-excited. Just talked about, when that happens — because it’ll happen again, there’s good big guys as we move forward in our league — he’s got to have fun. Compete, but don’t overdo it.”

“I need to watch the tape on that. I’m going to have our video guy pull them all. I don’t know that it’s happened, you know, at least once in the last three or four games for sure. So I got to figure out if there’s something we’re not teaching them well enough. Certainly, they were all good calls I would imagine.”

“Yeah, I mean, again, we talked about it before. You always have to be careful with your word choice when you’re a coach, but I told him that there may be an opportunity because of the way they play. They really sink in. And you know, people haven’t shown that they’re going to respect him and [Kalib Boone] out there right now. So I told him, you might have to shoot two 3s. Sure enough, there you go. He was going to shoot them I guess and make sure I knew he heard me. But no, he works on it and he’s confident in it. And it can add a different element if we can get him or [Boone] to be respected out there because that’ll open up the floor for more drives and maybe more lob opportunities or post-ups for Moussa (Cisse.)”

“So we took all the starters out. The thing I liked, because I didn’t talk to them. I was kind of frustrated because we were just being careless. But I walked past them and heard them talking to each other about playing better, taking ownership of their play. When they all got back in there we were able to settle things down and put ourselves in a good position.”

On taking less shot attempts in the second half

“They kind of make you do that? You gotta kind of slow down and get your screens set better, cut harder and get the ball for sure from A to B because they do deny and make it hard on you. So they kind of force you to slow down, which is kind of the point of that. You either speed up, which is not the right thing, which is what we did to start the second half, or you slow down and really kind of be more deliberate about running your offense.”

On getting Woody Newton back on the court

“I feel bad, I probably kind of put him in a tough spot to throw him in there in that situation where the house is on fire a little bit. And I didn’t send him in there probably equipped with the right fire extinguisher. Had Chris (Harris Jr.) playing point. Just all of it. But it was good to at least get him on the court again, and I told him that. So hopefully we can all get better as we move forward because obviously the next game is going to be a challenge for them.”