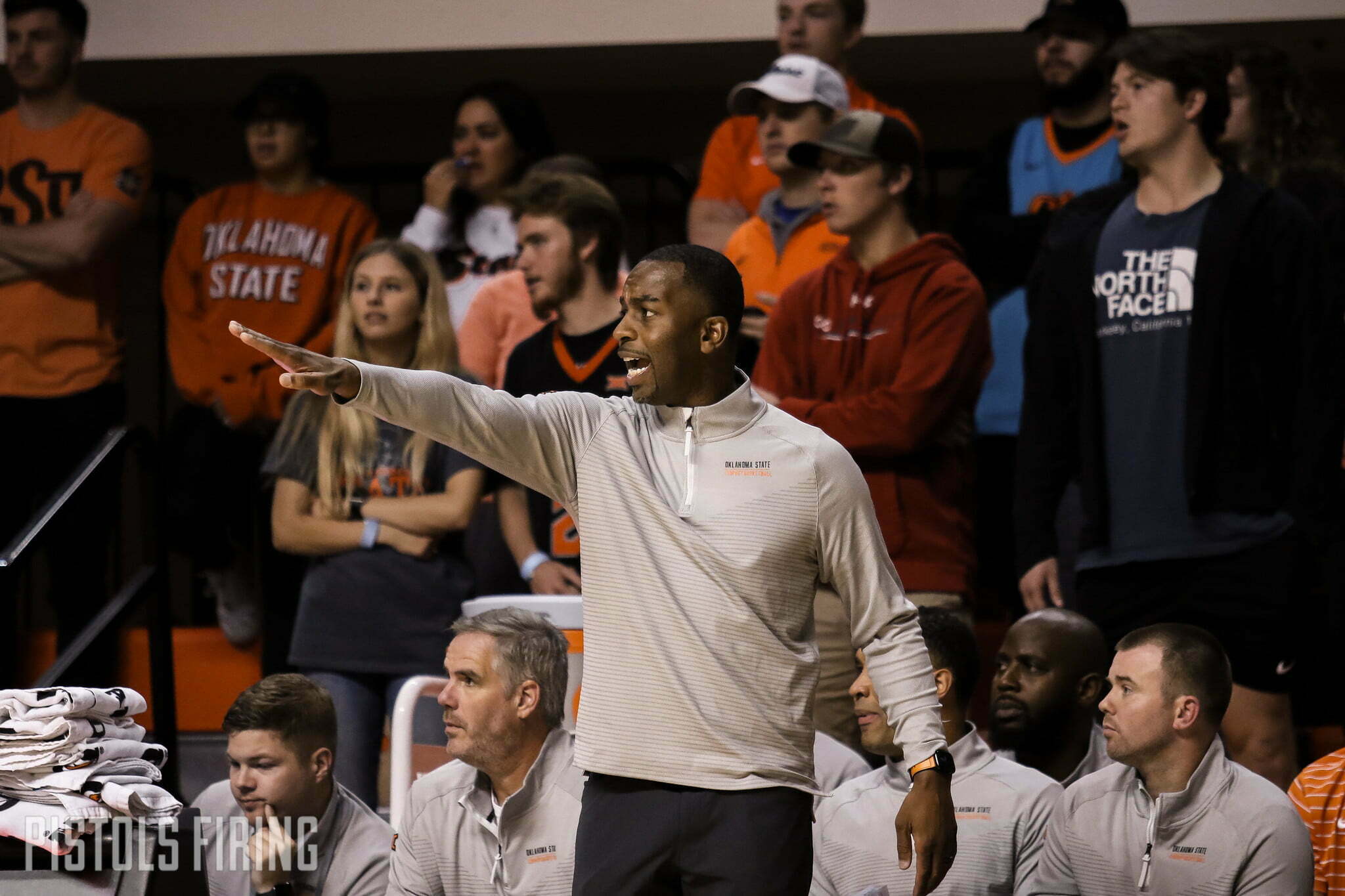 STILLWATER — For the first time this season (and earlier than most expected), Mike Boynton addressed the media after a loss.

Oklahoma State fell to Southern Illinois 61-60 on Thursday in Gallagher-Iba Arena. Here is everything Boynton said after the loss.

“Disappointing, certainly, ending to the game. Frustrating that we didn’t execute better offensively down the stretch, because, you know, for most of the game our defense was so good. Let me take a step back, first, Southern Illinois is a good team and I think they’re gonna win a lot of games. So, I want to give them credit for not losing their composure when we built a double-digit lead in the second half, and even when we made a run there and our crowd got into it, you know, just kind of keeping their composure and doing what they do. And at the end of the day, their two best players really led them in a way that gave them a chance. And, you know, for us, it was a lot of self-inflicted wounds, if you will. Not to take anything away from them, but they had nothing to do with us missing free throws, for instance, or even our late turnovers there. So, disappointing, but I’ll tell you what I shared with my team. You know, this is a great opportunity if used the right way for us to grow. We’re going to see teams, more athletic, but certainly as physical and as tough as they were defensively. This can be an opportunity for us to get better and learn how to play through those moments where late in the second half we got to execute a little bit better on the offensive end.”

“We play a long season. So, there’s a lot out there for this team to still accomplish. So, a few things can happen, though. They could start to point the finger, which you certainly hope wouldn’t happen this early. You’d hope we start looking internally and try to figure out ways to help each other more. But certainly, there’s an opportunity here for us to get better. We’ve got several games left for us to get better and learn. This could be one of those moments that’s a critical point for us moving forward.”

“Yeah, I mean, we got a couple of mid-range jump shots from Avery (Anderson), and [Bryce Thompson], even the last one was the shot that I’ve seen him make thousands of times. Little frustrated we didn’t execute the play to throw Kalib (Boone) the ball there. I thought John-Michael (Wright) took one dribble too deep and lost kind of his vision and angle to throw the ball there on that last turnover. But I don’t think we took any bad shots. You know, it’s really more — I mean we got an opportunity to really put real pressure on them if you make your free throws. I mean, that was a big, big point there. If you keep it a two-, three-possession game instead of it going down to one and they got real confidence that they don’t have to make that many plays. And obviously they executed late and made some big shots. So you gotta give them credit on their end.”

“I don’t want to pretend like I’m some free-throw shooting expert, but I think we got good guys shooting. It’s been an issue for Moussa for most of his career. He’s getting better there. Bryce and him were the only ones that missed, so it really wasn’t a big team issue. It was just those were the guys at the line in those critical moments. The challenge you got if Moussa’s not in the game, he’s not rebounding and protecting the rim defensively. The second time he got fouled was on the rebound. Instead of it going to a 4-point game, it stayed at a 2-point game there because he missed both. Just gotta keep working at it. I’ve seen them make them in practice. We shoot them every day, and they’ve got to ultimately have confidence that they can step up there and make them when they count.”

“It wasn’t necessarily a play design, we were just trying to get down to court and execute something pretty quick. He got the rebound and went, and as far as I can remember, the clock was running down, the broken floor, you got the ball in the hands of a really good player, you just got to let him make a decision in that situation. So, wasn’t really a designed play in that situation, because I’m pretty sure it was off a missed free throw on the last one. He got the rebound, so you don’t necessarily have a whole lot of time to set up, because you’re down and you got to go. I thought the shot he took was one that I have confidence in him making.”

“Yeah, I mean, we got enough guys in our locker room who’ve been through this, who lived through this. You know, very similar to our game at home against Oakland, second game of the year last year. We built a lead and for the most part out-played the other team, we just didn’t make enough plays late to finish. There’s a process to learn how to win. And these guys have to learn how to win together. I was disappointed, I didn’t think we stuck together and executed as well as a unit late in the game, and that’s something that’s on me to get corrected.

On how to avoid letting these late-game collapses happen

“Again, I really believe this, and I don’t want to take any credit — if we make our free throws, I think it’s a different deal. I really, really believe that. Because, again, it goes to multiple possessions that they gotta deal with. We were playing pretty good defense. So, I don’t think it’s the same. It’s a similar situation, but I feel like this team is much more equipped to handle it moving forward. And tonight may be a lesson for the guys who weren’t here that, ‘Hey, we got to tighten up, especially late in the game.’ And  I feel like we should have been able to extend it from 13 (points) to 15, 16 and put real pressure. We just got to get better.”

On how he addressed turnover issues in the first half

“We just talked about at halftime, just you know, cutting harder and being more ball conscious. Because they are a team that switches a lot. So, they’re able to more easily run through passing lanes and cause deflections. They’re a physical defensive team, but we gotta get used to that. That’s the whole Big 12 with bigger athletes across the board. And so, we just got to get better. We got to come back to practice [Friday] with a growth mindset and really take it upon ourselves to take responsibility for what happened today. Get better and go get ready to play another really good team, this time on the road.”

On whether Southern Illinois’ perimeter offense is tough to defend

“Yeah, and you know, obviously with the way we’re playing with the two bigs, they were trying to draw both of them away from the basket. And they weren’t as successful early, but as the game wore on, again, that’s the point of an older team, who’s been there before. This team went to Colorado and beat ’em last year. They had some good moments during their season last season, and a lot of those guys returned. So they’ve been in moments against big teams. They didn’t get away from who they are and what they do. They stuck with it and they made some big plays and big shots down the stretch. Again, that’s why the credit goes to them, because it would be easy for them to kind of say, ‘Alright, we’re on the road, this one’s (over), we’ll go get the next one.’ But they had the attitude that they were going to keep playing and believing in what they do. And it worked out for them.”

“He’s a good player, but I thought we gave him too many angles to really drive down the lane, which forced help, which gave him opportunities to kick out on the backside and that’s where a lot of the 3s came from. A big part of our game plan was to contain the ball, stay in front of him, wall up and then make them score over top of us rather than with us in rotation. But, they did a good job of not falling into that. They stuck with it. He got more aggressive as the game went along, and he made some big plays, getting in lane and then getting some great shots for his team.”

“I try not to predict numbers. The other team is going to have a gameplan. He had five rebounds the other day, but we offset that with, I think it was 23 with three other starters in Kalib, Bryce and Avery. Tonight, he was very, very aggressive and assertive. The free-throw thing, it’ll get there for him. I thought it was very effective. He played a very good game. The free throws are something we just have to continue to build his confidence in, but I think he’s the type of player that could be a consistent threat in there. It’s not like he took 20 shots. He was efficient and kinda slowed down there in the second half and made some really good plays.”

On whether Kalib Boone needed to be more aggressive

“I mean, they were just really physical, and just playing underneath him. It was part of the game plan, was to try to play through him. I thought he would have a big, big advantage especially as a four against a team that is already small at the five. But he just couldn’t get great angles and was kind of getting off balance. It’s just something we gotta keep working at with him.”