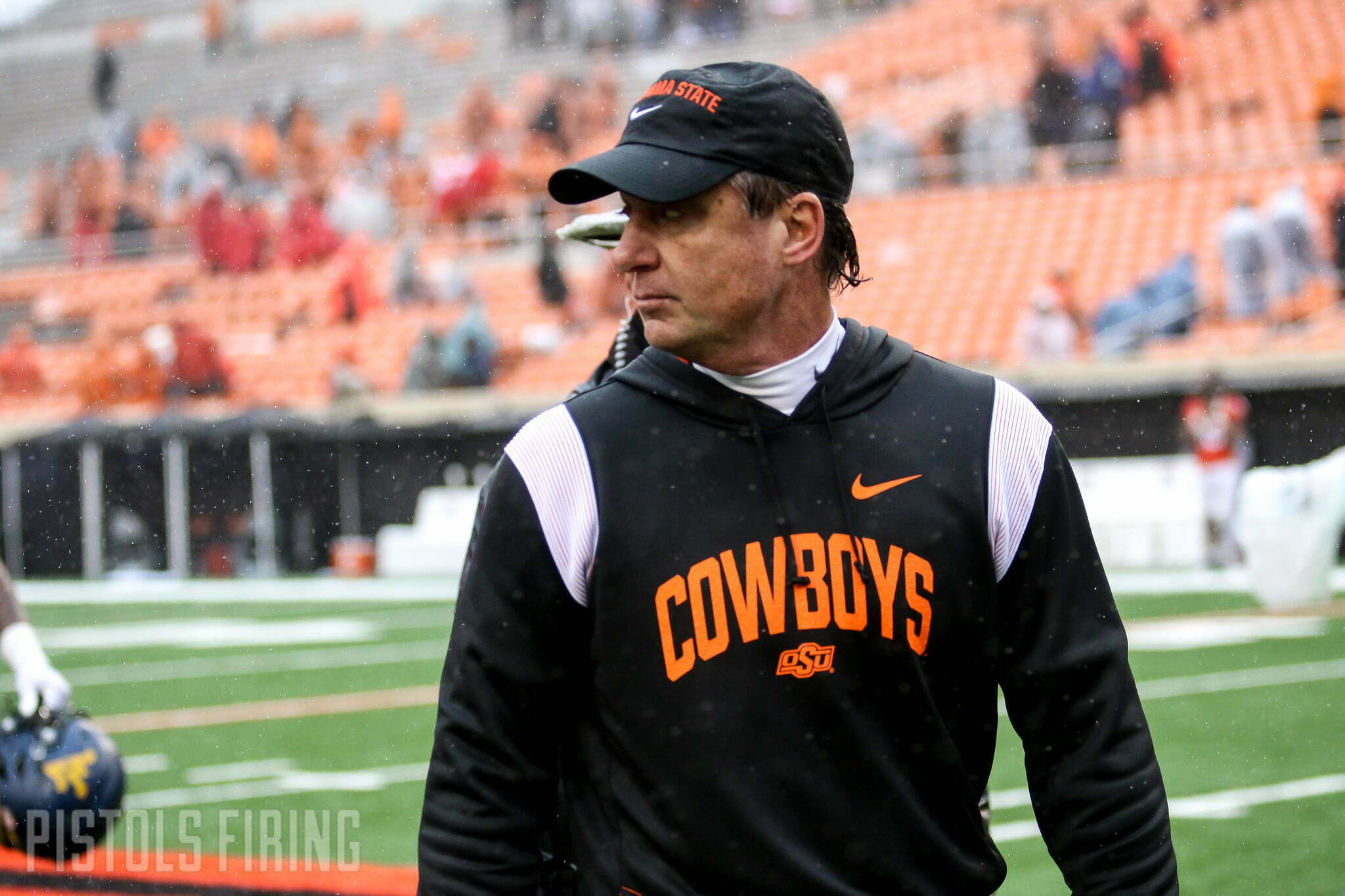 Oklahoma State will play Wisconsin in the Guaranteed Rate Bowl on Dec. 27 in Phoenix. The bowl held an announcement news conference via Zoom on Sunday evening. Here is everything OSU’s coach had to say.

“Well, we are excited about being in the Guaranteed Rate Bowl. Found out at practice today. We love Arizona. Great place to be during this time of year. So we’re looking forward to a great game versus Wisconsin. A very tradition-rich football school that I’ve always watched, and not been around much, obviously, with them being up north and being in the other conference.

On not knowing which bowl OSU was going to

“We didn’t have any idea. In fact, the time I found out, about 2:30 or whatever, we were already into practice. And so we’re thrilled to be going out to Arizona again. We had a good practice today. The guys are out, running around, and got them back after a week off. So we’re back at it.

“Right in the middle of recruiting and official visits and bowl preparation the next three weeks. It is the
busiest time of year for us as coaches and players.”

On leaving for the bowl on signing day

Yes, we will keep our bowl routine the same that we’ve had for 17 years. We always go out. The first night we are in Arizona will be a Sunday night. We’ll work our way up to what will be the Saturday game, which will be — I think it’s on a Tuesday.

“We’ll just work our way backwards. I think it ends up being the 21st. And we have been very comfortable with our bowl game routine for, as I said, 17 years now. So there’s not any reason for us to change it at this time.”

On whether players in the portal will be allowed to play

“We’re going to look and see where we are at and see what we are dealing with. When you look at our team right now from a health standpoint, we have to be a little careful about what we are going to do or not do, because we need enough healthy guys to practice over the next three weeks, and then obviously get out there and play a good, competitive game. So we will have to see with what we are faced over the next couple of days.

“The portal, I think, opens tomorrow. We would like to think by Tuesday evening, you would know who
is in the portal and who is not. That will give us a better idea of what we are dealing with at that time.”

On Spencer Sanders’ availability for the bowl game

“I think Spencer is doing really well. Obviously much better than he was two weeks ago. It’s not an injury that we examine. It’s just a ‘how do you feel’ injury. My personal opinion is I can’t imagine he won’t feel good in even another week. As that tissue starts to — the trauma in that tissue starts to go down and scar up a little bit, you feel better and better every day. And I would expect him to feel really good in another week.”

On the importance of bowl practice for young players

“Well, these practices for a bowl game are important. This is something that I’ve discussed for 17 years now, and the fact that this allows us to have 14 practices, which is essentially a spring ball. And to a certain extent, based on the practices we are allowed to have, it’s actually, in my opinion, better than spring bowl. Now, we don’t have any JUCOs or transfers or any of the incoming freshmen, but for the players that are on our team, they are going to get an additional 14 practices, which can only help our team.”

“Well, the numbers game is difficult in general. And so we’ve had a lot of discussions about this. There’s players moving around. It’s all over the country. We never know what we’re dealing with until, like I said, middle of this week. We should have a pretty good idea of where we are at. They have put certain guidelines on the portal, the windows, and that does help with roster management a little bit. But to the extent of how to prepare for the next year, how to keep your depth chart up to par, it’s extremely difficult. And being that sometimes you have surprises. When you have a surprise, you don’t really know it. It’s tough to go back and start re-recruiting, because recruiting is over. Signing date is on the 21st. The majority of the high school players, and really a large percentage of what would be transfers, by position, you have somewhat already recruited or you haven’t recruited. So if you get a number of surprises late, it could really throw you a curve ball.

“The one difficult position is the quarterback position, because they’re more active than any other position based on, in most cases, only one guy plays. So you see more activity there, and that is difficult. When [Guerin Emig] asked about Spencer, when you think about a guy like Spencer, an opportunity to go to the pros or come back, at some point, you would like to know where you are at based on do we need to add numbers or do we stay the course. It is one of the more challenging things we are doing right now, that

“I have shared this with you over the last couple months. There are new standards and regulations going in with the portal based on a player that goes in the portal, if he has multiyears. And what’s tied into him if you take a young man off the portal that has more than one year left.

“I think starting next year, that will reduce the numbers some, which will help with the consistency across college football. This year, I don’t know if there’s enough players who have been educated in that area to know exactly what they are getting into at this time.”

On why this game is important

“Well, every game we play is important. And I’ve always said this, we try to instill basic values and core principles in our team from day one. It doesn’t make a difference who we are playing, where we are playing, what the records are, we’re playing in a game. And so we all signed up for this. We have an obligation to compete, to prepare, to play the very best we can, coach the very best we can, put the best product on the field every game.

“This game is just as important as any other game. I’m not arguing the national stage of last year compared to whatever this is. This game is on TV. It’s at nighttime. A lot of people are going to see it. It’s in a great location. And it’s against a very well-known opponent. Wisconsin is very well-known traditionally football-wise. I think there will be a lot of exposure with this game. I haven’t met with the team really and gone into detail with this, but we’re expecting guys to practice and prepare for this game just like we did last year.”

“Oh, I think somewhat, just knowing who is there and who is not there. Obviously, that’s not a luxury we have right now. I’m guessing at some point we will.

“Coach [Luke] Fickell is a smart guy. He’s been tremendously successful. I’m sure at some point, he will decide what he wants to do, or whoever is calling the shots there. I guess it’s him. But he’s had tremendous success with what he’s done, and obviously been a head coach a while. So he’ll make those decisions. I don’t know that it’s something that will be secretive. I don’t know what advantage that would be.

“At this time, for Oklahoma State, over the next eight or nine practices, we will be concerned with ourselves and our offense and our special teams and our defense, and all the areas we need to improve. And we’ll sprinkle some of Wisconsin in based on what we see on tape, and that’s all we can go on at this time.

“And then at some point, the last six practices or so, probably have a pretty good idea maybe of what they are going to do, and then we’ll start to work in some more looks versus what we think Wisconsin will show up with out there in Arizona.”

On whether they’ll look at some Cincinnati tape

“We will look at both. We’ll look to see what carryover we have. Not that we would be 100% to try to see the possibility of schemes, concepts-wise, whoever he’s brought over. We have to do our homework on both sides. And then in most cases, you have to kind of take into account what is actually realistic. But I guess they can do whatever. I don’t know if he’s — I haven’t paid any attention to it.

“I mean, I didn’t even really know that he took the job, to be honest with you. So we would have to know: Did he bring his coordinators with him, not bring his coordinators? I don’t know. We’ll have to look at both and see what we do, and try to give ourselves the best chance to come up with what plan gives us the opportunity to practice what we think we’ll see on game day out there in Arizona.”