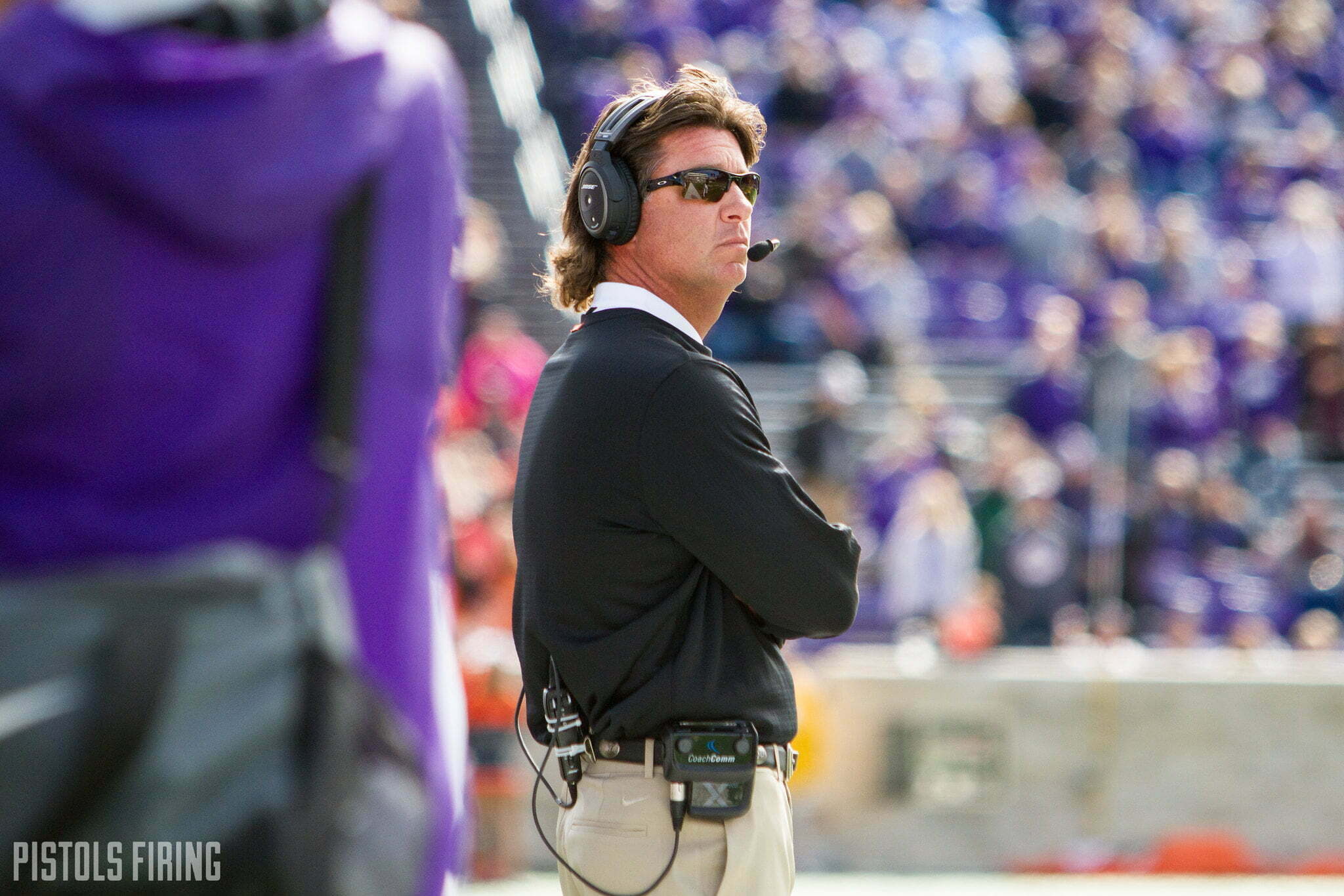 STILLWATER — Strap in, we have a long one.

Oklahoma State coach Mike Gundy went for about 35 minutes at his Monday media luncheon. He hit on everything from the fiasco that was the 2011 Tulsa game to his current team’s improvement. Here is a breakdown on all his talking points.

• He praised Tulsa’s defense, and said the Golden Hurricane have “put it together a little bit offensively.”

• He reiterated that OSU played flat in the first half against McNeese.

• Saturday’s game should be a “full house,” with a lot of OSU fans and alums being from Tulsa.

• The opposing defense dictates what his offense does in terms of running and passing. He calls it a numbers game. Gundy said he wants to run the ball, but they won’t “beat their heads against a wall” if defenses are playing to the run.

• Back to Tulsa’s defense, Gundy said he likes (all by their numbers) nose guard Jaxon Player and defensive end Trevis Gibson. He said they are playing quite a bit of man-to-man coverage in the secondary, and Gundy said that means Tulsa must feel good about its ability to do a few different things, defensively.

• Running back Micah Cooper has become one of Gundy’s “favorites” because of his journey from Henderson State, to NEO and now to OSU. “Young people in society today need to be rewarded for that type of work ethic.” Gundy said Cooper was slowed a bit with a quad strain last week, but he should be better.

• Philip Redwine-Bryant falls into the same category. Gundy talked a lot about his leadership.

• Amen Ogbongbemiga has improved each week as he has gotten more experience.

• They check Bundage each week, but with it being a back injury, it’s hard to put a timeline on a return. “We just kinda test him out each week, and if we think that he’s to a point where he can compete in practice, then we start to get him ready to play in a game.”

• Here comes a lot about the 2011 game at Tulsa that included a three-hour rain delay and didn’t start until after midnight.

• When asked if the 2011 Tulsa game would get a whole chapter in a Mike Gundy autobiography, Gundy said, “I don’t spell very good. It’d be hard for me to write a book. And I can’t type.”

• He said the humidity in the locker room OSU was in waiting the thunderstorm delays to pass was “probably 95 percent.”

• They stopped giving Gundy updates at some point. He told them to let him know if they needed to go warm up and play or go home.

• “I don’t think it’s a good time for college football.”

• He went and asked the official why they were still taking TV timeouts in the middle of the night. “Do you think anybody is watching?”

• The locker room OSU was in was small. “I’m guessing the only bonding was kinda like, well your generation is different. But when I was a little kid, you used to take family vacations, and they’d put you in the back seat. You used to draw an imaginary line where you don’t touch your brother or sister. I’m guessing their bonding was, ‘Don’t touch me, I’m hot,’ would be my guess.”

• Gundy said he thinks they found out then Glenn Spencer’s wife had died during the delay. Spencer was a defensive assistant at the time.

• This might be the best group of receivers Gundy has had in terms of run after catch. He said the 2011 team was good at it, too. He listed Tylan Wallace, Braydon Johnson and Dillon Stoner as guys who are good at it. “C.J., once he gets going, he takes almost one step per five yards.”

• On Wallace scoring off short passes and out running everyone: “He’s done it three times now, right? This year. It’s stood out more. He looks faster. Maybe he’s faster. The male human body develops until it’s 27 years old, so I guess maybe he’s gotten a little stronger and a little faster. It certainly looks that way.”

• C.J. Moore has worked hard and changed his lifestyle to fit into OSU’s culture, not that it was bad before. “His best years are ahead of him, and his ceiling is pretty high.”

• The Cowboy backs are in the flow of the offense but the opposing defenses’ structures haven’t allowed for them to get the ball much with how many defenders are inside the hashes to this point.

• If Jelani Woods continues down the path he is on, he could be an NFL tight end with what he can do. Gundy said he is fortunate that Jason McEndoo, a former offensive line coach, is coaching him because he can help with Woods’ blocking.

• On Woods choosing to switch positions instead of transfer to play quarterback elsewhere: “With all the stuff that’s going on now, I don’t know if there’s any truth to it, all the Dolphins are wanting on the (transfer) portal. That’s just the first thing you hear: a team loses a game, and then you hear about guys wanting to be traded.”

• The linebackers have been “pretty good” thus far.

• On Brendon Evers getting injured Saturday: “I think he’s going to be fine. I’ll find all that out tomorrow.”

• OSU’s staff had a “great relationship” with Stillwater High School’s coaching staff. He said they are able to go to OSU’s meetings and practices.

• He thinks playing Tulsa is a “great in-state game.” He said financially the home-and-home is a good decision for both schools. “It’s a road game for us, but for Oklahoma State, essentially it’s another home game. We have a lot of Oklahoma State people in the Tulsa area.”

• Whatever he did to motivate his team Saturday didn’t work. He said he didn’t see Army coach Jeff Monken’s pregame speech before Army played Michigan, but he needed to borrow it.

• “(The halftime pep talk) was basically a 12- to 15-second four-letter word motivation. I don’t think it was as detailed as Coach Monken’s was at Army. Maybe it was detailed. Yeah, it was real detailed. It was more like a Todd Monken and not a Jeff Monken. It was a little General Patton-ish. If you ever read his book then you’ll follow me on that.”

• The 55,000-person crowd that showed up to watch OSU play and FCS school is helped when a team is winning.

• “Are we fun to watch? Probably. We’re entertaining. Coach has long hair, we throw the ball down the field a lot, we’ve tackled better this season so far. So, it’s pretty entertaining.”

• He is thankful for the people who show up, and it makes a big difference.

• “The majority of the people that are at our games, outside of your students and your young people, are graduates of Oklahoma State.”

• On Israel Antwine’s absence: “It’s just a technicality. I wish I could expedite the process, but essentially it’s administrative issues that are out of our hands. I don’t have any information. If I did, I’d give ya.”

• He keeps up with the NFL guys. Director of creative services Chris Deal keeps him updated on that. Gundy said he doesn’t get to watch too much because the team practices Sunday.

• Dru Brown graded at 100 percent in his 24 plays in terms of reads and ball distribution.