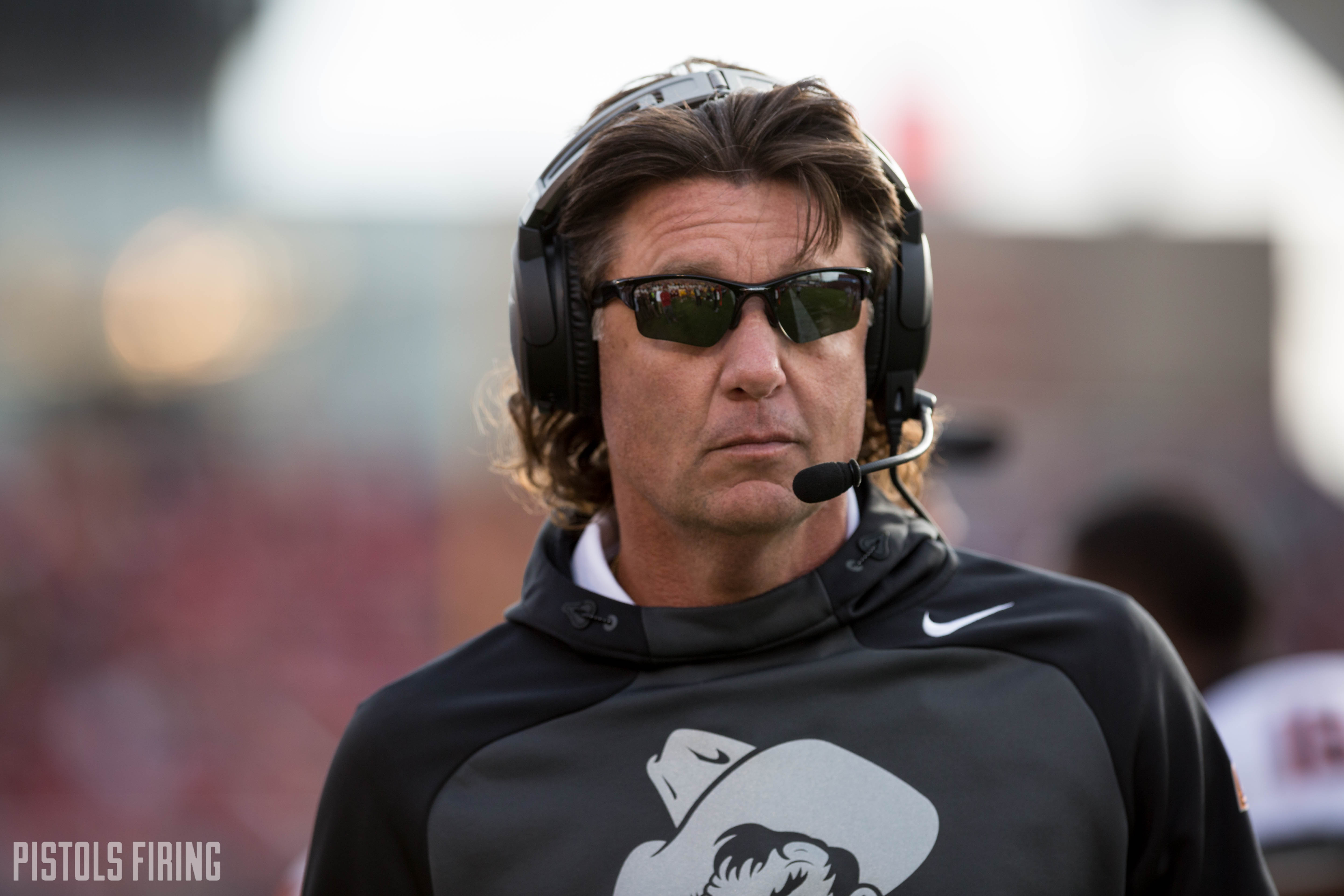 As usual, Mike Gundy talked turnovers, penalties and big plays, but this week his team was on the right side of those Saturday.

Gundy met with reporters after his team’s 34-27 victory against Iowa State, and here is what he said.

• “No turnovers to a certain extent, no penalties, you don’t give up big plays, good ingredients for much better football.”

• “I just thought that our defensive plan was excellent. We missed a few tackles and gave them some yards, but overall we didn’t give up the big plays. That was the difference with the exception of minimizing our penalties and turnovers.”

• On Malcolm Rodriguez’s pick-six: “That was one of those drop-down coverages that they had put in. It was on the other side of the field, so honestly I just saw the tail-end of it. But without watching the tape, I think they bought into what the schemes were, and we had done a good job of getting pressure on him at times.”

• Gundy reiterates his team didn’t get a lot of penalties or give up big plays and that OSU won the turnover battle. “That’s really what beat us the last few weeks.”

• On the growth from the fourth quarter against Baylor to the fourth quarter in this game: “We got in this situation and all four wheels came off the wagon. We got in it again today, and we made two plays and won the game. We should’ve been able to finish it offensively, but we didn’t. I did challenge them if we get in that situation, we’re gonna go for it again. We need to finish it and keep the ball. We didn’t get it accomplished, but if we do, we’ll do it again. We stayed consistent and didn’t panic and made the plays.”

• On Spencer Sanders: “He played well. I know offhand he missed four reads, but he ran the ball effectively. He had an interception, and he did exactly what everybody in this room knows you’re not supposed to do, which is throw across your body back to the middle of the field. As soon as he came off the field, I didn’t even have to tell him. He said, ‘I know. I’m not supposed to throw across my body back to the middle of the field.’ I said, ‘Well I highly recommend that you don’t do it since you know it.’”

• On the wide receiver screens: “We should’ve been running more of those during the year. We got guys that are fast, and (Kasey) Dunn’s guys block well on the perimeter. There’s an advantage there for us. Plus we have two guys that can rush the football, being the quarterback and the running back. So it gives us an extra guy. They made big plays.”

• OSU’s defense held Breece Hall to 4.2 yards per carry. Gundy said he’d like it to be under four, but that wasn’t bad on the road. He said OSU did a better job at filling its gaps.

• On Matt Ammendola’s performance: “And he’s kicking off grass. He never kicks off grass. He did a nice job. Both of those balls were well struck.”

• On what this win does for team morale: “It’s week-to-week. I told them, ‘Now when you get home, you gotta enjoy it in a safe place then tomorrow, you gotta go back to work.’ It’s over with. We gotta get ready for the next game. It certainly helps that they can reap the benefits of hard work.

• There were a variety of reasons why Oklahoma State huddled more Saturday.

• On the wild day in the Big 12: “There’s a lot of parity week to week. A lot of times it comes back to those three things we talked about (turnovers, penalties and big plays). That’s the one thing that college football has going for it right now is parity week to week. The fans love it, people that come to the games love it, TV networks love it. That’s why I just hope at some point we get a grasp of the (transfer) portal, and we don’t get out of our box and turn college football into the NBA because I think right now it’s a really good thing. Everybody likes to watch because it’s exciting and every game matters.”