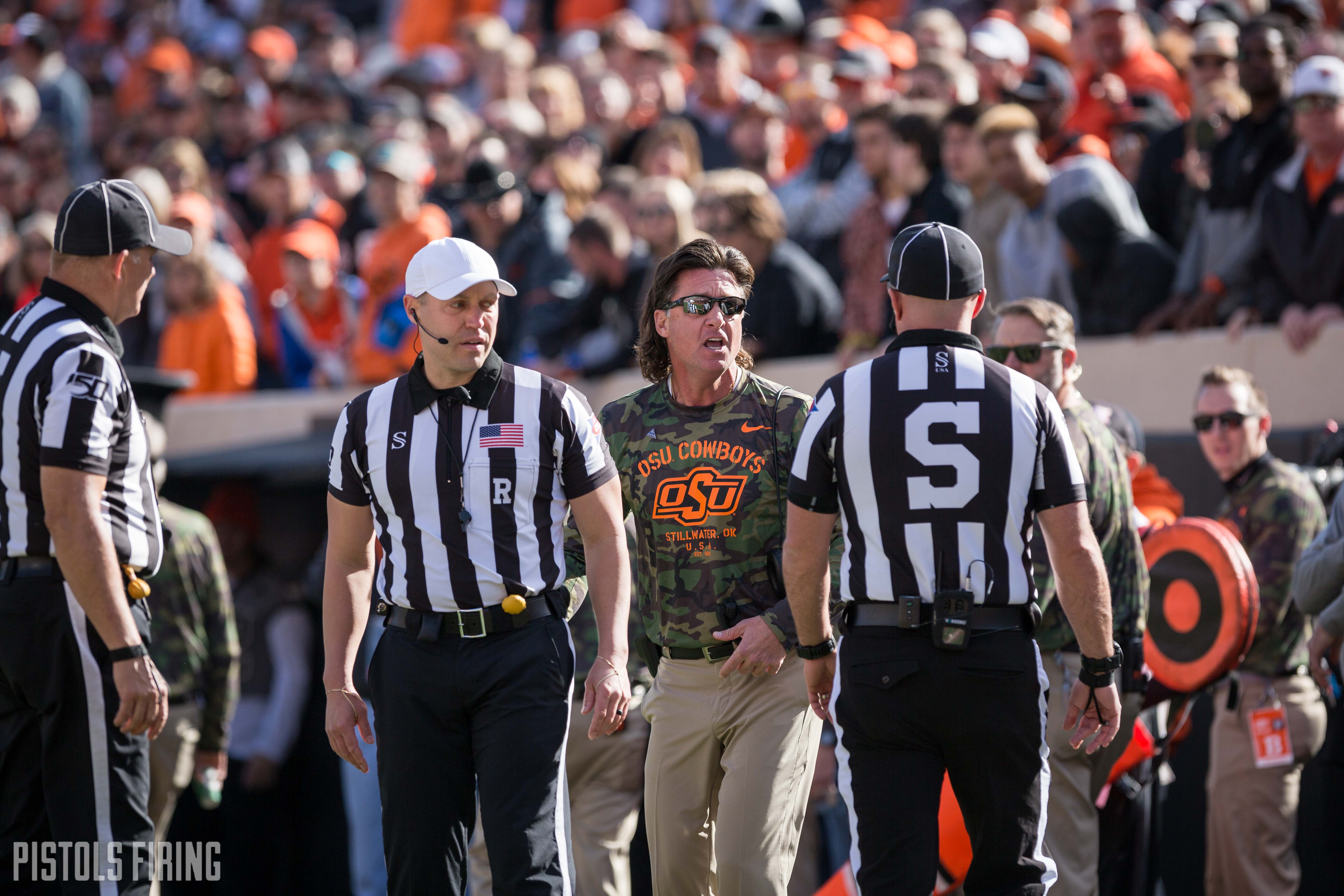 For the 10th straight year, Kansas has not beaten Oklahoma State in football.

The Cowboys topped the Jayhawks 31-13 on Saturday in Boone Pickens Stadium. After the game, OSU coach Mike Gundy talked battling his mentor, his running back’s Heisman hopes and more.

• He wishes OSU would’ve kicked the ball better, but other than that, OSU was “pretty good.”

• OSU’s defense did a good job of containing Pooka Williams.

• “If we could’ve got off the field on third down, we would have had an unbelievable day on defense. We gave them 6-of-17 on third down, and I’m gonna say half of those were more than third-and-10.”

• On Dru Brown: “It’s awesome. He’s been so good. He was a captain in this game, so that tells you what kind of a young man we’re dealing with. He’s practiced hard. He’s stayed focused. And we know it’s difficult, we all do. Everybody sitting here knows it’s difficult to do what he’s doing, but he hasn’t flinched at all. He’s been tremendous. It’s awesome to see him come in. He played pretty good.”

“The second part of that is when he gets a chance, he catches it. You see some guys that are there and they don’t do it, but he finished and he catches it.”

• Gundy said he’s proud of Jim Knowles. Gundy mentions how hard it is to be a defensive coordinator in the Big 12.

• On Dillon Stoner: “It’s been awesome. I said it a couple weeks ago when (Tylan) Wallace went down, he has to play multiple positions, and he’s made plays. Our staff has done a nice job of getting us in schemes to try to open some things up. They had a nice scheme today throwing the ball to Chuba (Hubbard). The same thing is happening for Dillon. He just works hard. He’s every day.”

• On Les Miles: “I enjoyed seeing Coach pregame and Kathy and Smacker. We had a good conversation. I have a lot of respect for Coach, I hope he feels the same way. I asked him if he’s having fun, and he said he’s having a ball, which I’m sure he is. When the game’s going on, I never really notice who’s on the other side. I forget most the times. I’m so zeroed in on what’s going on. It was good to see him again, and I told him I hope everybody was healthy and gives him a chance to go onto the next game.”

• On if he noticed Manny Miles playing a few series at quarterback: “Not until it was too late. He was in two or three series, right? Somebody said they put another quarterback in, and I should’ve known it was Manny, but I just got so many other things going on in my brain that I didn’t pay attention to it. Then (Carter Stanley) came back in, who’s played really well this year which I told him after the game. He’s a good football player. We did a good job against him because he’s a good player. But I didn’t notice Manny being in there. I wish I would’ve paid attention and grabbed Manny after the game, but too many things going on.

“When Manny and my boys were little, they were running around like crazy. So, I’m happy for them. They’re a good family and good people.”

• The offensive line played well without watching the film.

• On Chuba’s workload: “LD (Brown) got (89 yards) for us, and Chuba was over five yards a carry. I would prefer that (Hubbard) is never more than 25 carries, so this is good for us to keep him going, keep him healthy. Over a season, those guys take so many hits. He’s at 126 yards. Last year we would’ve said he had a great day. This year it’s an average day for him but still a pretty good day.”

• On if there is pressure to allow Hubbard to get more yards for his Heisman resume: “Those discussions take plays all the time. Traditionally for us, it’s been the wideouts, right? Over the last six or eight years there’s a lot of games where we’re pretty far ahead, like today. We hadn’t been in this situation much this year. Every game’s been a battle. The discussion takes place. It’s a real gray area, and it’s a catch-22 because you try to pop him for another 40, then if he get’s hit, all of a sudden you’re not very smart because you need him for next week. Those discussions take place.

• On how he thought his players handled chippy plays at the end of the game: “I complemented them. I thought they did a good, (Trace Ford) did a great job. I did not see it, but I was told that one of their players took a swing at him and a follow-up swing, and he didn’t swing back. There’s two things there. One, for a freshman, that’s having really good composure. And two, he knows it’s not going to hurt him. He’s got a helmet on. So what good does it do to swing back? It can’t hurt you. I was very proud of them. I thought our guys handled their self well. Teams get frustrated. When you’re behind, and you know the game’s out of reach, you get frustrated. It doesn’t do any good if our guys swing back. I addressed it with them. I told them I was proud of them the way they handled it.”

• OSU’s punters and kickers “weren’t very good” Saturday. Gundy said he still has confidence in Matt Ammendola despite his misses.

• On the military: “I don’t care if you’re city, country, white, black, democrat, republican, rich, poor, you support the people that go fight for this country. Period. Unless you wanna go fight yourself. I’m not tough enough to do it. There’s a lot of people and a lot of families that are effected by people that are willing to give their life up every day over there overseas. When we have a chance to support them and the Folds of Honor, the families, we’re all in. I asked the team, the team was all in.”