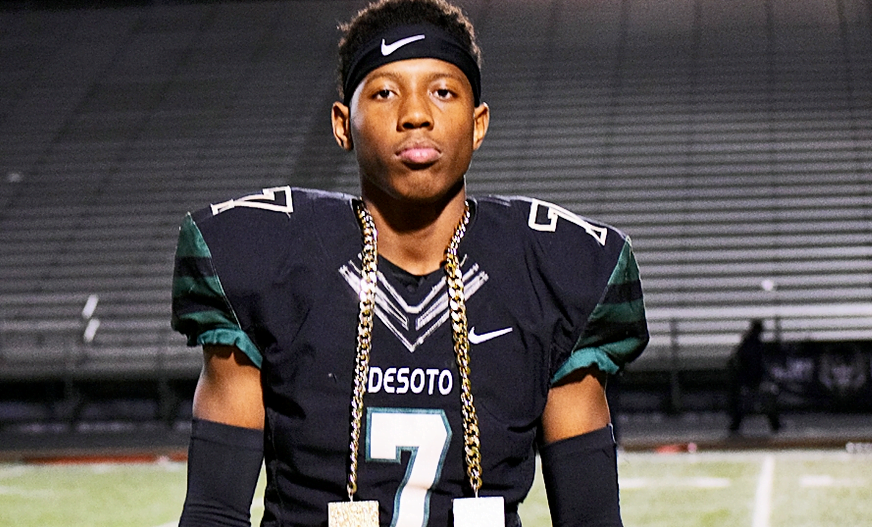 After breaking down 2020 commit Grant Mahon last week, I’ll stay on the defensive side of the ball and take a look at defensive back Jabbar Muhammad. The DeSoto, Texas native was the second commitment of the 2020 recruiting cycle for Oklahoma State and the first commit for the Cowboy defense.

The Pokes extended an offer to the young defensive back in May 2017. Muhammad picked up several offers after that, but ultimately decided to commit to Oklahoma State in late April 2018.

He’s played two years on the varsity squad at DeSoto High School. His sophomore season, he was primarily a backup, playing behind upperclassmen, and recorded 7 total tackles, including 1 tackle for loss, and 1 pass defended.

The 5-10, 165-pounder had a very impressive junior campaign as he took over as the starter for DeSoto. Muhammad racked up 32 total tackles, including 3 tackles for loss, 18 passes defended, 5 interceptions, 1 forced fumble, 1 fumble recovery and 1 quarterback hurry. He helped lead the Eagles to the Area Round of the Texas 6A High School Playoffs, where they were knocked out by Southlake Carroll.

He has family ties to OSU, as his older cousin is current Cowboy starting cornerback A.J. Green. In addition, he has two brothers currently playing at the college level in Nevada cornerback EJ Muhammad and North Texas safety Khairi Muhammad. Outside of football, the DeSoto product also runs the 4×100 and 4×200 relays on the track team.

Note: He is not currently ranked on Rivals.com, but they do have him listed as a three-star prospect.

All of the offers mentioned above (except for North Texas) were extended before he committed to OSU. I would assume the Mean Green are still pursuing the young DB mainly due to the family connection with his brother.

“They play press man a lot, and I like the way they get in the receiver’s face and play physical,” Muhammad said. “That’s my kind of play, and that’s my strong suit. [247Sports]

From watching film on DeSoto, they primarily have their cornerbacks in tight man coverage, either utilizing a press technique or a press-bail technique. Additionally, they would also incorporate a catch man technique, where the corner is several yards off the line of scrimmage and jams, or “catches” the receiver at that point instead of at the line like you would see in press coverage. This is also something that Knowles uses at OSU.

I watched DeSoto’s playoff matchup against Southlake Carroll, and below is an example of how the DeSoto corners normally lineup. Muhammad is shown at the bottom of the screen.

Muhammad was tasked with guarding Southlake Carroll’s top receiver and four-star recruit R.J. Mickens. Although Mickens is mainly being recruited as a safety, he is a very talented receiver who finished last season with 43 receptions for 643 yards and 3 touchdowns.

However, with Muhammad on him, Mickens only had 1 catch for 16 yards against DeSoto. Muhammad had him covered extremely well all game, which didn’t allow for many overall targets. Although, when Carroll quarterback Will Bowers did target Mickens, Muhammad shut it down.

What Muhammad lacks in size, he makes up for with skill and technique. The Texas DB is extremely athletic and has been very competitive at all the showcase camps he’s attended, including winning MVP at The Opening Dallas. Muhammad has also shown he can cover well off the line of scrimmage to go along with his ability to play tight on the line.

Being a track guy, Muhammad has nice top end speed and also has great lateral agility and solid hip movement in coverage.

Even though he’s shorter than current cornerbacks Green and Rodarius Williams, I still think his talent level gives him the capability to be future starter for the Cowboys. His overall coverage skills are very impressive and tie in will with what Knowles likes to do on defense.