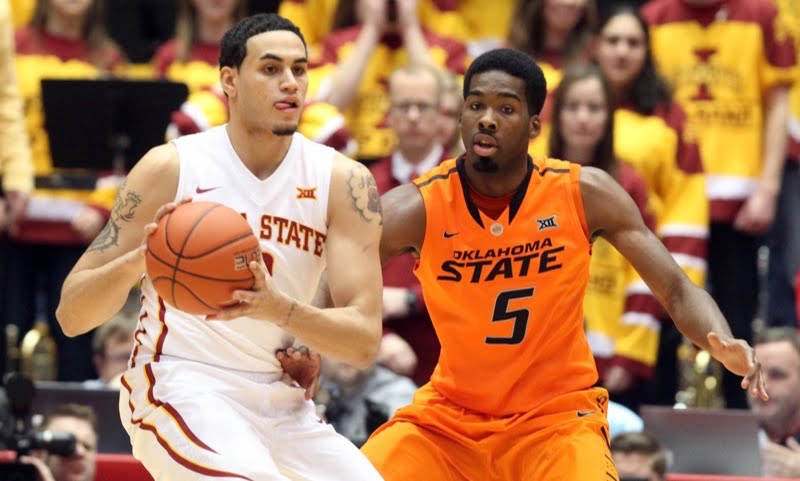 Tavarius Shine had a breakout game against Iowa State. (USATSI)

“Frustrating” is one word for the way things usually turn out at Hilton for Oklahoma State’s basketball team. “Encouraging” is another for the way they unfolded on Tuesday night.

In the last four seasons OSU has lost all four of its games against Iowa State in Ames — three of them by three points or less including Tuesday night’s 63-61 battle.

After a first half that resembled two drunk chickens pecking at each other for 20 minutes Iowa State strung together a mini-run to go up 34-23 shortly after halftime.

At that point I thought the game was over (even tweeted it). But OSU showed resilience over the final 15 minutes and climbed back in the thing with a 20-8 run to make it 43-42 with 12 minutes left.

OSU wouldn’t lead again after that, though they had the ball with 21 seconds left down only two to the No. 17 Cyclones.

Then this happened with one second left and OSU walked away with yet another defeat at the hands of Fred Hoiberg’s squad.

Le’Bryan Nash had 15 of his 19 points in the second half and chipped in six assists and six boards for a stat line worthy of an All-Big 12 player. Unfortunately he also had some gaffes worthy of the end of Oklahoma State’s bench.

Phil Forte also did his thing with 21 points on 8/15 shooting but unfortunately (and per the usual) everyone else not named “Nash” or “Forte” only had 21 combined.

Still, like I said at the top, this isn’t an Oklahoma State team that’s supposed to be talented enough to be competing on the road in places like Ames.

A win on Tuesday would have been an incredible boon for OSU’s tourney chances. A loss, especially one like this, isn’t a huge deal.

You can either criticize Travis Ford for not building a very talented team or you can criticize him for not winning enough tough road games but, this year anyway, you can’t really criticize him for both.[1. Last year with two NBA guys? Yes. But this year I think he’s doing a pretty good job with what he has. As for that compilation of talent…]

This squad is actually a lot of fun to watch even though it’s a scorer or two away from being worthy of the upper crust of the Big 12’s ridiculously rich conference.

More notes and thoughts from what would have been a monster early season win for the Pokes.

• Travis Ford played 10 guys in the first eight minutes. His hook makes Eddie’s look like he was a generous and benevolent philanthropist.

• How good is Forte coming around screens? Also I spent the better half of the second half trying to come up with the OSU football equivalent of Forte. Josh Stewart? Perrish Cox? Any other ideas?

• I’ve been saying this all season but basically if you commit to taking away Nash or Forte and you’re mildly competent offensively then you’ll beat OSU. ISU chose Nash even though he blew through their gameplan in the second half.

• College basketball is pretty tough to watch sometimes after experiencing the NBA, isn’t it? That first half was like an above average Colvin game.

• Nash is like the wayward kid who has to be spanked every day before he starts obeying. Except he’s a senior and playing for millions of dollars. But yeah.

• Tavarius Shine, come on down! The frosh was 3/6 with 8 points, a board, an assist and a steal in limited minutes. He’s intelligent (for a freshman) too. And sneaky — he always knows where to be and he’s not trying to dunk or hit 30-footers on everyone.

He also has 14 more points in conference play than Cobbins. I’m a fan.

• Jeff Newberry is super athletic in transition. I’m not going to invoke the name of No. 22 because he’s not in that league but he’s definitely the most athletic of OSU’s players on the fast break. Besides Mitchell Solomon of course.

• How about the announcer saying “NASH HAS NOT MADE A FREE THROW YET!” near the end of the game. He was 0/2.

• You wouldn’t have guessed it from the first half but ISU has six dudes who average double figures.

• Jeffrey Carroll’s shot is beautiful, it looks like what Klay Thompson looked like in college. Related: why does it never go in?

• That McKay cat is terrifying. He didn’t do much against us but he can go a little bit.

• This isn’t really a bad loss for OSU but man, it would have been a terrific win. Win this one and you’re suddenly probably only six wins from the NCAA Tournament with eight home games left and road games at Tech and at TCU.

Travis Ford fell to his knees in disbelief at the lack of pressure on Dustin Hogue's 3.

• Still can’t believe ESPN switched from the Kentucky game to OSU-ISU. That would be like the Longhorn Network passing up a live Texas football game to run A&M baseball reruns.

• This stat happened in the first half.

Iowa State is 1 for its last 25 3-point attempts. Can’t imagine a streak like that happening again this year.

• Really though, Fred Hoiberg is pretty sexy. Except that he’s named Fred.

• Nash played his 108th college game tonight — he’s had more than 3 assists in just 10 of them. He’s had a career high of 6 assists in just two of them. Both at Iowa State and one of them tonight.

• I can’t believe this guy is good at shooting 3s.

• This is really scary.

• That last possession — let’s talk about it. I like OSU going for the 3 there and I actually like Shine taking it since Forte had three players and a band member on him.

I do wonder if he had time to pump fake because Hogue would have ended up in the ninth row. He probably didn’t (and shouldn’t have) but it would have been wide open.

• Speaking of wide open — go back to the clip a the top of the page. Cobbins probably would have missed the shot but he had zero people around him when Nash gave it up.

Next game: Home against Texas on Saturday