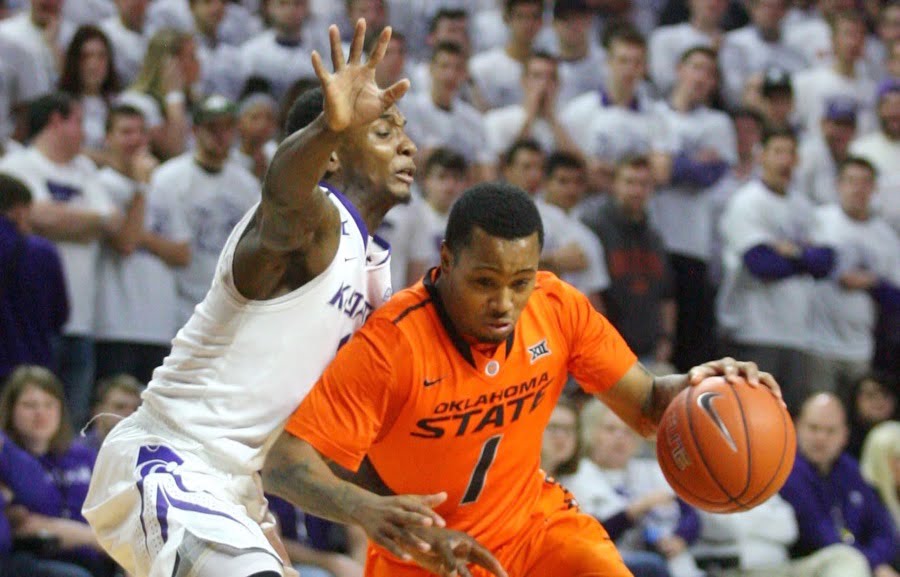 That’s how many it took for OU to bury OSU early last Saturday and yep, it’s the same number that it took to beat OSU in Manhattan this Saturday morning.

Nino Williams of course wasn’t the only player who scored for Kansas State but there were times it felt like he was.

Kansas State got out to an early 31 to 17 lead and kept the Pokes at arm’s length the rest of the way finally finishing them off 63-53. The Wildcats were led by Williams’ 20 on 10/13 shooting (he started 8/8 from the field) and Marcus Foster’s 14.[1. Foster didn’t score in the first game between these two teams.]

It seemed like every time OSU cut it to five or seven KSU would score two quick ones and push it back to double digits. It went on and on like this for most of the second half.

For OSU — I’m running out of ways to say pretty much the same thing every game so I’ve created a mad lib for all of us to auto-fill in after conference road games.

Does that sum it up on pretty much every conference road game or am I off on this one?

This is just the second time all season OSU has allowed a team to shoot over 50 percent from the field (OU was the other) — Kansas State shot an absurd 57 percent. They shot 75 percent in the second half alone. 75 percent!

Part of that is that Nino had an out-of-body experience but part of it is genuinely because OSU seems disinterested with playing lockdown defense.

It’s telling when Tavarius Shine shadowing Marcus Foster and getting a steal at the very end of a game stands out as much as it did today. Was that a individual defensive play?!

OSU has suddenly fallen into that frustrating rut it usually does under Travis Ford. You know the one — they show so much promise early in the season and then can’t win a road game when conference play comes around.[1. 2-10 in the last two seasons with a win at TCU and a win at WVU.]

You’re not exactly asking them to move heaven and earth to play with a KSU team that lost to Texas Southern at home this season but they just seem like they’re playing a recreational pickup game for most of the first half of conference games.

It’s infuriating and frustrating and everything you would expect it to be from a team that actually shows signs of being pretty good down the stretch of games.

• KSU is now 20-2 at home in conference under Bruce Weber…? And 0-1 against Texas Southern?

• Travis Ford’s early technical where he ripped his suit jacket off was a jewel. He took it off 53 seconds in and never put it back on.

• What made it better is that he was wearing tennis shoes for Coaches vs. Cancer. He looked like somebody threw some Nikes at a Dillard’s mannequin.

• On the other hand, the technical actually worked — Ford was pissed on a no-call when Forte went to the bucket and Forte got the call two possessions later.

• I liked OSU in the zone defense early. If they aren’t going to show intensity in man-to-man and Kansas State isn’t going to make 3s (2/8 from the field) then why not go back to it?

• OSU was 3/14 from 3-point range. That seems bad. Therein lies the issue, too. Make three more of those and you’re shooting 43 percent from 3 (doesn’t seem like too much to ask) and it’s a 1-point game. Alas.

• What page of the playbook is the Anthony Allen jump hook bank shot on?

• OSU’s first half performances would make 2012 TCU look like a title contender. Then it goes out and looks like 1992 Michigan in the second half of most games (not this one).

• I legitimately didn’t know Bill Snyder has a highway named after him.

• Why do any teams — NBA, D-League, college, Little Dribblers, etc. — still shoot long 2s? Is there not enough data to convince us otherwise yet?

• Kansas State started chanting “flopper” at Forte when he flopped in the second half. Shouldn’t they should have chanted “just like Marcus”?

• Speaking of flops, the Forte flop was actually effective (unlike Marcus’) because he never does it. He got the call and went to the line.

• OSU went nine minutes in the first half in which it only scored four points. Le’Bryan’s first points came with 1:44 left. A Twitter follower cleverly suggested he’d submitted the first-ever DNP (player’s decision).

• I thought the 11 AM crowd went pretty hard for KSU. That’s a dangerous spot to put your team in with a game that early but they showed out and brought it home. WEll done.

• One of the announcers described a Thomas Gipson dunk as a “fingertip dunk” — I don’t think that’s a compliment.

• KenPom had OSU winning 62-60…I’m not sure KenPom (or anyone) has the Marcus Foster situation figured out.

• It took OSU 31:22 minutes to equal what Klay Thompson did in the 3rd quarter last night — that is, score 37 points.

• That Shine-Griffin-Newberry-Hammonds-Allen lineup in the first half was something else. And I don’t mean that in a “man, Russell Westbook is something else” kind of way.

• Forte has gotten pretty good at getting to the line when he’s covered deep. That’s been important for his development — something Keiton never fully learned.

@pistolsguy @CowboysRFF interesting that Forte has definitely altered his game to attack more b/c of pressure outside.

Next game: Tuesday against Baylor in GIA.