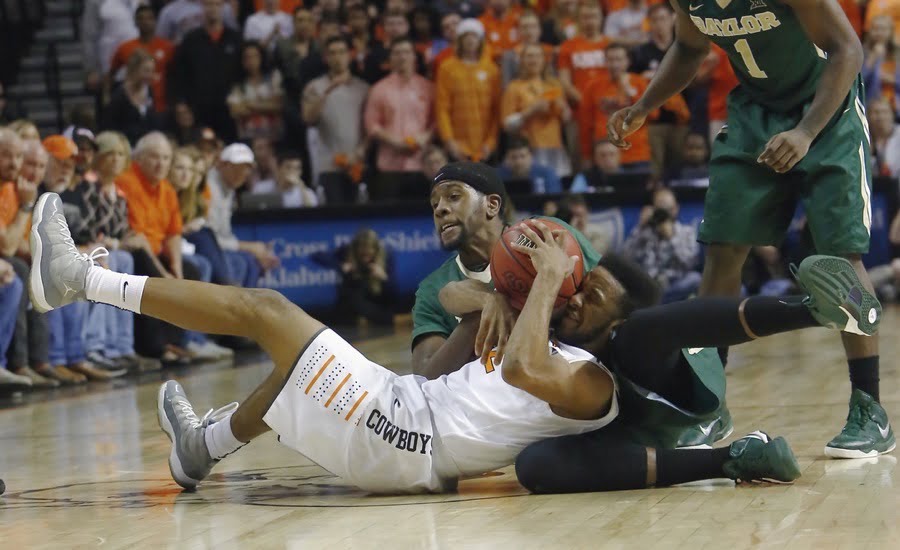 Jeff Newberry fights for a loose ball against Baylor. (USATSI)

I lost count of the number of times on Tuesday night I found myself pumping my fist at my television screen and shouting “yes, do that all the time!”

The final few spurts for the Pokes showed the full breath of what this team is capable when it plays to its potential. It was, at times, exhilarating.

OSU beat Baylor 64-53 on Tuesday in GIA by extending a hearty nine-point halftime lead in the second half even as Baylor absorbed every punch it threw at them.

The pieces, for stretches anyway, all seemed to fit for the Cowboys.

There was Anthony Hickey running amok handing out dimes like they were passing grades and everybody turned in their capstone project on time.

“He’s just a warrior, a complete warrior,” said Travis Ford. “He’s getting back to being that difference-maker that we know he can be and being one of the better defenders in the league.

“Protecting the rim, rebounding, a great one-on-one defender and he helps so many guys out. He erases a lot of mistakes.”

There was Tavaruis Shine hitting corner 3s, Le’Bryan Nash asserting his will and Jeff Newberry confirming that, yes, you did well Markel in the passing on of the No. 22.

Oh and there was Phil Forte continuing to shoot and shoot and shoot until they finally fell, which they did in bunches at the end as he plunged the blade into the heart of the Bears.

The whole thing wasn’t that easy though as OSU got down 13-6 early and committed the majority of its 12 turnovers for the game in the first half.

Its 3-point shooting kept OSU in the game though and the Pokes held Baylor to just eight points over the last 13+ minutes of the first half.

They coupled that with a slick streak in the last seven minutes of the first half that turned a 17-14 deficit into a 30-21 lead going into the locker rooms. It was a lead that was never surrendered.

OSU rebounded well (Baylor won that battle 35-34) against the No. 6 rebounding team in the country but it also shot incredibly well, especially from 3.

The whole of OSU’s success at times can feel like it is reduced to a 3-point shooting contest. That’s been a good thing for them at home (as well as with Phil Forte on this side of that contest) and it was again on Tuesday.

It seems too simplistic to reduce it to these terms but  even as you watch the games you can feel the momentum sway towards whichever team has the hot hand from 3.

Maybe that’s just where college basketball is at or maybe that’s where Ford wants his team to be (maybe he should with Forte in tow) and I think I’m fine with it.

It’s not sustainable long-term and you certainly aren’t going to win any conference titles with it if that’s all you rely on but for this team in this year? It just might work.

More thoughts and notes from the game…

• It legitimately looked to me like Scott Drew was reading his plays off a napkin. I kid about him because I actually don’t think he or Ford is that bad, but the napkin must go.

• I laughed at this for some reason…

• How about this? OSU shot just five FT through first 38 minutes of the game. Five!

• Speaking of free throws, how great was Forte’s Harlem Globetrotters impression at the end of the game. Baylor was treating him like he had ebola even though they badly needed to foul somebody.

• OSU was just 55 percent to win this game according to KenPom. Gotta have these to make the Dance.

• I’ve seen more action at a parent-chaperoned church camp than that scrum thing that happened on Baylor’s bench. Did Scott Drew say a curse word or something?

• Anthony Hickey’s lines continue to be difficult for the mathematically challenged among us: 8 points | 4 boards | 10 assists | 2 steals. It’s true that he had four turnovers (Tyree Griffin tossed in three of his own) but I’ll make that tradeoff any day.

• Here’s what Ford said about him:

“That is what he is capable of doing. Anything less than that, he is underachieving and our team will underachieve. (It helps our team) when he’s locked in defensively, getting assists and making big shots.

“He had an incredible stat line: eight points, 10 assists, four rebounds, two steals and he holds one of the best players in the league to six points.”

Forte is excellent at faking people on the speed of his drive in transition.

• Don’t throw alley oops, Le’Bryan. Actually while we’re here, don’t do anything besides hit nine-foot fadeaways, get to the line and find space on the block. You will average 43 a game if you do those three things effectively.

• Newbs was good tonight. Not great, but certainly good enough. Where are these things on the road?

• How is it that Tavarius Shine knows his role 55x better than Le’Bryan Nash does? Somebody tell me how that’s possible.

• Baylor has a player called Deng Deng. Longar Longar would like a word.

• While we’re on Baylor players…don’t put “Sr.” on your uniform, Rico Gathers. We get it, you’re a dad. Cool, lots of us are dads. I don’t sign my emails Kyle Porter Sr. (Golf Writer, OSU blogger). Mostly because my kid isn’t named Kyle but even if he was…!

• This is really cool…

• Here is Phil Forte’s range. I’ve made it official.

• I’ll leave you with this tonight…

Today we Remember the 10 at Oklahoma State University. May we never forget. #OSU #RememberTheTen pic.twitter.com/PzhYJDri7d

Next game: Bedlam on Saturday night in GIA