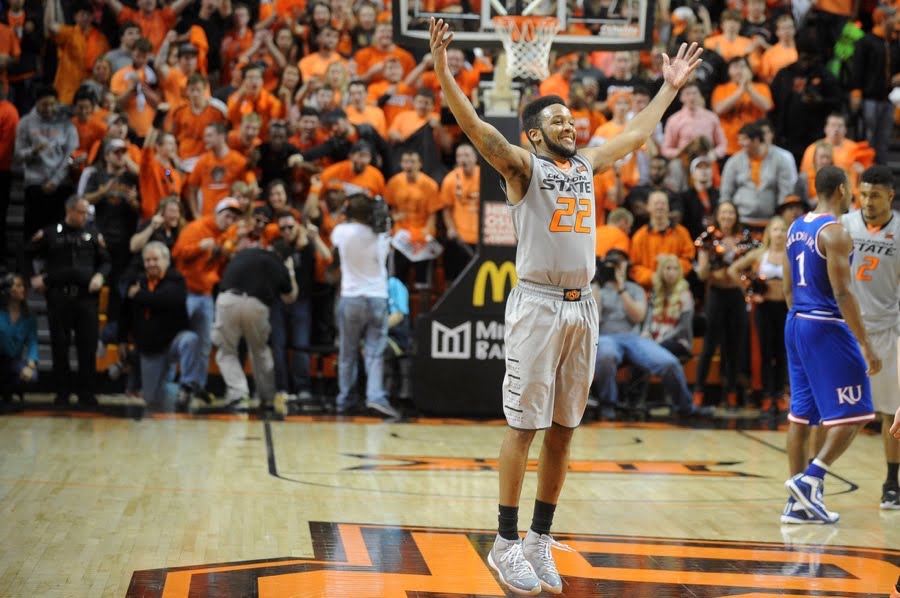 Jeff Newberry was a defensive stalwart on Saturday. (USATSI)

• Going from the Longhorn Network announcers on Wednesday to Mark Jackson and Jeff Van Gundy is like an 18-year-old male graduating from a 1A Oklahoma High School with 15 people in his class, walking into the first day of orientation, and seeing how many girls he’s about to go to school with.

• I don’t love the gray unis (I don’t hate them either) and now, given that’s two straight over KU in GIA, we can’t not wear them against the Jayhawks.

• What was longer: Interstellar or the end of Michigan State-Illinois?

• The Perry Ellis jokes, if creative like this one, really do not get old.

Perry Ellis is really going to hear about this at Bingo Night later.

• Van Gundy and Jackson were right, how is Rickie Fowler not listed on the PGA Tour plaque in Heritage Hall?

• I hate the graphics ESPN puts up that tell me Ford has nine wins against top 10 teams. How many has he played? 11? 110? Doesn’t that matter?

• I mentioned it above but Bill Self Face is the best face. It’s the face he gets when he knows he’s cooked but he doesn’t care because he still coaches Kansas and you don’t. It’s arrogant, amused and pissed all at once.

• I think this dude was stoked about the win.

• Van Gundy asked on the air if Mitch Solomon gets any cash for being sixth man of the game and I don’t think he was kidding.

• Why wasn’t Kansas fouling Hickey at the end of the game? Kinda makes you wonder about those “Self loves letting Travis Ford win a few so they won’t fire him because he knows he can beat him whenever he wants” rumors.

• Haha, Beebe was in great form after the game…

• That lefty spin move from Nash late in the second half made my jaw drop. He went left, spun a couple of times and floated it underhanded from about six feet. It was astonishing.

• There were 116 free throws in the two games between these two teams this season. That’s not ideal.

• More than anything I felt like today was just flat out fun. There was always a cloud hanging over last year’s team and even though that win against KU at home was great, this one felt better. Maybe that’s just me but this team is so easy to root for.

• I don’t understand why teams like Kansas (and Texas) don’t crush OSU on the interior. Self was right, Cobbins and Nash outworked KU’s big men and Solomon gave them a run, too. That has to be infuriating as a KU fan.

Self: "Cobbins and Nash were better than our bigs … and I thought Solomon played well, too."

• The play-by-play guy compared a move Wayne Selden made at one point to Steph Curry and I thought we were going to have to get somebody from Stillwater Medical Center to check on Jeff Van Gundy. He acted like somebody had just swatted his toddler in the face with a two by four.

OSu hit so many dudes streaking to the bucket in the second half.

• Just want to point out that Jamari Traylor walks every single time he touches the ball. Nash does too, but still.

• Forte played a slick game for having the flu. He’s been so good on defense this season (leads the Big 12 in steals) but that gets overshadowed because he gets buckets from 35 feet on the regular.

• Ford being mic’d up for the pep talks was something else…between him and ESPN, who regrets making this happen more?

• In case it isn’t obvious, I love Anthony Allen. He’s just the best.

• The guy in the plaid is Scott Pierce! How old do you feel now?

• More greatness from Blake. He was on a roll.

• Why were Kansas’ warmups blue and crimson? Or was that just my television?

No, I did not teach Anthony Hickey to shoot free throws #GoPokes

Next game: Monday against Baylor in Waco