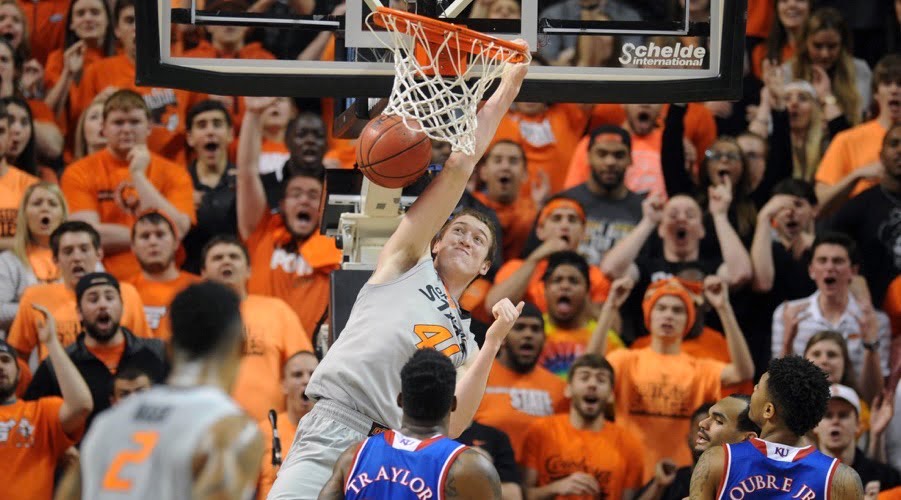 Mitch Solomon was awesome against Kansas on Saturday. (USATSI)

Somewhere in Stillwater, at the very moment that you’re reading this, Anthony Allen is high-stepping in celebration of OSU’s 67-62 win over No. 8 Kansas in GIA on Saturday afternoon.

It might be in front of Hideaway on his way to a celebratory pizza, it might be on the way back to his dorm room or he might have just headed over to Boone Pickens Stadium to get a workout in.

But it’s happening, because that’s how Anthony Allen celebrates.

Everyone else should be celebrating too because Oklahoma State took down Bill Self and Co. after trailing by 11 (!) at halftime in its own gym.

What ensued in the second half was a defensive performance for the ages as Kansas shot 8/30 from the field and Anthony Hickey and Le’Bryan Nash combined for 22 of OSU’s 37 points after the break.

Travis Ford urged his team to press (and pressure) Kansas and it did.

Travis Ford to his team before 2nd half: "The press has to be a difference maker. It has to change the game." #OKstate

OSU took the pressure up a notch (or two?) and Kansas committed 18 turnovers — 12 of which were swipes by the Pokes.

The first half wasn’t as impressive.

Kansas hit 7/9 from 3-point range in the first half and OSU missed all nine it took before righting the three-ball ship in the second half with a pair from Hickey and a deep one from Phil Forte (what other kind are there?)

What was more impressive from OSU offensively in the last 20 minutes was its ability to find the cutter and repeatedly get alley oops and layups when Kansas had to settle for jumpers and contested threes.

This was the norm rather than an outlier in the second half:

The whole thing got away from Kansas in a hurry, too.

Forte hit a baby fadeaway from the free throw line with 11:23 left and OSU would never trail again. GIA turned into one giant snowball thundering downhill threatening to detach Bill Self’s hairpiece from his skull.

Self had that exasperated “dang this place — I hate it, I love it, I don’t know how to feel about it” look going the entire second half.

The two guys that really stood out to me for the Cowboys were Anthony Hickey and Jeff Newberry. Those two combined for five steals, eight boards and a block and hounded Brannen Greene and Frank Mason the entire second half.

Their stat lines belie their contribution to the game, too. I can’t even count the number of times they redirected a Kansas player on offense or forced somebody into a situation where a bad pass was imminent.

It allowed Nash to go to work on offense as OSU ran wild on fast breaks and got legitimately good looks (!) multiple times late in the game with the shot clock running down.

Self: "Le'Bryan was the best player in the game."

There were also a few ill-advised Hickey bombs and three whiffs from deep from Leyton Hammonds (more on him in a second) but OSU looked controlled and relaxed coming down the stretch — not exactly adjectives you would use to describe Travis Ford or his teams.

The whole second half felt like a party that Leyton Hammonds could not believe was taking place in his house. An example:

That spin move lefty finger roll from Nash had me like: pic.twitter.com/YFwljl09wY

GIA knew it too — the court storm at the end was as speedy as it was awesome and you know what, it’s a college basketball win over a top 10 team at home when there hasn’t been a ton to celebrate this season.

You rush the hell out of that court, college student.

You stomp on the white maple and chant unprintable things at Bill Self.

I have no problem with that. Plus (and this might be a bad thing) OSU has become one of the best court-rushing crowds in the country.

Before we get to the rest of my notes, I would be remiss not to mention the work Mitch Solomon did. At one point in the second half Jeff Van Gundy (who did the game for ESPN) was screaming “I love Solomon! I do!” after the freshman tipped in a miss on offense.

No. 41 finished with four points, four boards and two steals including an awesome cut and dunk in the first half.

He (along with Cobbins) was tremendous against some big men from Kansas they have no business hanging with.

And now all of a sudden OSU is still holding serve at home into the middle of February.

Again, we’ve established that nine conference wins will get you into the NCAA Tournament and with two games against TCU and one still left against free-falling Texas Tech, the 6-5 Cowboys are sitting pretty.