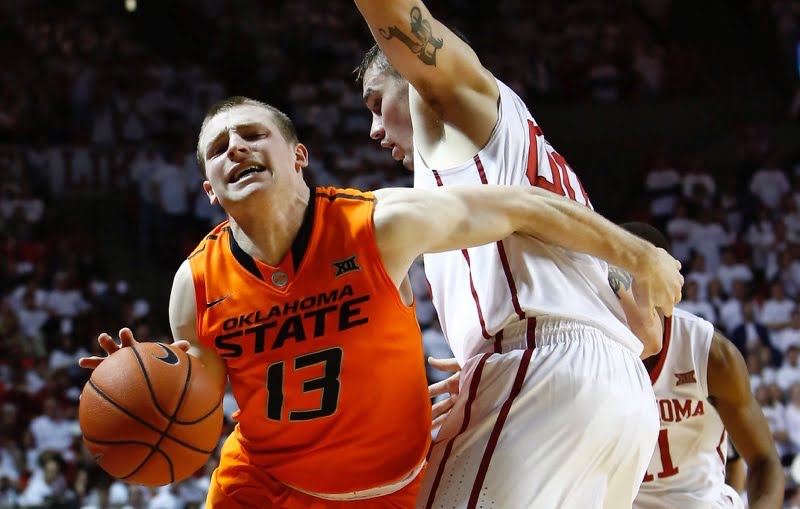 Remember that time we were ranked?

That won’t be the case on Monday as OSU lost 82 to 65 against OU in Norman to finish off its second of two losses this week at the hands of Big 12 contenders.

The Cowboys missed its first 15 (!) 3-pointers and shot just 37 percent from the field and yeah it was probably even worse than it looks in print.

In fact, this is a good summation of the festivities:

Heck, if you take Isaiah Cousins’ abysmal performance out of the equation OU was 27/42 from the field and pretty much put the game away after scoring 11 straight to start the game after OSU jumped out to a 2-0 lead.

OU didn’t just dominate the box score either. From the opening tip until the final horn they left no doubt about who was in control of this contest.

There were no double punts to Tyreek Hill on this Saturday night in Norman.

I really though OSU would climb back in it in the final 20 minutes but Lon Kruger’s squad did a really good job controlling the clock and playing the string out despite getting outscored 45-41 in the second half.

For the Cowboys Leyton Hammonds was on point in the second half hitting 5/7 threes but it didn’t much matter as OSU was already down 21 points at halftime largely because of Hield’s unconsciousness.

Can we talk about that for a minute? 15 shots left No. 24’s hands tonight (10 from the field, five from the free throw line) — he missed two of the free throws. That’s it. Somebody text me to confirm that he gets sufficient oxygen when he’s revived. I’m legitimately concerned.

Phil Forte didn’t make a 3-pointer for the first time in 22 games and finished with just 11 points and Le’Bryan Nash did his usual “I could dominate this game but I’m going to get torched by lesser players around the rim” thing and finished with 15 points and eight rebounds.

Anthony Hickey had 14 points, eight boards, three assists and five steals but it was a futile effort. He might have won best supporting actor in the Big 12 on this Saturday but the leading role was empty for Oklahoma State.

The whole thing was hideous. It was as bad as OSU has played all year outside the great state of South Carolina.

This wasn’t a game OSU was supposed to win but a closer outcome certainly would have been more encouraging as a projection for the rest of the Pokes’ season.

Still, sitting at 2-3 in the conference after playing games at OU, Iowa State and Kansas is more than acceptable. Now you just have to win the ones you’re supposed to.

Other notes and thoughts from an ugly night in Norman…

• Acccording to KenPom Buddy Hield’s closest comp is Lacedarius Dunn’s junior year. That seems pretty fitting to me. Lacedarius was a beast.

• A different part of me is glad OSU got blown out so badly in this game. It feels like that means there’s a regression to the mean in more winnable games (at OU isn’t a “winnable game”). Maybe that’s the nerd in me.

• Where do I bet all of the money that Hammonds starts against Tech on Wednesday?

• I’m pretty sure on every Nash drive he (or someone near him) calls for an “and 1!!” Like, literally every single time the mic picks it up.

• Ford should try and patent this.

• Did I hear correctly that this is just the 14th time both teams have been ranked during Bedlam? That can’t be true, can it?

• Speaking of things that are weird…

@pistolsguy Travis Ford has more wins at Allen Fieldhouse than he does at Lloyd Noble.

• It’s difficult for me to describe how perfect Ryan Spangler is as an OU athlete. I think if you picked a cross-section of Americans and had them draw “the prototypical OU athlete” nine out of 10 would draw Spangler.

• From the first half of the Kansas game until the second half of this one OSU missed 25 straight 3s. I feel like that’s actually difficult to do.

• Does Anthony Allen have the biggest mouthpiece ever or is that just me?

• This was interesting. Newberry was garbage in the first half. He missed four shots, had zero other stats and didn’t play in the second.

#OKState goes with Hickey, Forte, Shine, Nash and Cobbins to start second half.

• Cobbins was 0/1 with two fouls four minutes into the game. Nice. While we’re here I’ll go ahead and say it — Cobbins isn’t a very good college basketball player. I know about the intangibles etc. but he’s just average at best.

James Dickey seemed pumped to talk with Toby Keith at halftime. Would love to listen in on that conversation.

• Good thing football is the only thing that matters in this rivalry AMIRITE?

• Spangler, as much as I make fun of him, is basically just a walking double-double in Bedlam, isn’t he? He has 11-11 again tonight.

• Kansas State is 4-1…its only loss is Oklahoma State.

"What's that fancy building with all them books they just showed on the TV?" — 90-percent of all OU Fans #Boomah pic.twitter.com/EkG8WAyHWW

• Which do you trust more: Le’Bryan bringing the ball up or your wife at a wine tasting with Leonardo DiCaprio?

• Speaking of Nash, what are the odds my 2-year-old could get in his head within a two-hour span of hanging out with him?

• Nothing says “we are screwed” quite like playing Joe Burton in the first half of a conference road game.

Does it depress anyone else knowing most of #okstate's current roster was in like, the third grade the last time the Cowboys won in Norman?

• The color guy called Ray Allen “Reggie Allen.” I have no idea why. He also compared how much Phil Forte moves on offense to Ray Ray which is actually legit.

• I thought the refs were really good early on and mostly good throughout. Don’t try and be a star. Call egregious fouls but let most of it go. This isn’t difficult.

• There’s nothing I love more than Fran Fraschilla’s kid having a mini-meltdown on the bench after Spangler dunking all over Cobbins except for everything.

I could've gone my whole life without ever seeing Lon Kruger emphatically wiping his nose with a huge towel. #bedlam #okstate

• I love Solomon for what he is. That’s an awkward pick-setting big man who busts his bum right now but hey that’s all we get out of Cobbins most of the time anyway so I’m okay with it.

• Hickey looks naked without a headband.

• Here are all the Big 12 players who can shut down an inspired Le’Bryan:

Next game: Texas Tech at home on Wednesday.