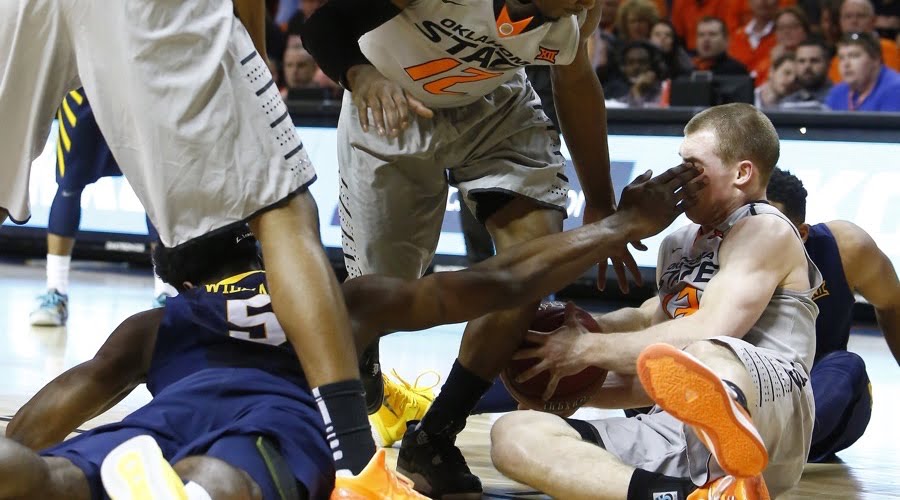 With 25 seconds left in Oklahoma State’s game with West Virginia on Saturday, Devin Williams stepped to the free throw line to try and extend a nine-point lead to 11 for the Mountaineers.

Williams made the first and missed the second and why am I telling you about two free throws that were taken with the game well in hand?

Two OSU players looked on as Gary Browne raced past them on Williams’ miss to get the offensive rebound and dribbled out the last 20 seconds as OSU moved to 7-8 in conference play on the season.

It was the 18th offensive rebound of the game for the Coonskin Caps to 20 total rebounds for the Cowboys.

In a mostly unwatchable game on Saturday — there were 54 fouls! — OSU twice went eight minutes without scoring a field goal and had more points from the free throw line (24) than it did on 2-pointers (18).

Bottom line: #OKState went stretch of 8:29 in first half, THEN another of 8:28 in second half without field goals. Hard to keep up that way.

Le”Bryan Nash only had 12 points and Phil Forte only took three shots and, well, that’s just not going to get it done with this team’s dearth of offense.

For West Virginia, Browne and Juwan Staten combined for 40 points and eight assists and completely dominated down the stretch.

There’s not much else to say about the game itself.

It was tied at half and the Pokes got run over in the second half. WVU led for the last 19 minutes. They pressed and easily broke OSU’s press and oh, here was OSU trying to elude WVU’s full court defensive pressure:

Well, it’s getting a little dicey when it comes to the NCAA Tournament. Only one Big 12 team ever has made the Dance with an 8-10 conference record and that was OSU last season.[1. All of the extenuating circumstances!]

With a home game against TCU and road battles with Texas Tech (which nearly beat OU today) and West Virginia it would seem like 9-9 is probable but 8-10 is in play.

With its best non-conference win coming against a 16-10 Memphis squad (according to KenPom) OSU might all of a sudden be facing a scenario in which it needs to win two of three to get off the NCAA Tournament bubble.

That three-game winning streak sure feels like a long time ago, doesn’t it?

• Nash and Cobbins combined for eight rebounds. That’s pathetic. Speaking of, how does Cobbins only have one double-digit rebounding game this season? I thought that’s what he was there for?

• I didn’t mind OU-Tech spilling into the OSU TV time as long as Tech pulled off the win in OT. Alas.

• Even weirder: A ranked team on February 22 is probably going to be on the bubble come NCAA Tournament time.

• All of the fouls. I thought the game at Kansas was bad and that only had 49 fouls. I think Big 12 refs think they get their own One Shining Moment video in March.

• Tyree Griffin is wicked fast (I’m trying to be more positive about college sports in general in 2015…this last week has tested me).

• Forte hasn’t been driving it very well of late (not drawing fouls, etc.). He and Nash shot 48 percent from the field in the first nine Big 12 games and just 37 percent since then coming into today.

• Kinda scary this was the only top 25 matchup today.

• Staten is a badass. He would thrive in any conference in any era. I hope WVU goes deep in the Tournament just so we get to watch him.

• OSU was in the bonus with 12:39 left in the second half and never got it closer than eight from then on. That’s awful.

• It never ceases to amaze me that OSU doesn’t press teams more. We always say this is a halfcourt team but it isn’t. Or it shouldn’t be. You have dudes that can run and nobody hits transition 3s like Phil Forte hits transition 3s.

But by all means let’s keep running those halfcourt sets.

• The announcers mentioned in the first half that Travis Ford went over numerous ways OSU would beat WVU’s press…I presume they meant with the announcers and not with his actual team.

• Nash or Forte didn’t score until 14 minutes into the first half.

• What do you think Bob Huggins wears to weddings and funerals?

He has a marryin' and buryin' windbreaker RT @pistolsguy: I wonder what Bob Huggins wears to weddings and funerals.

• Did Keiton stay out on the court when they honored the 1965 team at halftime or was he helping out with stuff in the locker room?

• Bob Huggins is going to hire Houdini Newberry for his grandkids’ next birthday bash.

• At least we shot 89 percent from the line? (being serious this time)