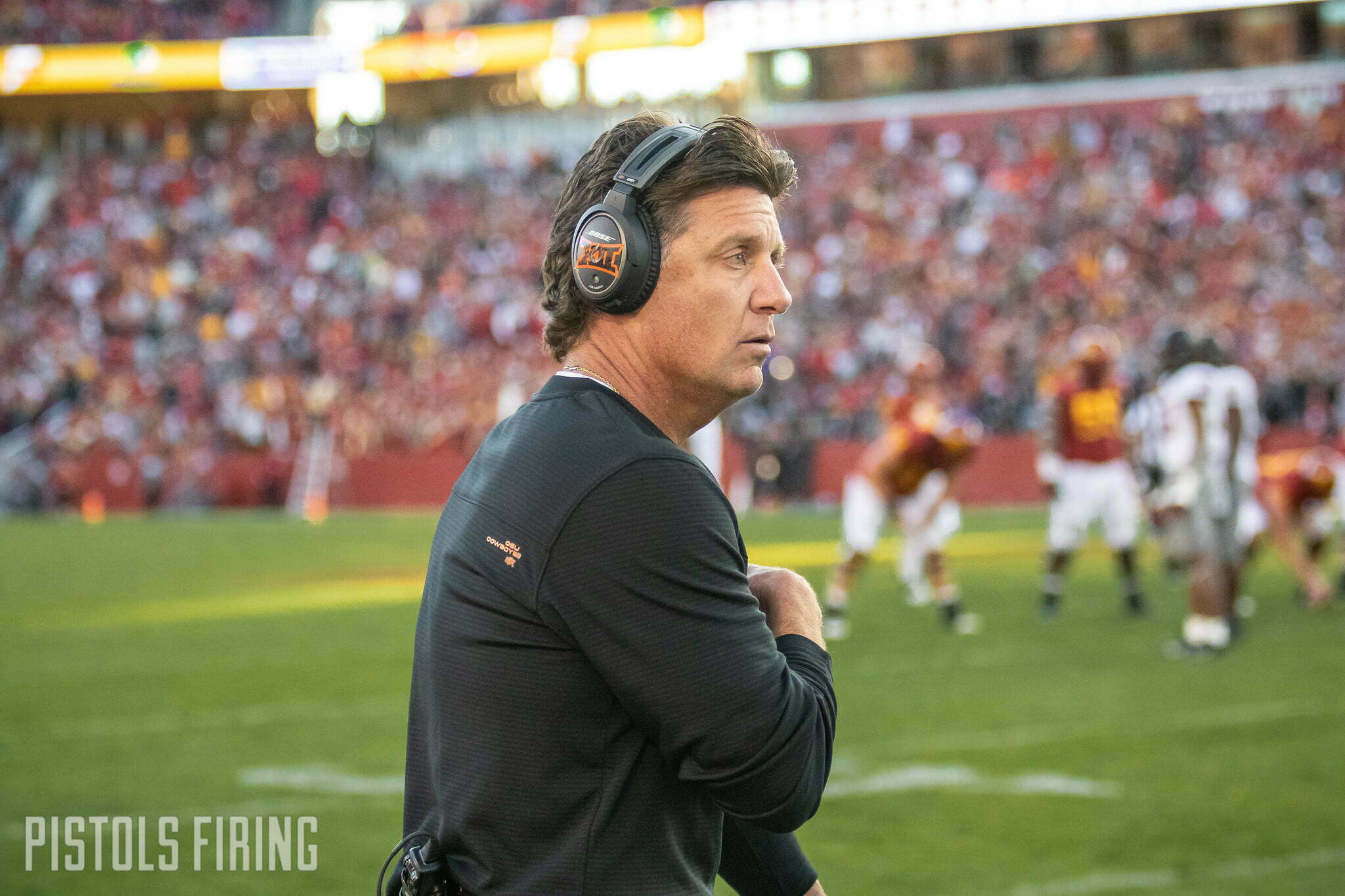 Just a couple of weeks ago, Oklahoma State was in the driver’s seat to Arlington. But thanks to injury and inconsistent play, the Cowboys viered off into a ditch somewhere on I-35.

After consecutive disappointing trips to the state of Kansas, the Cowboys are back in Stillwater this weekend and in need of a win in the worst way. To get that W, they’ll need to answer a few questions. Here are the first three that came to my mind.

1. How Do the Cowboys Move the Ball (without Spencer Sanders)?

It’s unclear whether or not OSU’s all-conference QB will return this weekend or at all this season. Mike Gundy likes to play his injury cards close to the vest. Whether or not Sanders can go on Saturday, the biggest question for the Cowboys is how they move the ball and score points on defense that’s doesn’t allow teams to do either.

The Cyclones lead the Big 12 scoring defense (ninth nationally) and total defense (10th in the FBS) allowing just 16.3 points and 284.4 yards per game. The Cyclones also lead the league in both rushing and passing defense.

“We all know about their defense,” said Gundy on Monday. “I don’t know, I know they’re ranked probably in the Top 10 in the country in defense.They’re very good on not giving up a lot of points, a lot of yards, so we’ll have to work really hard to come up with a good plan. But I’m convinced the guys will commit this week and play hard.”

A Kansas State team that dropped 48 on the Cowboys only mustered 10 points against the Cyclones a couple of weeks earlier. With a possible backup quarterback and injury holes all over their depth chart, the Cowboys staff will need to figure out some ways to manufacture first downs, or this could be an ugly one.

2. Can the Cowboys Take it Back?

The Cowboys have not been able to force many takeaways so far in 2022 — just nine total for ninth in the Big 12 — but when they have, they’ve mostly come out on top. OSU is 5-1 when forcing a turnover this season. The Cowboys forced three in the win over Texas, but zero in their last two losses to Kansas State and Kansas.

Why do I bring this up? Because there might be some free balls out there should Jason Taylor II be up to snagging one.

Iowa State quarterback Hunter Dekkers has shown a propensity to be dispossessed. He leads the Big 12 (T-4th nationally) with 10 interceptions in nine games. He’s also lost two fumbles this year. If the Cowboys can take advantage of his careless ball-handling — and not repeat their own four-TO performance from Lawrence — it could give them the leg up they need.

3. Who Takes the First Lead? (That Might be Your Winner)

As tough as the Cyclones are to score on, their offense has not benefited from the stiff competition in practice. Iowa State is dead-last in the league in scoring offense, rushing offense and total yards gained. The Cyclones showed life in a 31-14 win over West Virginia last week which broke a five-game skid. But it was the first time they’d scored 30 in conference play.

If Sanders/Rangel/Gundy can squeeze out a couple of touchdowns in the first half, it might be enough to survive. The Cyclones aren’t built to come from behind, but depending on who is available the Cowboys might not be either.