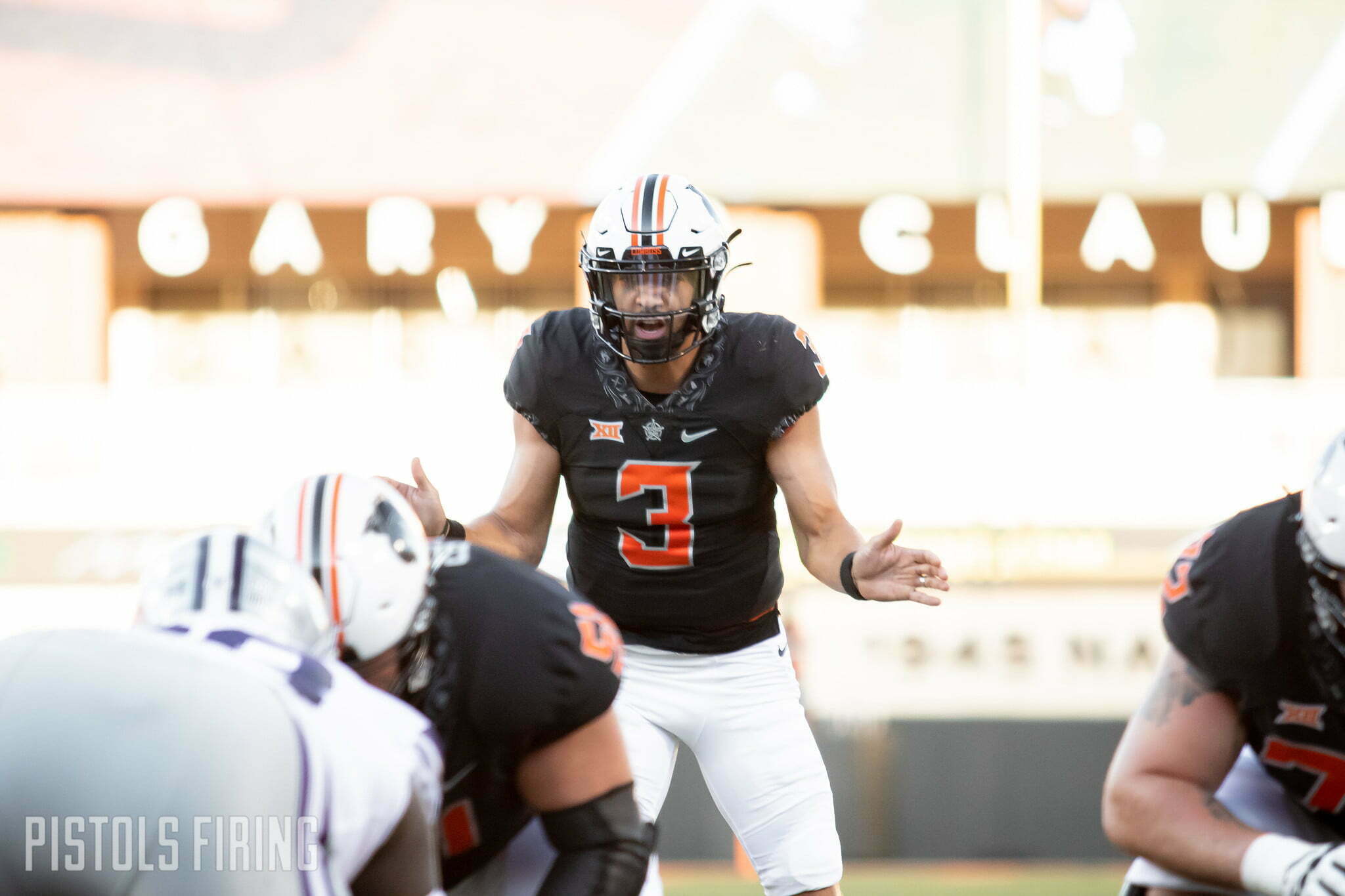 The Cowboys could be one win away from punching their ticket to Arlington.

But before the Cowboys make reservations for Dec. 4, they’ll need to get through a Texas Tech team that, despite a mid-year coaching change, is bowl eligible for the first time in four years and is fresh off a big upset.

In order to get past those Red Raiders, the Cowboys will have to win in one — or mostly likely more — of these three key matchups.

For the second-straight week, the Cowboys will be facing a quarterback in just his second career start. Last week it was TCU’s Chandler Morris; this week it’s Texas Tech’s Donovan Smith.

Tanner McCalister, one of OSU’s veteran DBs, talked about the challenge of defending back-to-back fresh quarterbacks.

“We kept getting to that last week against TCU with (Chandler) Morris,” said McCalister. “When you don’t have a lot of film, it kind of stands true, because whatever he puts on film, that’s kind of how you’re going to play. But, the one tricky thing is, we don’t know how their coaches have prepared for our defense.”

The Cowboys bottled up Morris for 125 yards and no scores one week after a 461-yard, three total touchdown performance in an upset over Baylor. He completed just 55 percent of his passes against OSU after completing 70 percent against the Bears. McCalister credited Jim Knowles for his ability to adjust and OSU’s defense for its aggressiveness. The Cowboys face a similar feat against an even more imposing phenom in Smith.

In an upset over Iowa State, Smith completed 78 percent of his passes for 322 yards and three scores through the air. At 6-foot-5 and 230 pounds, Smith is hard to bring down. He picked up 50 yards on the ground against the Cyclones.

It’s that seasoned secondary that allows OSU’s front seven to pin its ears back and feast on opposing backfields. OSU is tied for the lead in the nation in sacks, having given Morris and West Virginia’s Jarret Doege the paper-or-plastic treatment 15 times in the last two games. The latter is the Big 12’s passing leader; OSU held him to a season low.

Only six FBS teams have held opponents to less than 100 yards rushing in seven games this season: Alabama, Georgia, Iowa, San Diego State, Wisconsin and Texas Tech. Only the last two have done so in three-straight contests coming in.

The Cowboys have only failed to reach 100 yards on the ground once — and that was against an FCS team in the opener — and have really found their groove in the ground game as of late. That stout and stacked RB stable, and OSU’s front line, are brimming with confidence after a dominant 447 rushing yards and eight (!) rushing touchdowns against TCU.

The recipe for OSU’s success is simple, but not easy to stop. As long as OSU’s ground game can chew up yards and minutes, its defense can continue to lock teams down. With a little support from the passing game, the Cowboys are tough to beat.

Spencer Sanders had one of the worst games of his career the last time OSU went to Lubbock. Here’s why I think he could be set up for one of his best on Saturday night.

As tough as the Red Raiders have been to run against, they’re giving up a lot of big plays through the air. Texas Tech ranks T-116th in passing defense nationally (last in the Big 12) and has allowed 377 yards per game during those aforementioned last three, as well as 11 passing TDs to just two INTs.

The Red Raiders also have shown a propensity to get beat deep, ranking eighth in the conference in opponent passing over 10 yards (99) and ninth in plays allowed over 20 (37). For reference, OSU leads the league in the former (63) and is T-2nd in the latter (27).

QB1 is playing the best ball of his career over the second half of the season. In Weeks 1-6, Sanders logged a touchdown-to-interception ratio of 7:5. In the four games since, it’s been 8:1. During that span he is averaging career highs in completion percentage (66%) and passer rating (158.09).

Coinciding with that uptick in performance and productivity, Sanders’ once depleted receiving corps has gotten healthy and those younger receivers that saw early snaps look to be the better for it. OSU doesn’t need to throw for 400 yards to beat anybody. But with plenty of playmakers to hit like Tay Martin, Brennan Presley and myriad dynamic youngsters, Sanders might do it anyway.

No. 3 just needs to continue playing controlled, complimentary football and making teams pay for leaving his dudes one-on-one. A team like Tech should give him the perfect opportunity to do both.