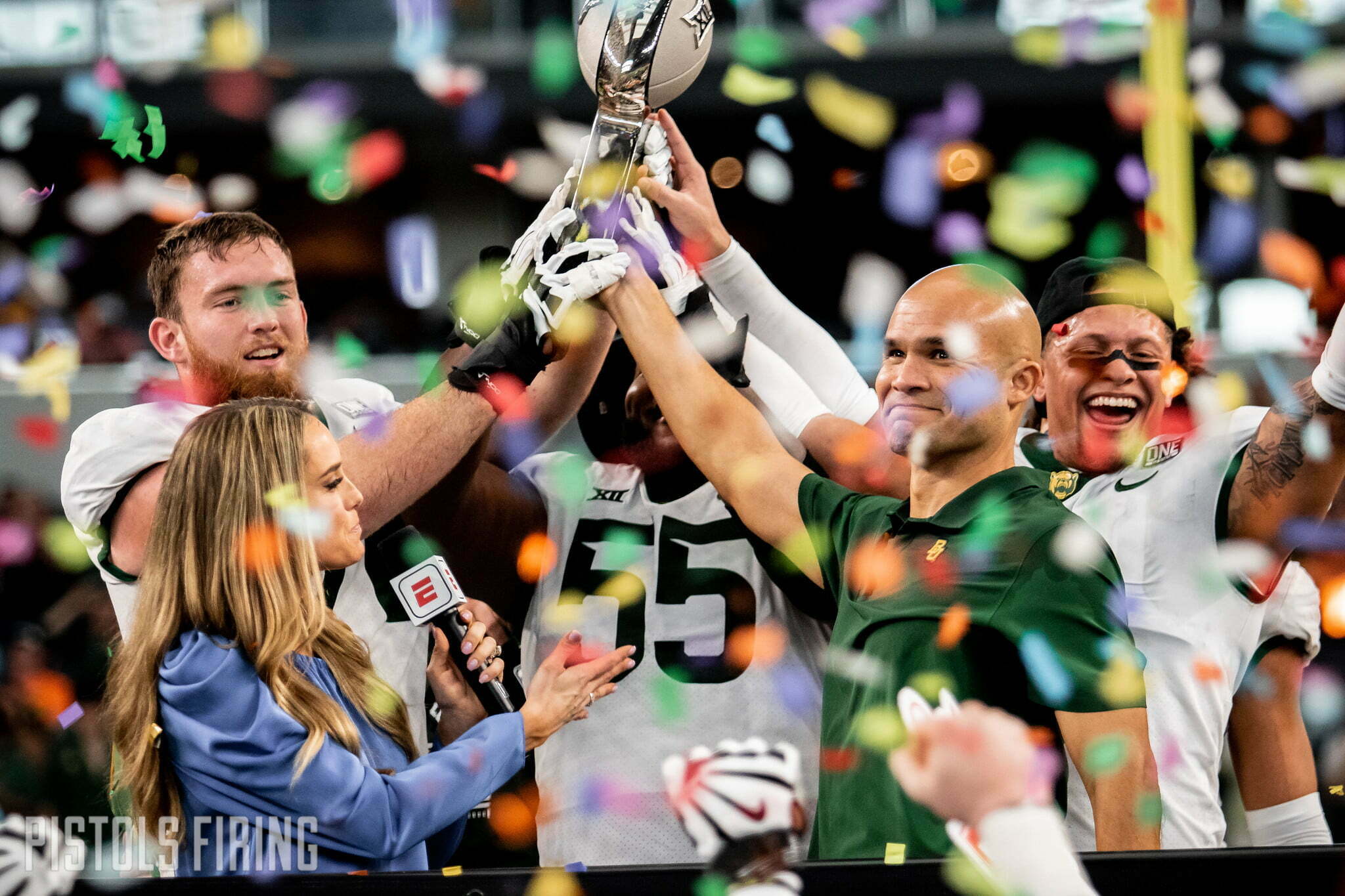 Some of the last looks Oklahoma State got of Dave Aranda came as he was raising the Big 12 trophy with green and yellow confetti floating around AT&T Stadium.

Oklahoma State and Baylor will lock horns again at 2:30 p.m. Saturday in Waco in a rematch of last season’s Big 12 title game. Aranda met with reporters Monday to preview the matchup. Here are three things he said.

Perhaps the biggest storyline entering this highly anticipated game will be Spencer Sanders.

Sanders, Oklahoma State’s quarterback, threw seven interceptions in two games against the Bears last season. OSU coach Mike Gundy on Monday credited most of those to the pressure that Baylor was able to put on Sanders in the pocket. Despite his defense’s success against Sanders, it doesn’t sound like Aranda is counting the Cowboys’ gunslinger out. Sanders has thrown 10 touchdowns and only one interception this season.

Aranda speaks in almost a philosophical way. He was asked directly about Sanders’ turnover issues against the Bears, and his message was essentially that was last year. If Baylor hangs its hat on what it did last season, that isn’t going to work.

“The appreciation of stuff that other guys have done can almost intoxicate you,” Aranda said.

Gundy and Aranda have a similar view on “big games.”

Gundy has always, to an extent, downplayed games like Bedlam, saying the team has to stay consistent week after week. Aranda echoed a similar sentiment when asked if he thinks his players will be extra amped for Saturday’s game after playing the Cowboys in the Big 12 Championship last season.

“I would like for it not to be, but then with us going through BYU, I would probably anticipate yes,” Aranda said. “They probably are. So, I see part of our job as coaches is to maybe bring it down a little bit to things we can control and things that are actionable and things that are kind of in the benefit of the task at hand, and all of that is way hard to do when it gets louder and the outside gets more. I would like to be able to bring it really down to where we can start the week strong and build the week all with inside stuff and not outside stuff.”

It appears the Bears will be without offensive lineman Khalil Keith and running back Taye McWilliams on Saturday.

Keith hasn’t played this season after a lingering injury from fall camp. He had started 15 games before this season.

McWilliams started the Bears’ first two games at running back. He has ran for 67 yards on 3.7 yards per carry before his injury.

In McWilliams place, Baylor has primarily used freshman Richard Reese and junior Craig Williams. That duo has combined for 93 carries, 488 yards and eight touchdowns on the year, but those numbers seem somewhat inflated by the level of competition. Against Iowa State last weekend, they combined for 31 carries, 114 yards and one score.

Offensive lineman Grant Miller also went down with an injury in Baylor’s game against Texas State and missed the game against Iowa State, but Aranda said he anticipates Miller being back this week.