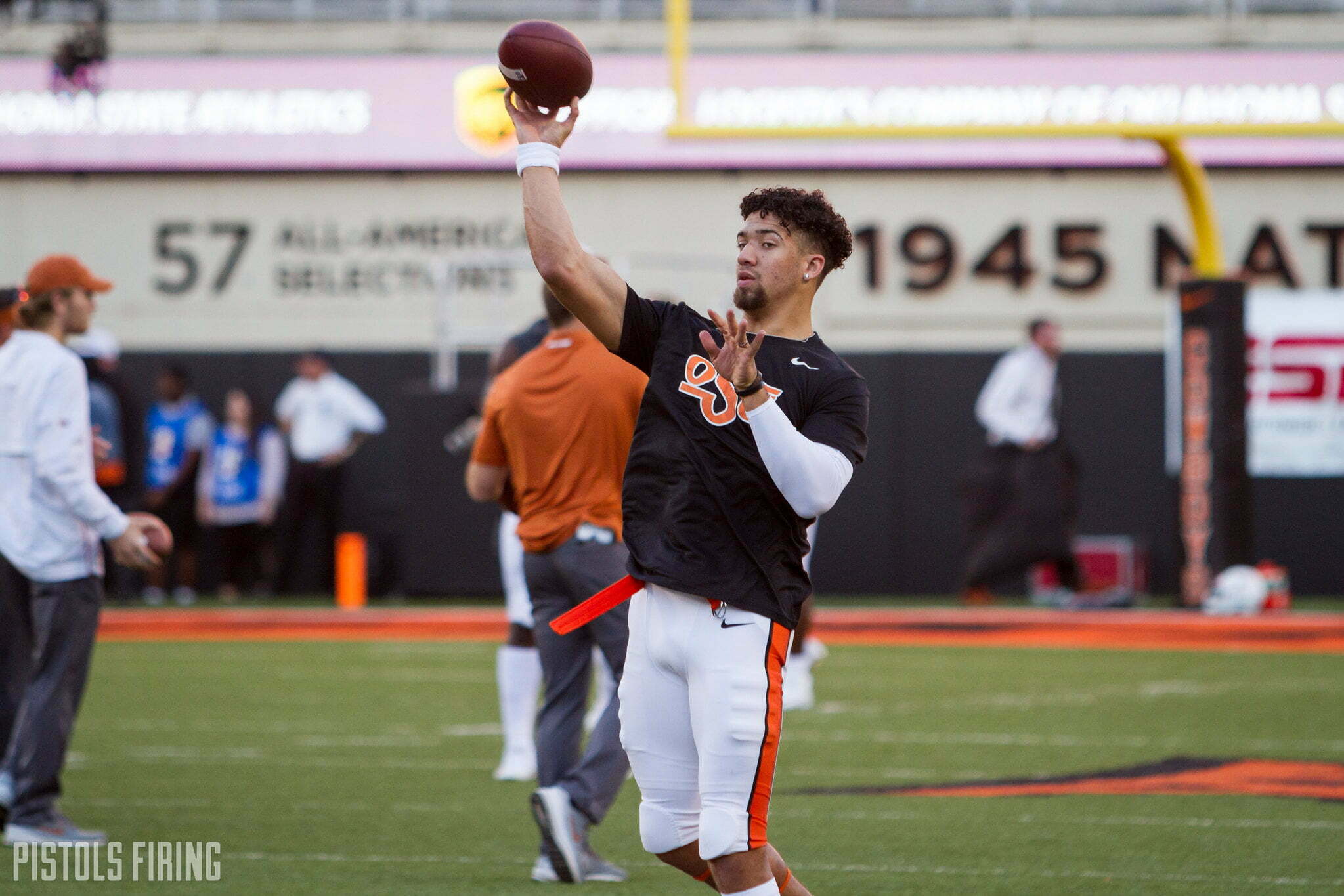 Oklahoma State’s annual spring game has been billed as a “big spring practice” for the past couple of weeks, and it’s listed as “2019 Spring Weekend” on OSU’s website.

So needless to say, I’m not sure what I expect from Saturday whether that be drills or a light scrimmage of some sort. I imagine we’ll find out more on that when Mike Gundy meets with the media on Wednesday.

Whatever happens, there will be football players there, football players who the OSU fan base has waited to see in action for a while now. Here are three things I’ll be watching for on Saturday.

This will be the first extended look OSU fans have at Dru Brown and Spencer Sanders in orange and black.

With the anticipation that has built up over the past year, every throw Sanders and Brown make might seem like a highlight of the weekend. Depending on the what exactly they’re doing, it might be hard to get any insight into who might have the leg up on the quarterback race, but any sliver of a ball being thrown might be able to hold folks over until the fall.

With as big a deal as replacing a quarterback in a Big 12 offense is, at least it’s just one guy. There will be a ton of new faces on the Cowboys’ defensive front.

Colorado transfer Israel Antwine is probably the most intriguing at this time. Antwine is listed as a defensive tackle, and at 6-foot-4, 295 pounds, he is quite the load. However, Antwine also played on the edge some as a Buffalo, and apparently, that’s not out of the question for his time in Stillwater.

Antwine is only a sophomore, but he started 11 games and played 457 snaps in the Pac-12 in 2018, and he was recently granted immediate eligibility.

Martin is another guy who will have the chance to prove himself this season. A defensive end from Oologah, Martin said he expects to continue to split reps with Mike Scott throughout the spring and into fall camp. Although he is only a redshirt sophomore, Martin is one of the more experienced guys in the group, a group that lost six contributing defensive linemen from last season.

Other guys to keep an eye on in the trenches are Brendon Evers and Cameron Murray.

There are also decisions to make at linebacker with Calvin Bundage, Amen Ogbongbemiga, Devin Harper and Kevin Henry all in the mix. OSU has to replace the Justin Phillips’ steady play from 2018.

So whether it’s drills or a live scrimmage, it’ll be interesting to see who is where and who the first groups out there are.

3. The Embarrassment of Riches at Receiver

Kasey Dunn has options as to who he wants to fill Tyron Johnson’s void.

There is C.J. Moore, Patrick McKaufman, Braydon Johnson, Jonathan Shepherd just to name a few. All will likely get a solid number of snaps in 2019, so who starts and who doesn’t might not matter all that much, but like with the quarterbacks, the public hasn’t seen too much of what those players can do.

Moore has been the buzz of spring ball thus far. He’s up weight from when he arrived in Stillwater last fall, and he’s making toe-tapping, one-handed touchdown catches that make their way onto OSU’s social media. Moore has been a bit of a fan-favorite since he committed to OSU from Tulsa Union High School, and his redshirt season has only built that anticipation.

McKaufman probably would’ve contributed to OSU’s 2018 team if an ACL injury wouldn’t have ended his season before it started. He is another Oklahoma kid from OKC Douglass, who went to NEO as a quarterback before finding his way to Stillwater. At 6-foot-6, McKaufman is the tallest receiver on the roster. In the second week of spring ball, Gundy said McKaufman was still a little hesitant with that knee, but a week later he said he had already improved.

Redshirt sophomore Braydon Johnson’s speed has been talked about quite a bit this spring, and it looks like this will be the year it’ll be released in Boone Pickens Stadium. Johnson said he has played more in the slot this spring, so he could relieve Landon Wolf and Dillon Stoner, but at 6-1, he could also hold his own out wide.

All of these guys will play, so it again just comes down to where and how much. It’s a little ridiculous that the Cowboys have the “king of contested catches” in Tylan Wallace, a veteran Dillon Stoner and Landon Wolf, who worked his way up from a walk-on to a starter. Now add to that the twin towers of Moore and McKaufman and Johnson’s speed.