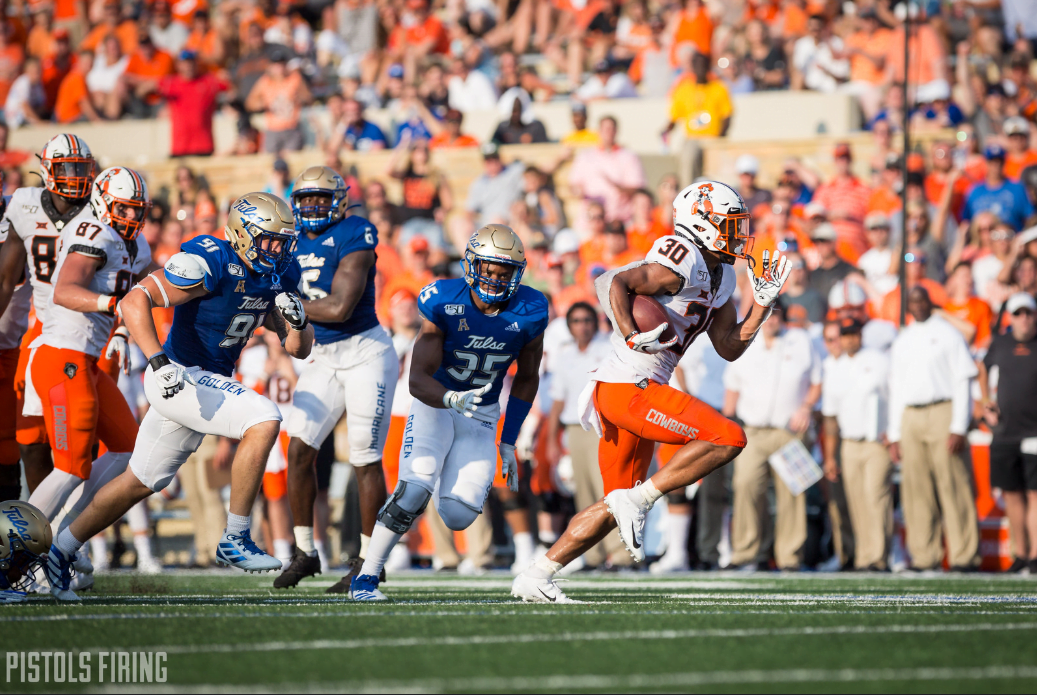 You can learn much more about yourself in adversity than when things just fall your way. When we looked at OSU’s nonconference slate in August, it didn’t seem like there were any true tests, and that was the case through two weeks.

But the Cowboys stubbed their collective toe in Tulsa, and if not for a nice second half from their defense, could have tripped.

Whether Tulsa is a sneaky pick to win the American this year, or Oklahoma State just played down to its competition, I’m not sure (it’s probably a mixture of both). But the Pokes got their first real taste of adversity in their remote home game on Saturday.

Let’s see what we learned.

1. Chuba Has No Carry Limit

Oklahoma State rode its bell cow from start to finish and appears intent on riding him as far as he’ll take them. Chuba Hubbard set career highs in rushing yards (256) and carries (32!).

Aside from his eight-carry outing against an FCS opponent, Chuba is averaging 29 handoffs per game. I’m not sure that is sustainable, but it’s the tightrope act that OSU coaches are attempting to manage. On one side, you need him on the field for the offense to go and on the other you don’t want him wearing down before October. Let’s hope gravity doesn’t get the best of them.

There appears to be a significant step down in ability from RB1 to RB2, which is fine by itself. But either due to health or for other reasons, OSU doesn’t appear to have a ton of depth past LD Brown at No. 2. Young backs like Jahmyl Jeter and Deondrick Glass have been essentially nonfactors and transfer Dezmon Jackson has been an actual nonfactor. All three were thought to be promising depth pieces coming into the season. Someone else is going to need to be able to make plays when needed, and you’d like to have learned more about that position before heading to Austin.

Against Tulsa, Spencer Sanders didn’t look as sharp, threw his first interception, had his worst statistical outing and looked frustrated on the sideline. But he rebounded decently and, aided by his defense and playmakers, helped push the Cowboys to a win.

We learned a little bit about Spencer as a player and leader in his ability to improve after a lackluster second quarter and rebound in the third. How he comes out against Texas, win or lose, will teach us even more.

3. OSU’s Defense Has Some Grit

Spencer Sanders wasn’t the only one who would like to forget the second quarter from Saturday. Jim Knowles watched his defense give up back-to-back touchdown drives to the Golden Hurricane which gave the home team a 1-point lead at halftime.

The Cowboys defense also took the game over in the third quarter, allowing just 30 total yards of offense and holding Tulsa to 0-for-4 on third downs. The Golden Hurricane didn’t score after intermission and OSU allowed just 138 yards and 3.2 yards per play in the second half.

“They did outstanding,” said Spencer Sanders after the game. “They saved me from my poor playing for a little bit. Obviously, I’m going to say thank you.”

According to Mike Gundy, credit goes to Knowles and his staff.

“That was a really good job by our defensive coaches,” said Mike Gundy. They were able to adjust at halftime, and then our players took the information from the locker room to the field to shut them down.

“…We made the adjustments at halftime, came out and made plays, which is awesome by our defense and our coaches for their adjustments.”

The group was down a lot of bodies up front and getting a few of them back will be paramount to its success against the Longhorns next week. But at least Knowles and his crew showed it can make adjustments when needed and that its group can improve throughout a game.